The southern Chinese city of Shenzhen wants local restaurants to take dogs and cats off their menus as the country clamps down on the wildlife trade scientists suspect led to the deadly coronavirus outbreak.

Reuters reports a new city regulation states only nine meats that are permitted for consumption, including pork, chicken, beef and rabbit, as well as fish and seafood.

“Banning the consumption of wild animals is a common practice in developed countries and is a universal requirement of modern civilization,” the notice said.

“Although the trade in Shenzhen is fairly small compared with the rest of [Guangdong] province, Shenzhen is still a huge city and is larger than Wuhan, so this would be very significant and could even have a domino effect with other cities following.”

The public will have until Thursday to respond to the draft proposal, according to Reuters.

The annual Yulin Dog Meat Festival is one of the most controversial food festivals in China and sees thousands of dogs cruelly killed, skinned and cooked with blow-torches before being eaten by the locals, as Breitbart News has reported. 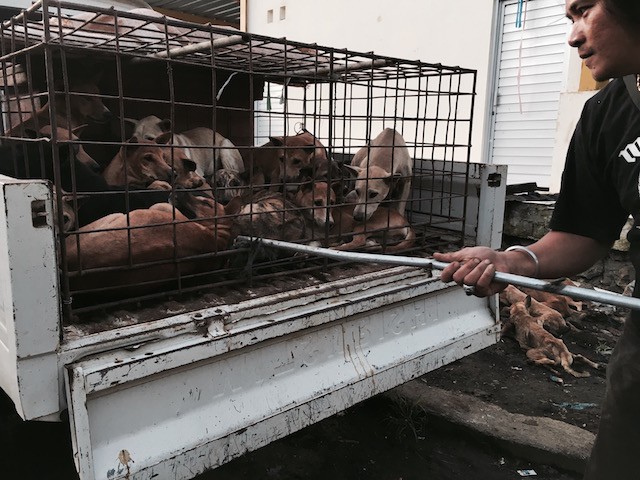 The Yulin Dog Meat Festival sees organizers routinely skin, boil, hang, and cut the limbs off of dogs while they are still alive. (Picture courtesy Animal Hope and Wellness Foundation)

The festival began in 2010 and occurs every year on the first day of the summer solstice. Those who partake believe that eating dog meat cools the body in the summer months.

Each year in China, over 10 million dogs and four million cats are reportedly murdered for their meat. Most of these dogs are domestic pets stolen from families or strays taken from the streets and sent to notorious slaughter houses.

Most slaughter operations have closed in the past two months because of restrictions on moving dogs across provincial borders, Li said.

Beijing is yet to revise its wild animal protection law, but the passage of the proposal was “essential” and “urgent” in helping the country win its war against the epidemic, wrote state newspaper People’s Daily.

The exact source of the novel coronavirus, known as COVID-19, remains unconfirmed. Scientists speculate that it originated in bats, snakes, pangolins, or some other animal.