Tsai Ing-wen delivered her second inauguration speech on Wednesday, vowing that she would continue to lead Taiwan “in the values of democracy and freedom” and rejecting China’s efforts to colonize the island.

Tsai – of the Democratic Progressive Party (DPP), which opposes compromise with China on the island’s sovereignty – won a commanding re-election victory in January and delivered her inauguration remarks virtually, as the Chinese coronavirus pandemic has made the large gatherings typical of inaugurations impossible. The Chinese Communist Party condemned Taiwan for re-electing Tsai and openly rejected the fact that Taiwan is a functional, democratic, sovereign state with no government ties to Beijing.

In her remarks, Tsai insisted that the policy of “One Country, Two Systems” – the one in place in Hong Kong, where Beijing has sovereignty over the territory but promises to respect local laws – is unviable for Taiwan because of its status as an independent state. She also affirmed that China has “a duty to find a way to coexist over the long term” with Taiwan, just as Taipei has with Beijing.

“We are willing to engage in dialogue with China and make more concrete contributions to regional security,” Tsai promised, stating that her policies towards China would be guided by “peace, parity, democracy, and dialogue.”

“We will not accept the Beijing authorities’ use of ‘one country, two systems’ to downgrade Taiwan and undermine the cross-strait status quo. We stand fast by this principle,” Tsai said. She applauded the Taiwanese for resisting Chinese colonization:

We have resisted the pressure of aggression and annexation. We have made the transition from authoritarianism to democracy. Although we were once isolated in the world, we have always persisted in the values of democracy and freedom, no matter the challenges ahead of us. We will always remain committed to our common belief: Taiwan must help ourselves to help others, and when we help ourselves, others will help us.

Tsai did not spend much time dwelling on China, however. Instead, she applauded the Taiwanese people for their response to the Chinese coronavirus, widely deemed the best in the world. As of Wednesday, Taiwan has documented 13 days without a new coronavirus case – the virus’s incubation period is believed to be 14 days – and 38 days without a domestically transmitted case.

“Taiwan has amazed the international community twice. The first was our democratic elections, and the second was our success in the fight against COVID-19 [the Chinese coronavirus],” Tsai said. “Every single person in Taiwan is a hero. Vice President Lai and I are honored to take on the responsibility you have entrusted to us.”

“Taiwan has been deemed a democratic success story, a reliable partner, and a force for good in the world by the international community. All Taiwanese people should take pride in this,” Tsai affirmed, thanking those in the country who respected public health measures to contain the virus, healthcare workers, and “everyone who was quarantined or isolated at home, putting up with inconvenience in your daily life to keep others safe and healthy.”
“This sense of pride in our country, this community’s shared destiny, and the memories of these past months will live on in all of our hearts,” Tsai added, modifying a term that Chinese dictator Xi Jinping has attempted to popularize during his tenure – a “community with a shared future.”

For the first time in decades, the government of the United States congratulated a Taiwanese president on her inauguration. President Donald Trump notably broke with Carter-era protocol before his own inauguration in 2016 to speak with Tsai. This year, Secretary of State Mike Pompeo did the honors.

“Her re-election by a huge margin shows that she has earned the respect, admiration, and trust of the people on Taiwan. Her courage and vision in leading Taiwan’s vibrant democracy is an inspiration to the region and the world,” Pompeo said of Tsai in a statement. “As we look toward the future, I am confident that, with President Tsai at the helm, our partnership with Taiwan will continue to flourish.” 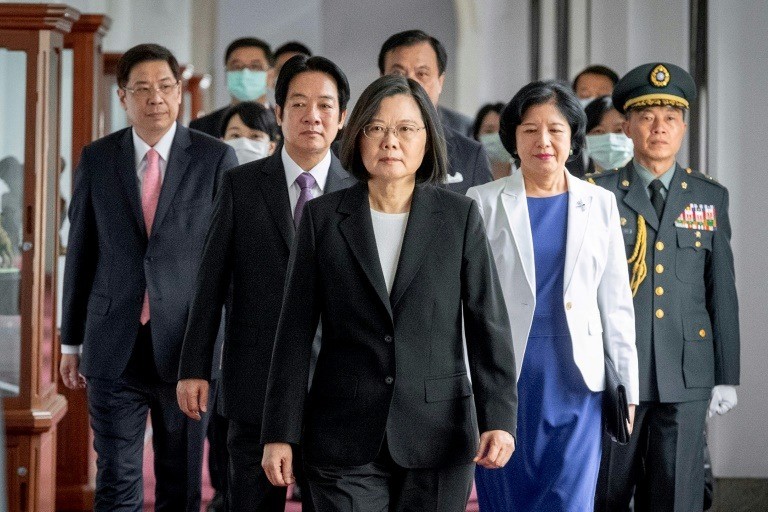 The Chinese Communist Party has condemned Taiwan for re-electing Tsai and openly rejected the fact Taiwan is a functional, democratic, sovereign state with no government ties to Beijing.(Taiwan Presidential Office/AFP Handout)

“There’s only one China in the world, and Taiwan is an inalienable part of the Chinese territory,” spokesman Zhao Lijian, who has accused the U.S. Army of manufacturing the current pandemic, asserted during his daily briefing Wednesday.

“These practices by the US side [Pompeo’s congratulations] are in serious violation of the one-China principle and the three China-US joint communiqués, and constitute grave interference in China’s internal affairs. China deplores and condemns them,” Zhao added.

“We solemnly inform the US that ‘Taiwan independence’ will only lead to a dead end, and attempts to condone and support ‘Taiwan independence’ are doomed to fail,” Zhao threatened. “Practices that undermine China’s core interests and intervene in China’s domestic affairs will be met with forceful fightback, which will not to the slightest extent impede the historical trend of China’s reunification.”

Zhao’s words were milder than many remarks by more senior officials in the Communist Party during Tsai’s last term. Foreign Minister Wang Yi remarked in January, upon her re-election, that Taiwan’s supporters “will stink for 10,000 years.” In October, dictator Xi warned that anyone supporting Taiwan “will perish, with their bodies smashed and bones ground to powder.”