There was no “Generational Dynamics World View” posting on Sunday because Comcast crashed, and the internet was unavailable most of Saturday and Sunday. I apologize to my readers for any inconvenience. 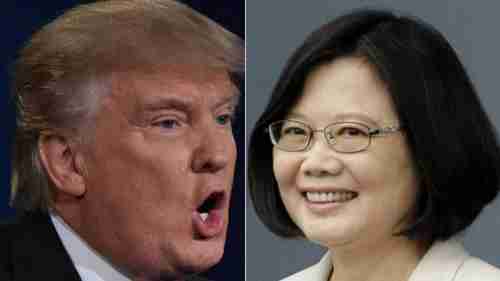 On Friday, Taiwan’s president Tsai Ing-wen had a “shock” 10-minute phone conversation with US President-elect Donald Trump. As usual, the mainstream media have reported this story in the most incompetent way possible. I saw and heard so-called “experts” talking on the BBC and CNN ranting and raving how this was going to cause a war. The printed mainstream press referred to it as a “major crisis.”

The utter incompetence of the mainstream media in dealing with this story was amazing. We know that the SAT scores of students have been falling for decades, and now it seems like the reporters at the NY Times, NBC News, CNN and others apparently majored in sociology and women’s studies in college, so they have no clue what journalism is.

Furthermore, having spent eight years simply re-publishing statements and press releases from the Obama administration, these reporters have absolutely no journalistic experience that would allow them to report a story on their own, which reporters were able to do before the rise of Generation-X.

As regular Generational Dynamics readers know, China has been aggressively preparing for full-scale war with the United States for years. They have developed one nuclear missile system after another, and manufactured perhaps hundreds of those missiles, with no other purpose than to destroy American cities, military bases and aircraft carriers. These developments have been deliberately planned, and it’s clear that China plans to attack at a time of its own choosing, not to be triggered in a panic because of a ten-minute phone call.

Furthermore, China did not launch a war after much worse provocations. Tsai Ing-wen, president of the pro-independence Democratic Progressive Party (DPP), won an overwhelming and decisive electoral victory in January. China was outraged, but didn’t start a war.

In the July 12 ruling on the South China Sea, the United Nations Permanent Court of Arbitration eviscerated China’s claims to the South China Sea in a legal challenge brought by the Philippines. China was FURIOUS and thoroughly humiliated by the decision, and issued one angry, contemptuous statement after another, but didn’t launch a war.

So it was really pretty obvious that China wasn’t going to launch a war over a ten-minute phone call. The Gen-X so-called “journalists” at the BBC, NY Times, and CNN could have figured that out as easily as I could. In addition to being incompetent as journalists, they are emotionally traumatized by the enormous humiliation they suffered in the election results after aggressively supporting Clinton during the campaign with some of the most moronic “news” reporting in history.

As I’ve been writing for years, Generational Dynamics predicts that the world is headed for a new world war, the Clash of Civilizations world war. The allies of the West will include Japan, India, Russia and Iran. The enemies will be China, Pakistan, and the Sunni Muslim countries. This will be the world’s greatest war in history.

So a war with China is coming, and would be coming irrespective of whether Trump or Clinton had won. It would be nice if the mainstream media could start reporting actual news instead of fatuous nonsense, but that’s apparently too much to hope for. Xinhua and International Business Times and South China Morning Post (Hong Kong)

From the Truman Doctrine to renewed nationalism

I’ve written many times about the Truman Doctrine, from President Harry Truman in 1947, which made America policeman of the world. The justification is that it’s better to have a small military action to stop an ongoing crime than to let it slide and end up having an enormous conflict like World War II. The Truman Doctrine was reaffirmed in President John Kennedy’s “ask not” speech, and every president since WW II has followed the Truman Doctrine, up to and including George Bush. Barack Obama is the first president to repudiate the Truman Doctrine, essentially leaving the world without a policeman. As I’ve written numerous times, I believe that the cause of Obama’s numerous foreign policy disasters is his repudiation of the Truman Doctrine. From various apology tours to flip-flopping on the Syria Sarin gas red line to prematurely pulling American troops from Iraq, Obama’s rejection of America’s role as policeman of the world has left the world without a policeman, and we’ve seen the results.

As I’ve been writing for over ten years, America and much of the world are in a generational Crisis era, and I’ve documented numerous examples in country after country of what always happens in a generational Crisis era — the rise of xenophobia and nationalism. This has happened in China vs Japan, China vs Vietnam, India vs Pakistan, Europe vis-à-vis the Muslims and the Roma, and America vis-à-vis the Muslims and the Mexicans.

Fortunately, and much to my great relief, president-elect Trump has almost completely walked back his xenophobic remarks about Mexicans and Muslims, and this gives me hope that, unlike our current president, he’s a person who is able to learn, though that remains to be seen.

However, even without the xenophobia, Trump has tapped into the increasing mood of nationalism that we see in America, and other countries. We saw the growth of nationalism in the anti-EU Brexit vote in Britain, we saw it on Sunday with the anti-EU referendum vote in Italy that may force the resignation of Matteo Renzi, and we saw it in the phone call with Taiwan’s president.

Nationalism is not the same as the Truman Doctrine. The Truman Doctrine provides guidelines for a military action whose purpose is to prevent a foreign war from spiraling into a major war. A police analogy would be the Los Angeles police taking action to prevent further fighting between the Crips and the Bloods. Nationalism is much more ideological, as if the LA police took the side of the Crips for ideological reasons and fought with them against the Bloods.

Foreign policy for the last eight years has repudiated the Truman Doctrine and been highly anti-nationalistic and hence highly ideological, with highly undesirable outcomes. It remains to be seen in the next few years whether America follows a new ideological foreign policy, dictated by nationalism, or whether it is a return to a reasoned, methodical foreign policy, such as the one dictated by the Truman Doctrine, followed by every president from Harry Truman to George Bush. A war between China and Taiwan is inevitable, at a time of Beijing’s choosing, no matter what president Trump does, but too much nationalism can make it appear that we’re taking sides. With the Clash of Civilizations world war approaching, a reasoned, methodical, non-ideological foreign policy is what we need.