Xi made the remarks from Beijing, which is currently not among the areas most affected by the floods. Chinese state media did not offer any indication Xi would soon travel to affected areas or meet with flood victims.

Many of the areas most affected by the floods – exacerbated by the overflow of the Yangtze, China’s longest river spanning nearly 4,000 miles – are also among the most affected by the Chinese coronavirus crisis. The river runs through the center of Wuhan, the city where the pandemic started.

“Chinese President Xi Jinping has called for the greatest efforts to brave challenges and go to the frontline of flood prevention and rescue and relief work to ensure the safety of people’s lives and property,” Xinhua reported. The agency said Xi called the situation “grim,” but did not quote him offering any concrete solutions.

“China has entered a crucial period of flood control, Xi said, calling for Party committees and governments at all levels to take responsibilities and go into the frontline to guide flood control work,” Xinhua reported. “Authorities should take more effective flood control measures and do solid work in monitoring and early warning, safety hazards checking at dikes and reservoirs, emergency response and resettlement of the affected people, Xi said.”

Other than “strengthening coordination” and distribute supplies “in a more scientific way,” the report did not indicate that Xi had specified any actual policy initiatives or actions his cadres should take to protect citizens.

Agence France-Presse (AFP) reported on Monday that “hundreds of rivers” have overflowed in the country, affecting 27 provinces and killing over 140 people as of that day.

“Thirty-three rivers have reached record highs, while alerts have been issued on a total of 433 rivers, officials from the Ministry of Water Resources said during a briefing in Beijing on Monday,” AFP noted.

In addition to the dead, nearly 40 million people are at risk of being displaced or killed and 28,000 homes have been destroyed, AFP added.

China’s Ministry of Water Resources (MWR) and State Flood Control and Drought Relief Headquarters announced on Sunday that it had raised the emergency level in the country to Level II, the second-highest in its system. Xinhua added to the disaster statistics published by AFP that the floods had caused over $11 billion in damages to crops.

Videos from China show dramatic scenes of rapid waters sweeping entire buildings away, some sinking into the Yangtse and others floating away. Jiangxi province – a central Chinese province bordering Hubei, whose capital is Wuhan – is experiencing some of the worst flooding leaving, according to the South China Morning Post, about 20,000 people without access to freshwater or electricity. One rescue worker, identified as Sun Jie of the Shangrao municipal fire brigade, told the Morning Post that rescue workers are focusing on saving the elderly who did not have a chance to evacuate before the floods came.

“Some elderly people remained in their homes with young children because their other family members went to work in the cities. They don’t really have anywhere else to go,” Sun told the Morning Post in a video report published on Saturday, “and they really want to protect their home appliances from the floods so they are reluctant to come out.”

Hubei province has been in a state of emergency for a week, one of the most severely affected areas in the country in part due to the presence there of the Three Gorges Dam, one of the Communist Party’s most prized engineering achievements. Authorities reportedly admitted last week that, rather than using the dam to block floodwater, it had opened the floodgates, sending it barrelling downstream into Wuhan. Chinese state media described the floods as a “test” for the dam.

The People’s Daily, the official newspaper of the Chinese Communist Party, cited “analysts” comparing the situation to 1998, the year when China experienced its deadliest floods in modern history.

“Analysts reassured the public that with the Three Gorges Project, which went into operation in 2003 and plays a critical role in mediating the water, a disaster on the scale of 1998 is unlikely to take place along the mainstream,” the People’s Daily claimed. One such analyst claimed that the dam could “hold the water in the upper reaches of the Three Gorges Reservoir, with Poyang Lake and other tributaries being able to discharge water into the Yangtze’s mainstream.”

In that same article, however, the People’s Daily published a photo appearing to show water gushing out of the sluiceways of the dam. 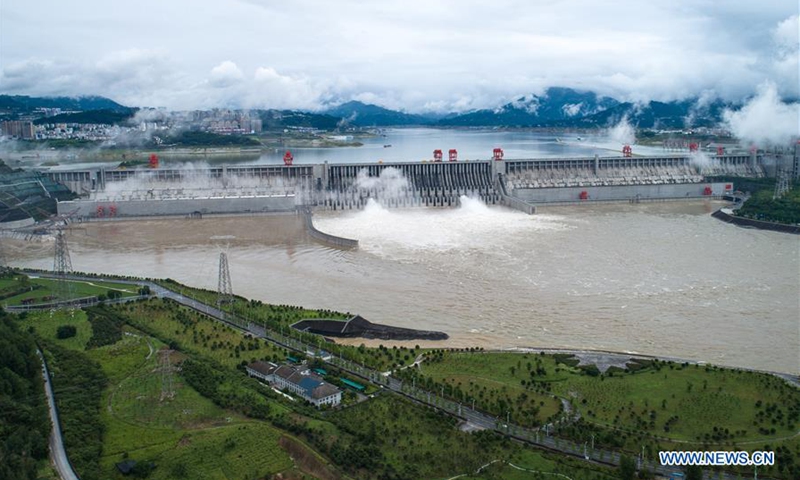 Satellite images published by the Taipei Times, and allegedly distributed by retired Indian Colonel Vinayak Bhat, claimed to show that the Chinese government had begun releasing floodwaters back into the river five days before announcing it had. If verified to be true, the images seem to show the water levels in the reservoir significantly lower than the height they would have to be to necessitate opening the floodgates, hinting at government malpractice.

If more evidence surfaces that Xi’s government worsened the flood situation by taking furtive actions at the Three Gorges Dam, the move would be the latest in several administrative scandals of the Xi administration that have led to calls for the dictator – who in 2018 forced through reforms to end term limits of Communist Party “presidents” – to resign.

A vaccine scandal in 2018 prompted protests nationwide that year, including some violent attacks by parents against local Communist Party leadership for injecting their children with expired, watered-down, and otherwise useless vaccines. Xi personally called Changsheng Biotechnology’s deliberate watering down of vaccines to make more profits “vile and shocking,” as it exposed hundreds of thousands of Chinese children to diseases like tetanus and diphtheria, and made a small number of arrests at the senior level of the corporation. All Chinese corporations are forced, by law, to obey the Communist Party.

Despite the scandal, Xi asserted in March that China would be fast-tracking a vaccine against the Chinese coronavirus to share with the world, without specifying and safety protocol that would prevent Chinese companies from also watering those down.

Like the current floods, Xi was also largely absent from China’s fight against the Chinese coronavirus pandemic. In April, following months of reports of thousands dead and ill in Wuhan, Xi made public appearances promoting China’s wetlands outside of Beijing, hundreds of miles from the nation’s foremost crisis. Xi also made public appearances in Beijing at the height of Wuhan’s epidemic, when Beijing had documented very few coronavirus cases.

Xi finally visited Wuhan in March – Chinese authorities announced the discovery of a new virus in January – to declare China’s epidemic over, despite multiple reports of ongoing infections in the city.