The Taliban released a propaganda video this week that allegedly depicts a commando unit of the terror group, seemingly equipped with high-tech arms, patrolling “sensitive areas” of Kabul, including the Afghan Presidential Palace, the Telegraph reported Thursday.

“The video showed the fighters more closely resembling the deposed Afghan government’s special forces than the Taliban’s typical image of rural guerilla,” according to the British newspaper.

Qari Saeed Khosty — referred to by the New York Times on August 20 as “one of the best-known pro-Taliban influencers” — posted the video to his Twitter account on August 17:

“The ‘Badri 313’ special forces squadron is in charge of security in Arg [Afghan Presidential Palace] and sensitive areas of Kabul city,” Khosty captioned the video post in Pashto.

The video shows some members of the alleged Taliban special forces unit interviewed by journalists, whose faces are not shown on camera, holding blue-capped microphones decorated with the yellow logo of the Taliban’s official propaganda website, Al-Emarah. The interview footage directly matches descriptions of previous Taliban propaganda videos included in the Times report on August 20.

“In Kabul, many Taliban-trained journalists have been busy on the streets, often holding a microphone with the logo of the group’s propaganda site,” the newspaper detailed.

“Badri 313,” the Taliban special forces unit allegedly depicted in the video posted by Khosty and other Taliban propagandists on August 17, is “believed to be named after the Battle of Badr, an early Muslim military victory where the Prophet Mohammad led a force of 313 fighters,” according to the Telegraph. 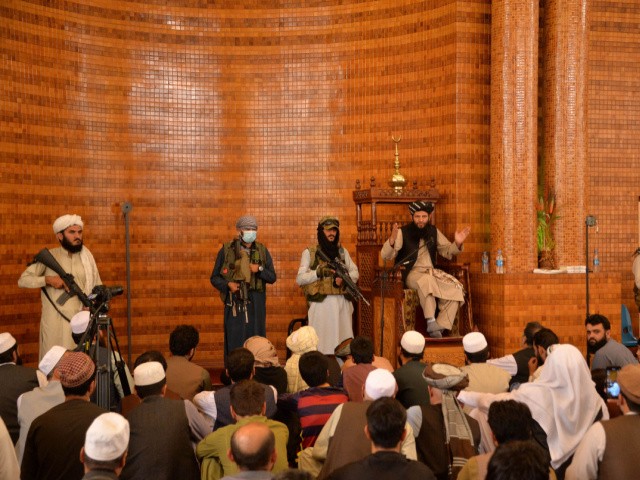 Armed Taliban fighters stand next to an Imam during Friday prayers at the Abdul Rahman Mosque in Kabul on August 20, 2021, following the Taliban’s stunning takeover of Afghanistan. (Hoshang Hashimi/AFP via Getty Images)

Aditya Raj Kaul, a faculty member at India’s state-run Internal Security Academy, told the Telegraph he believed the Badri 313 Brigade may have been deployed to Kabul “ahead of the arrival of senior Taliban figures” as the Taliban seized control of the capital city on August 15.

The Telegraph noted, however, that there “was no sign of the unit” at Kabul’s Hamid Karzai International Airport this week in non-Taliban propaganda video footage recorded by members of the establishment media. News footage of Kabul since August 15 instead showed “more ordinary Taliban fighters [trying] to keep order with AK-47s and sticks,” according to the newspaper.

“From 2017 onwards, the Taliban have trained what was called the ‘Red Units,'” Unnithan, who also serves as Executive Editor of India Today magazine, explained.

“These were special Taliban units that were attacking at night, and this was a big surprise for the Aghan forces because the Taliban were not known to have night-fighting capabilities,” he recalled.

“So they had raised these units with night-fighting capabilities, the best equipment … rocket-propelled grenades, anti-tank weapons, night-vision devices, the works,” Unnithan detailed. “And they were using them in special missions. They inflicted a lot of casualties on Aghan [government] units beginning from 2017 on in the province of Helmand.” 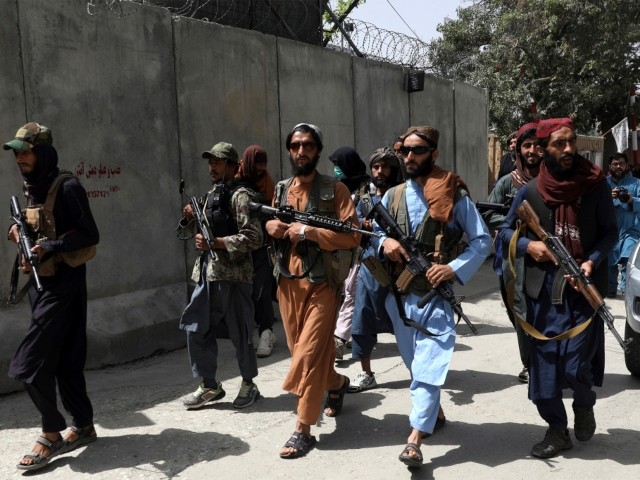 “So there has been a fair amount written and known about these units. And my guess is that the ‘Badri 313’ Brigade is nothing but a rebranded ‘red team’ of the Taliban,” Unnithan concluded.

“The [number] 313 is very important in Islam because it’s [in reference to] the 313 fighters that accompanied the [Islamic] prophet [Muhammad] in the Battle of Badr,” he noted.

Al-Qaeda has long been tied to the Taliban, as both are terror organizations based on Sunni Islam. Al-Qaeda in the Arabian Peninsula (AQAP) congratulated the Taliban on its successful reconquering of Afghanistan on August 18, three days after the terror group toppled the U.S.-backed government that ran Kabul since America’s invasion of the country in 2001.