ITV News on Saturday reported that two Taliban jihadists raped and beat a gay man in Kabul after they used social media to trick him into a meeting.

The ITV report implied the victim, referred to by the pseudonym “Hanan,” was looking for a way out of Afghanistan when he began communicating with disguised Taliban operatives. After three weeks of exchanging social media posts, Hanan agreed to meet with his new friends, only to discover they were Taliban.

“Two people raped him, they beat him, and then demanded his father’s number so they could tell him his son was gay,” ITV reported.

Hanan survived the attack but is now “living in silence, shock and shame.” 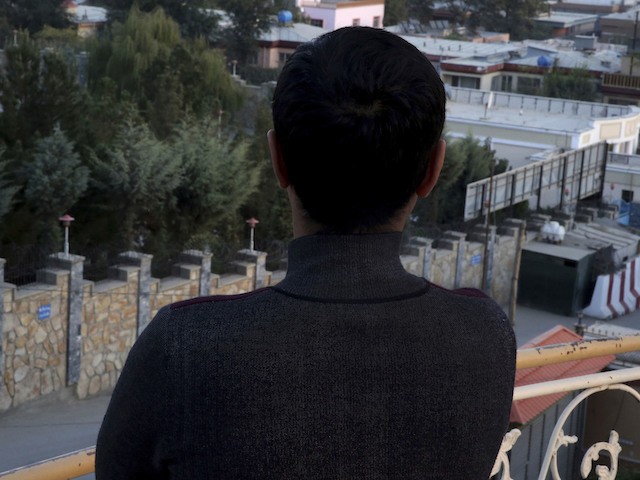 In this October 16, 2016 photo, Rameen, a young gay Afghan, poses with his back to the camera in Kabul, Afghanistan. To be homosexual in Afghanistan is to live in fear. Rameen and Naveed, another young gay man, have lost count of the number of times they’ve been lured into dangerous situations by men they believed they were meeting for dates. Both men describe being robbed, beaten up and blackmailed, and receiving death threats; they’ve even survived police “honey traps” that could have seen them thrown in prison without charge, simply on suspicion of being gay. (AP Photos/Massoud Hossaini)

A gay man in Kabul told British media last week that Taliban fighters abducted and killed his 24-year-old boyfriend soon after they entered Kabul on August 15.

It was 11 a.m. when the Taliban enter the city. I told him to go home, it’s dangerous. He said OK. I go to my home and he went to his. He said they found him. Two cars came, with Taliban in it. They said, ‘Where is his home?’ and beat him so much. They took him away – nobody knows where – and then they kill him.

“Afterwards they said they brought the body and cut his body into pieces to show the people that this is what we do with gay people,” he said.

Gabir claimed he later received a phone call from someone claiming to be a Taliban operative who said, “I know you are gay, before capturing Kabul we knew everything about you, you have three or four friends who are gay, you have a boyfriend. Once we settle here in Kabul we will not let you live. If we find you, we will kill you.”

Another gay man in Kabul told the UK Daily Mail on Friday that one of his friends committed suicide after the Taliban takeover.

“They kill us very brutally. Not like the others who they kill with a gun or a bullet. They will use fire, or they will behead or stone us, and they will enjoy it – it’s acceptable to them,” he said. 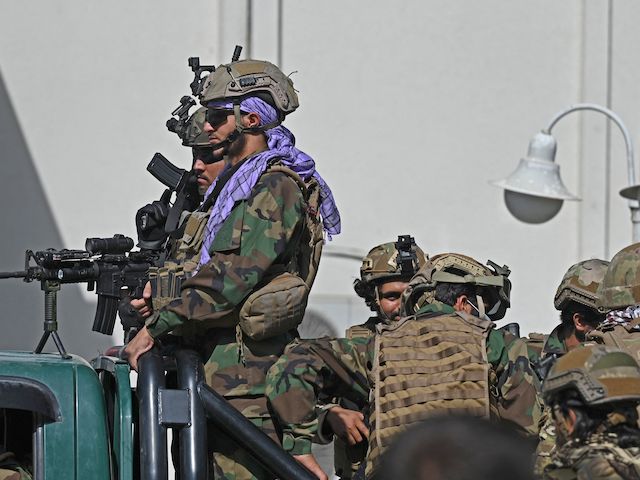 Taliban Fateh fighters, a “special forces” unit, patrol a street in Kabul on August 29, 2021, as suicide bomb threats hung over the final phase of the US military’s airlift operation from Kabul, with President Joe Biden warning another attack was highly likely before the evacuations end. (Aamir Qureshi/AFP via Getty Images)

NBC News on Sunday reported that many gay Afghans are fearful of Taliban abuse and murder. The U.S.-backed civilian government maintained criminal penalties for homosexuality, but the Taliban will surely be more aggressive about investigating reports of homosexual conduct and applying severe penalties, including execution, with very little legal process.

“The Taliban is in search of the gay people. They are going from street to street,” a 25-year-old gay man told NBC, warning the families of gay Afghans are also at risk.

The NBC report said it was “unclear” if gay refugees received priority consideration for evacuation, as demanded from the Biden administration by LGTBQ organizations in the United States:

On Tuesday, Rep. Chris Pappas, D-N.H., called on the State Department to be explicit about the inclusion of LGBTQ Afghans in its “Priority 2” designation, which includes individuals who worked for the U.S. government and whose affiliation with the U.S. puts them at risk.

“In the spirit of upholding our values and leading by example, we urge you to expand the Department of State’s P-2 designation granting USRAP access for Afghan nationals to explicitly include LGBTQ+ Afghans,“ Pappas’ letter, referring to the United States Refugee Admissions Program, states. “While we appreciate that the situation in Afghanistan is fluid, you have the power to protect the lives of countless LGBTQ+ Afghans from the horrors they face living under a regime that threatens their very existence.”

Earlier this month, over a dozen senators sent a letter to Secretary of State Antony Blinken asking for clarification on the department’s commitment to “protect vulnerable LGBTQI+ refugees and asylum seekers,” citing a February presidential memo affirming the administration’s commitment to advancing LGBTQ rights in U.S. foreign policy.

Gay rights advocates blasted the Biden administration for “what seemed like a lack of preparation” for evacuating Afghans at high risk of persecution by the Taliban. 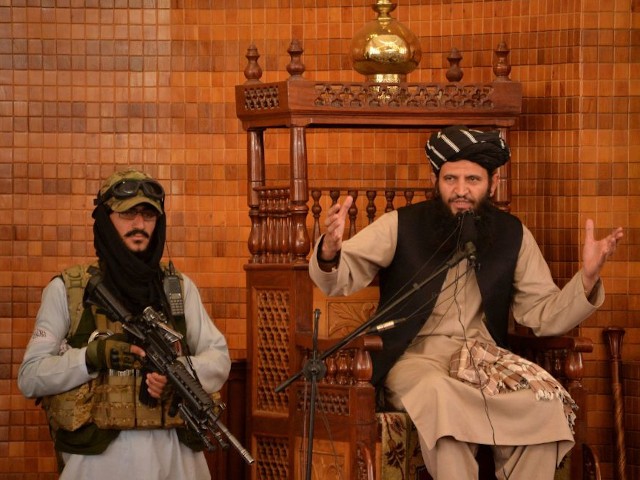 An Imam speaks next to an armed Taliban fighter during Friday prayers at the Abdul Rahman Mosque in Kabul on August 20, 2021, following the Taliban’s takeover of Afghanistan. (Hoshang Hashimi/AFP via Getty Images)

“What we are seeing this week was avoidable. We could have had a more robust evacuation process. This could have been done differently and in a coordinated manner,” Jenna Gilbert of Human Rights First told NBC News.

The Latin Times pointed out on Monday that while the Taliban has made some effort to pretend its new regime will be less hostile to women and religious minorities, it has not bothered to claim it will be less abusive to gays.

“According to a recent report, a judge closely connected to the militants averred last month that homosexual men needed to be stoned or buried alive,” the Latin Times noted.