More than 98 percent of Chinese youth hold the United States responsible for the “worsening” Chinese coronavirus pandemic, according to the results of a new Chinese government poll published by the state-run Global Times on Friday.

“[The] latest Chinese national youth survey shows that 95.7 percent of young Chinese don’t understand US’ behavior in the COVID-19 [Chinese coronavirus] epidemic prevention and control. And 98.3 percent of respondents believe that the US is responsible for the worsening global pandemic situation,” the newspaper reported on September 3.

The Central Committee of the Communist Youth League of China and the Social Survey Center of China Youth Newspaper polled 41,332 young Chinese nationals to conduct the survey. More than 60 percent of people interviewed said they believed the alleged “high cost of medical care, poor policies, hollow industries and lack of anti-epidemic materials” in America “contributed heavily to the rapid development of the epidemic in the US.”

“About 96.1 percent of respondents rated the overall performance of the US in combating the outbreak as ‘bad,’ with 86.5 percent rating it as ‘very bad,'” according to the Global Times. 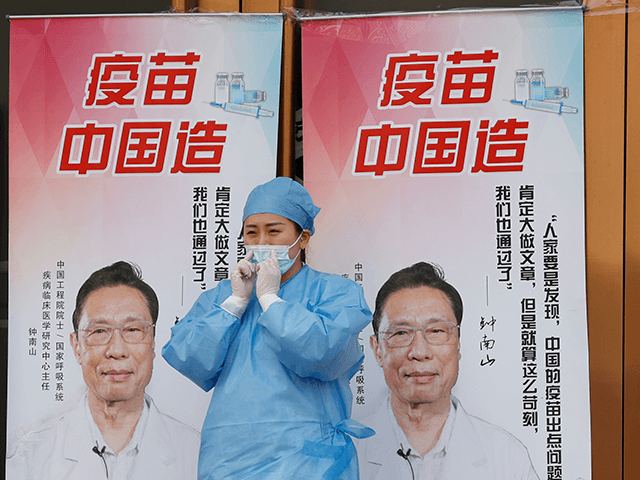 A medical worker adjusts her mask near propaganda boards showing famed Chinese medical expert Zhong Nanshan and the words “Vaccine China Made” outside vaccination center in Beijing Friday, April 9, 2021. In a rare admission of the weakness of Chinese coronavirus vaccines, the country’s top disease control official says their effectiveness is low and the government is considering mixing them to give them a boost. (AP Photo/Ng Han Guan)

The Chinese coronavirus originated in Wuhan, China, in late 2019. Chinese Communist Party (CCP) officials failed to properly address and contain Wuhan’s epidemic of the then-novel coronavirus, in large part due to efforts by Beijing to downplay the outbreak’s severity. Wuhan’s coronavirus infections traveled beyond the city to the rest of China within weeks and soon spread worldwide in the ensuing months. The outbreak eventually mushroomed into a full-fledged pandemic by March 2020 that remains ongoing.

China is currently suffering from a resurgence of its Chinese coronavirus caseload nationwide. Communist officials say they traced the spike to a coronavirus cluster infection first detected at Nanjing’s Lukou International Airport in eastern Jiangsu province on July 20. The handful of cases at the airport, which the Communist Party blamed on allegedly imported traces of the virus, soon spread throughout the greater city of Nanjing.

The outbreak occurred despite efforts by local government officials to lock down 30,000 Nanjing residents in the days immediately following July 20. The city’s epidemic has since proliferated and caused further outbreaks in several other major cities and provinces across China, including its national capital and seat of government, Beijing. The infections spread to Shanghai by late August, disrupting cargo imports into the major port city. Shanghai serves as one of China’s most important and strategic commercial centers and contributes greatly to the national economy.