TOKYO (AP) — Japanese Princess Mako quietly married a commoner without traditional wedding celebrations Tuesday and said their marriage — delayed three years and called unfit by some — “was a necessary choice to live while cherishing our hearts.”

The marriage to Kei Komuro cost Mako her royal status and she has taken her husband’s surname — the first time she has had a family name. Most Japanese women must abandon their own family names upon marriage due to a law requiring only one surname per married couple.

The couple’s marriage document was submitted by a palace official Tuesday morning and made official, the Imperial Household Agency said. There was no wedding banquet or other marriage rituals for the couple. Their marriage is not celebrated by many people, the agency has said.

“For me, Kei-san is a priceless person. For us, our marriage was a necessary choice to live while cherishing our hearts,” Mako told a televised news conference, using an honorific in speaking of her husband.

Komuro responded: “I love Mako. I live only once and I want to spend it with someone I love.” He said he hopes to be with Mako to share feelings and encourage each other at happy times and difficult times. 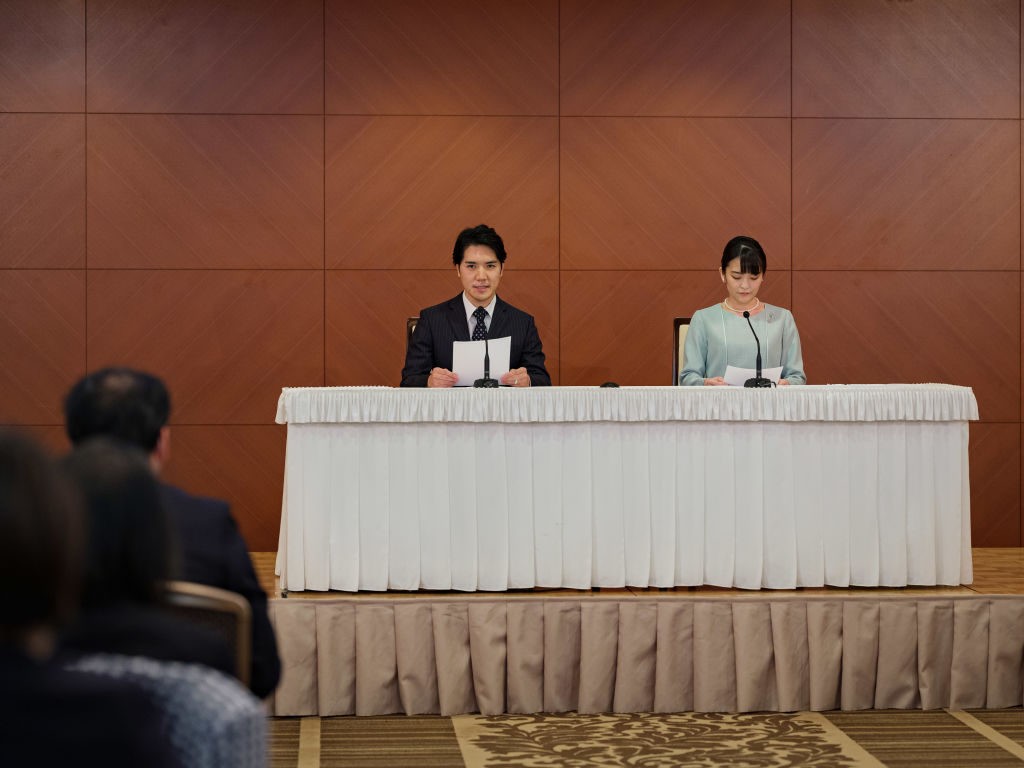 “I hope to have a warm family with Mako-san, and I will continue to do everything to support her,” he said.

Mako, who turned 30 three days before the marriage, is a niece of Emperor Naruhito. She and Komuro, who were classmates at Tokyo’s International Christian University, announced in September 2017 that they intended to marry the following year, but a financial dispute involving his mother surfaced two months later and the wedding was suspended.

On Tuesday morning, Mako left the palace wearing a pale blue dress and holding a bouquet. She bowed outside the residence to her parents, Crown Prince Akishino and Crown Princess Kiko, and her sister Kako, and then the sisters hugged each other.

The couple did not answer questions at the news conference as Mako had expressed fear and unease about responding to them in person. Instead, they provided written answers to questions submitted by the media beforehand, including those about his mother’s financial issues.

Mako is recovering from what palace doctors described earlier this month as a form of traumatic stress disorder that she developed after seeing negative media coverage about their marriage, especially attacks on Komuro. 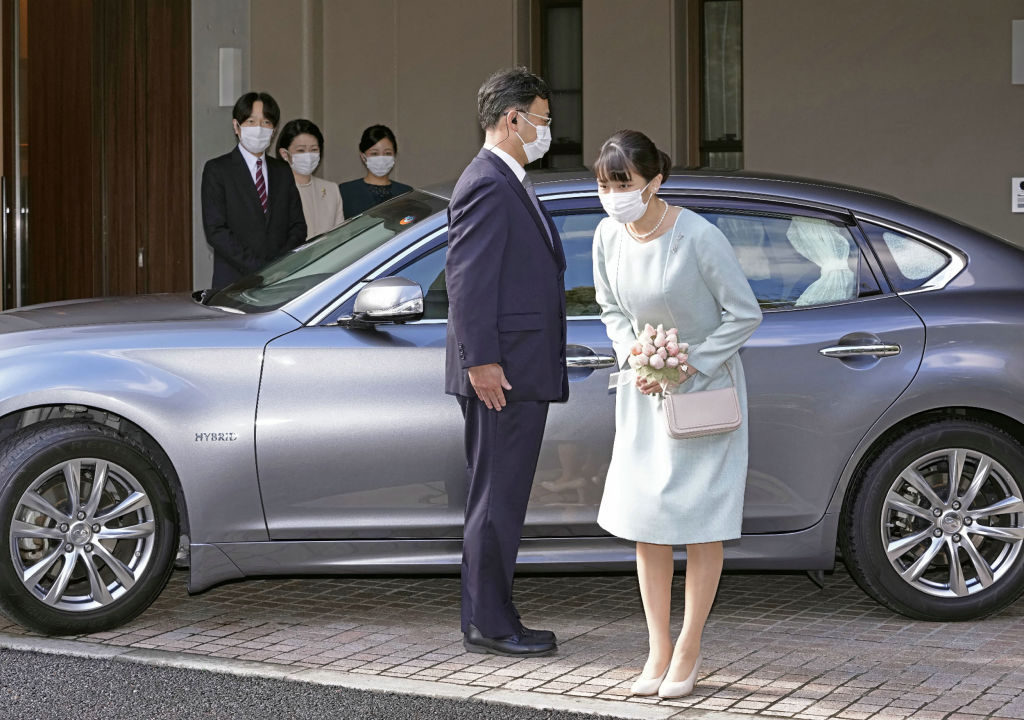 The dispute involves whether money his mother received from her former fiancé was a loan or a gift. Mako’s father asked Komuro to clarify, and he wrote a statement defending himself, but it is still unclear if the dispute has been fully resolved.

Komuro, 30, left for New York in 2018 to study law and only returned to Japan last month.

His hair was tied in a ponytail at the time and the look drew attention as a bold statement for someone marrying a princess in the tradition-bound imperial family and only added to the criticism.

Mako earlier declined the 140 million yen ($1.23 million) dowry to which she was entitled for leaving the imperial family, palace officials said. She is the first imperial family member since World War II to not receive the payment and chose to do so because of the criticism over her marrying a man some consider unfit for the princess.

The couple will move together to New York to start a new life.

“There will be different kinds of difficulties as we start our new life, but we’ll walk together as we have done so in the past,” Mako said, thanking everyone who supported the couple. 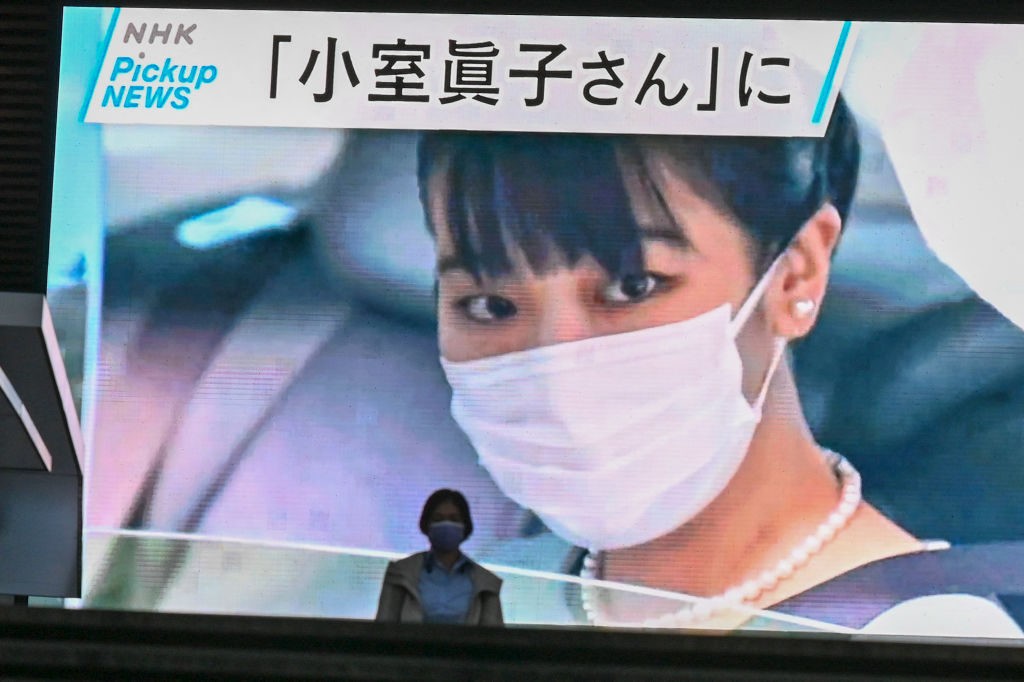 A screen displays news reporting the marriage of Japan’s former princess Mako, the elder daughter of Prince Akishino and Princess Kiko, and her husband Kei Komuro in Tokyo on October 26, 2021. (KAZUHIRO NOGI/AFP via Getty Images)

Mako, apparently referring to mental health issues, noted “many people have difficulty and hurt feelings while trying to protect their hearts.” She said, “I sincerely hope that our society will be a place where more people can live and protect their hearts with the help of warm help and support from others.”

Mako’s loss of royal status comes from the Imperial House Law, which allows only male succession.

Only male royals have household names, while female imperial family members only have titles and must leave if they marry commoners. The example of prewar-era paternalism is also reflected in Japanese gender policies that many criticize as outdated, including a law that requires married couples to use only one surname, almost always the husband’s.

The male-only succession practice leaves only Akishino and his son, Prince Hisahito, in line behind Emperor Naruhito. A panel of government-appointed experts are discussing a stable succession of the Japanese monarchy, but conservatives still reject female succession or allowing female members to head the imperial family.