Taliban jihadists in Kabul, Afghanistan, staged a “graduation” of sorts for drug addicts forced into a brutal withdrawal program allegedly meant to rehabilitate them, the Afghan Bakhtar News Agency reported on Monday.

Bakhtar describes itself as a “government” news agency, apparently in the hands of the Taliban since the terrorist organization took over the country in August. While no other state actor considers the Taliban the official government of Afghanistan, Taliban jihadists have been in charge of every government office in Kabul since former President Ashraf Ghani fled the country, allegedly with $169 million in cash.

The Bakhtar video shows men with shaved heads in blue uniforms marching in front of a Kabul “hospital” where they reportedly completed a “45-day treatment” for drug addiction. The agency declared the men “recovered.”

Afghanistan is responsible for the cultivation of as much as 90 percent of the world’s opium, used to manufacture heroin and produce a vast array of other opioid drugs. While the Taliban outlawed opium cultivation during its first stint in power in the 1990s, it heavily relied on opium and heroin sales to fund its terrorism while out of power, during which opium cultivation hit record highs. According to the BBC, the Taliban demanded a ten-percent tax from opium farmers in the territories it controlled even before seizing power in August, generating as much as $400 million a year.

In the immediate aftermath of taking over the country, Taliban spokesman Zabihullah Mujahid, tasked with leading the jihadists’ first formal press conferences, announced that the Taliban intended to eradicate narcotics use and production entirely.

“From now on, Afghanistan will be a narcotics-free country,” Mujahid claimed. “We are assuring our countrymen and women and the international community that Afghanistan will not produce any kind of narcotics.”

Mujahid also claimed that the Taliban had a particular interest in removing drug addicts from the streets of Kabul and helping them overcome addiction.

“Today when we entered Kabul we saw a large number of our youth who were sitting there under the bridges and next to the walls and they were using narcotics,” Mujahid told reporters. “This was so unfortunate. I got saddened to see these young people without any faith in the future.” 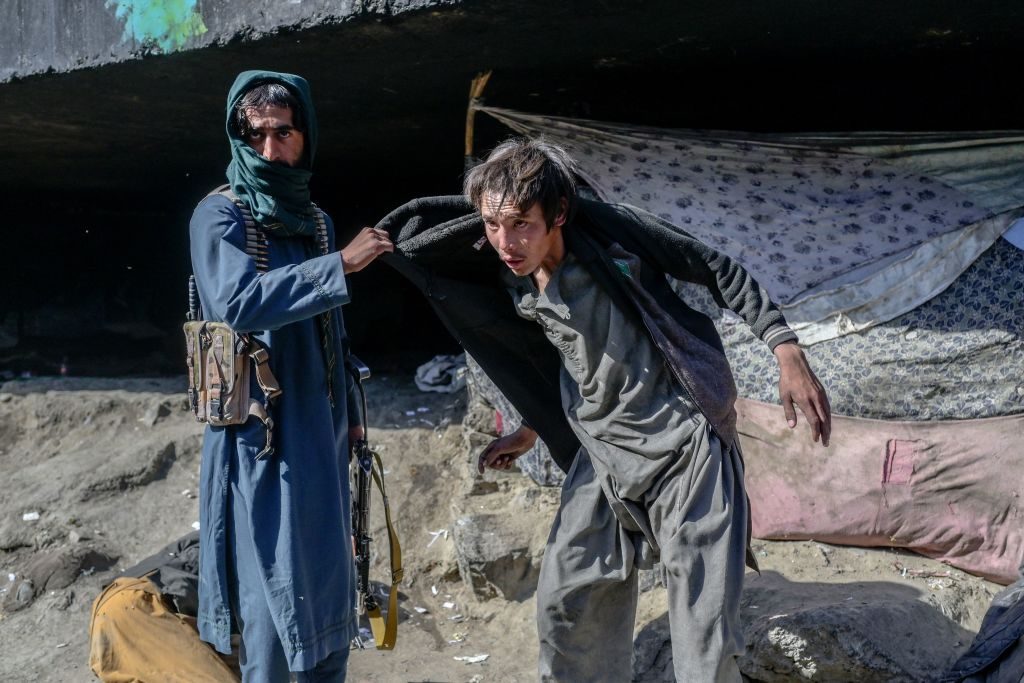 This picture taken on October 16, 2021 shows a Taliban member detaining a drug addict under a bridge where hundreds of addicted people gather in Kabul. – With shaved heads, oversized tunics and the frightened gaze of hunted animals, the drug addicts rounded up by the Taliban brace for 45 days of painful and anxiety-ridden withdrawal. (BULENT KILIC/AFP via Getty Images)

Mujahid asked the international community to give money to the terrorist organization and vowed it would use the money for the purpose of eradicating drug use. Taliban spokesmen have made it a priority to demand foreign institutions and states fund their efforts to impose an extreme sharia regime on Afghans, particularly in the aftermath of the World Bank and International Monetary Fund (IMF) freezing Afghan government assets to prevent the terrorists from accessing them.

The Taliban allowed at least two major international journalism institutions – the Associated Press and the Agence France-Presse (AFP) – to witness its alleged attempts to rehabilitate drug addicts. The news agencies found that Taliban terrorists were indeed organizing raids to arrest drug addicts en masse and remove them from the streets of Kabul, forcing them into “rehabilitation” centers. The jihadists used violence to detain the men, however, and appeared to force them into immediate, full drug withdrawal without methadone or other drugs used to control potentially deadly withdrawal symptoms for addicts of opioids and methamphetamines, which have also gained popularity in the country.

The AFP described one operation to trap drug addicts and take them into Taliban regime custody:

Two Taliban fighters, armed with M16 and AK-47 rifles, prod the comatose heroin and methamphetamine users with their gun barrels as outreach workers wrestle with men before forcing them to the vehicle. Raw sewage runs straight into the boggy river bed, and the stench of urine, faeces and vomit in the crowded drug den is overwhelming.

The gunmen fire a few shots into the air to assert their authority and shock the addicts, before about 20 are rounded up and whisked away.

“There is little methadone available to help wean the opium and heroin addicts, and nothing to remove the withdrawal pains for those being weaned off of meth, doctors say,” according to the AFP.

The AP noted in its coverage of the program this month that many of those being imprisoned in Taliban “rehabilitation” programs were suffering from mental illness, according to the doctors the Taliban has forced to run the program. Taliban jihadists did not appear to distinguish between the mentally sound and mentally ill when beating them in attempts to subdue and imprison them.

“On a recent evening, Taliban fighters raided a drug den under a bridge in the Guzargah area of Kabul. With cables for whips and slung rifles, they ordered the group of men out of their fetid quarters,” the AP narrated. “Some came staggering out, others were forced to the ground.” 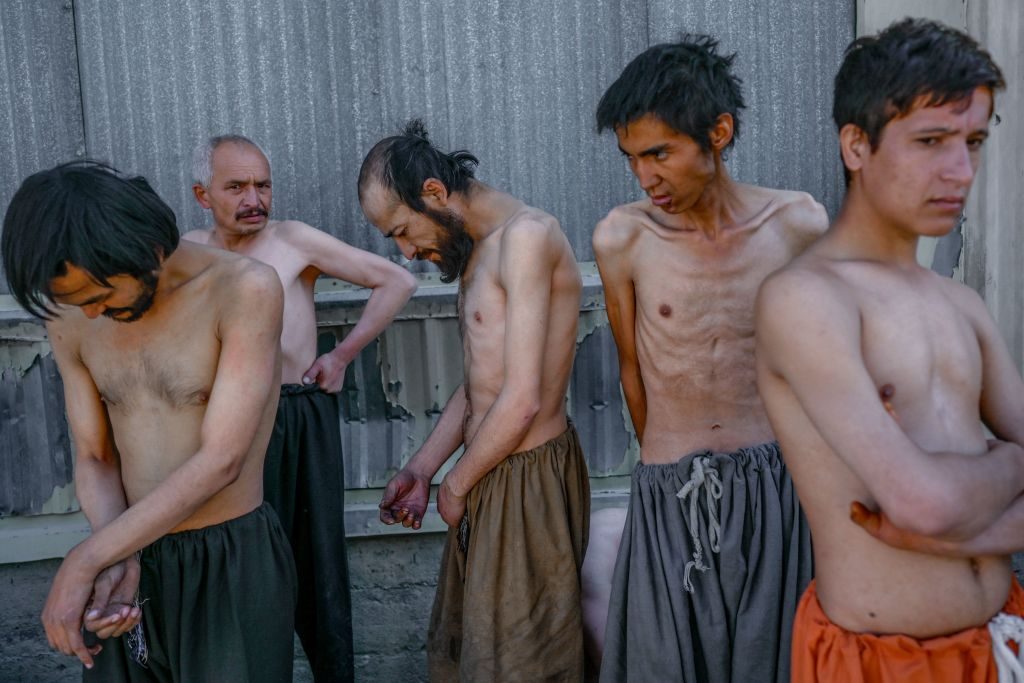 This picture taken on October 16, 2021 shows drug addicts waiting to be checked by officers after their detention at the Avicenna Medical Hospital for Drug Treatment in Kabul. (BULENT KILIC/AFP via Getty Images)

Shortly after the Taliban’s seizure of Kabul, the Afghan news agency Pajhwok interviewed addicts in the capital who implored the Taliban to use its newfound power to request international aid to help eradicate opium cultivation in the contry.

“International communities should help us so that we can have alternative crops,” one such individual told the agency. “If we can provide the people with alternative crops then, of course, very soon we can bring [the narcotics industry] to an end.”