Taliban spokesman Suhail Shaheen urged the International Monetary Fund (IMF) to release funds frozen following the jihadist group’s ouster of the government of Afghanistan in an interview with the Chinese government broadcaster CGTN on Friday.

Shaheen also emphasized foreign investment in Afghanistan would be critical to the success of any Taliban government. Shaheen, as well as most of the Taliban’s top media representatives, have repeatedly urged the world to invest in a Taliban-led Afghanistan, particularly courting the Chinese Communist Party but going so far as to suggest that the radical Islamist organization would be happy to allow American corporations to participate in the Afghan economy.

The Taliban seized control of the nation last weekend, surrounding the capital, Kabul, and prompting former President Ashraf Ghani to abruptly flee the country. Taliban jihadists proclaimed an end to the Afghan republic and the reinstallation of the Islamic Emirate of Afghanistan on Sunday night, repeatedly vowing an “inclusive” government and respect for women’s rights, within the context of their repressive interpretation of sharia, or the Islamic law.

Shaheen attacked the IMF, calling the move to prevent Taliban jihadists from accessing funding “not fair, an injustice.” A spokesman for the IMF explained Thursday that the organization had frozen the funds in response to a “lack of clarity” regarding who is actually running the country.

The move places Afghanistan alongside Venezuela — where the constitutionally legitimate president, Juan Guaidó, has no tangible power and socialist dictator Nicolás Maduro wields control of the country — and Myanmar, which endured a military coup this year, as nations whose chaotic government status renders them unable to access IMF resources.

In Friday’s interview, Shaheen also urged China to invest in Afghanistan, which has become a routine talking point for all the representatives the Taliban have tasked with international communication ties.

“China is a big country with a huge economy and capacity — I think they can play a very big role in the rebuilding, rehabilitation, reconstruction of Afghanistan,” Shaheen asserted.

“We have been to China many times and we have good relations with them,” Shaheen said. “China is a friendly country that we welcome for reconstruction and developing Afghanistan.”

Afghanistan is a critical part of China’s Belt and Road Initiative (BRI), a global infrastructure plan Beijing has sold as an attempt to reconstruct the Ancient Silk Road connecting eastern China to western Europe. China has used the BRI in countries that were not part of the Ancient Silk Road in Africa and Southeast Asia to offer poorer countries predatory loans later used to seize critical ports and railways and dominate local governments. The Communist Party has repeatedly expressed public interest in expanding its investments in Afghanistan and playing a larger role in the nation’s foreign policy. It also hosted Taliban delegations on several occasions in the past two years. 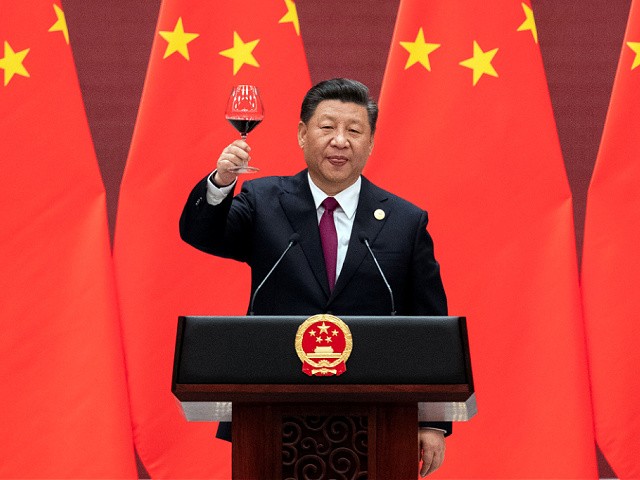 BEIJING, CHINA – APRIL 26: Chinese President Xi Jinping proposes a toast during the welcome banquet for leaders attending the Belt and Road Forum at the Great Hall of the People on April 26, 2019 in Beijing, China. (Photo by Nicolas Asfouri – Pool/Getty Images)

Shaheen gave CGTN a separate interview on Thursday in which he detailed the provisional plan for the structure of the Taliban government in the country. He noted that the group is hoping to choose a “supreme leader” and leadership council, but did not offer any details regarding the process for choosing who appeared on the councils. Taliban officials have repeatedly insisted that they will not hold elections and “there will be no democratic system at all” in the country.

Attempts to present the Taliban as capable of managing a bureaucratic government structure also appear to be part of the jihadist group’s ploy to attract foreign investment. While loudest in calling for Chinese businesses to participate in the Afghan economy, the Taliban has made clear it is open to all nations, including the United States, funding their regime.

Zabihullah Mujahid, a senior Taliban spokesman, clarified on Twitter on Thursday that the Taliban has not implemented any trade restrictions with any country in the world, presumably including America.

“The Islamic Emirate wants better diplomatic and trade relations with all countries. We have not said no about not trading with any country,” Mujahid wrote on Twitter. “The rumors that have been spread about this are not true and we reject it.”

Mujahid led the Taliban’s first formal press conference after taking over the country on Tuesday. He spent a significant amount of time courting foreign investment.

“We hope that as soon as conflict has done away with Afghanistan, we are going to build infrastructures of the economy. For this we are going to take actions for economic activities,” Mujahid told reporters. “The interactions with the international community, with other countries are going to continue. We are going to be working on our natural resources and our resources in order to revitalize our economy, for our reconstruction, for our prosperity.”

Mujahid asked the world to fund the Taliban economy: “the Islamic Emirate is requesting the whole international community that Allah willing, we can very soon, actually very quickly can change the situation, the country economically.”

Taliban officials also prioritized urging investors to make a Taliban regime wealthy during statements shortly before the fall of the Afghan government.

“Our message to businessmen, industrialists and capitalists is to carry out their work normally and serve their people,” a formal Taliban statement published last week read. “The Islamic Emirate creates a suitable environment for their business and, to this end, it will not hesitate to do everything in its power.”

In 2019, shortly before the Taliban began engaging in talks with the then-Trump administration, jihadi leader Mullah Sher Mohammad Abbas Stanikzai stated the group would one day hope to see American corporations invest in a Taliban-ruled Afghanistan.

“We have told them [the Americans] that after ending your military intervention, we will welcome U.S. engineers, doctors, and others if they want to come back for reconstruction of Afghanistan,” Stanikzai said. “And they have promised to do so.”