Communist China’s contribution to the COP26 climate conference in Glasgow, Scotland, was an emissions “pledge” that proposed increasing China’s pollution output over the next few years.

Chinese dictator Xi Jinping still claims his country will somehow reverse these trends in a very short period of time and become “carbon neutral” before 2060.

The South China Morning Post (SCMP) on Friday described China’s climate pledge as “modest” and “disappointing” to COP26 climate activists, who are pushing for “net zero” worldwide by 2030.

China, the world’s largest polluter, pumps out more greenhouse gas than all of the other industrialized nations combined. China is currently undergoing a severe energy crisis and last week ordered an “all-out” increase in coal production to fuel its power plants.

The SCMP reported China is trying to placate climate activists by building showpiece wind and solar energy projects – which is nonsensical as anything but theatrics, as solar panels and windmills do not magically absorb the emissions from coal-fired power plants – and stepping up reforestation projects, which do process carbon, but all of the trees in Asia would be very hard-pressed to devour all the gas China will produce as it burns record-breaking volumes of coal. 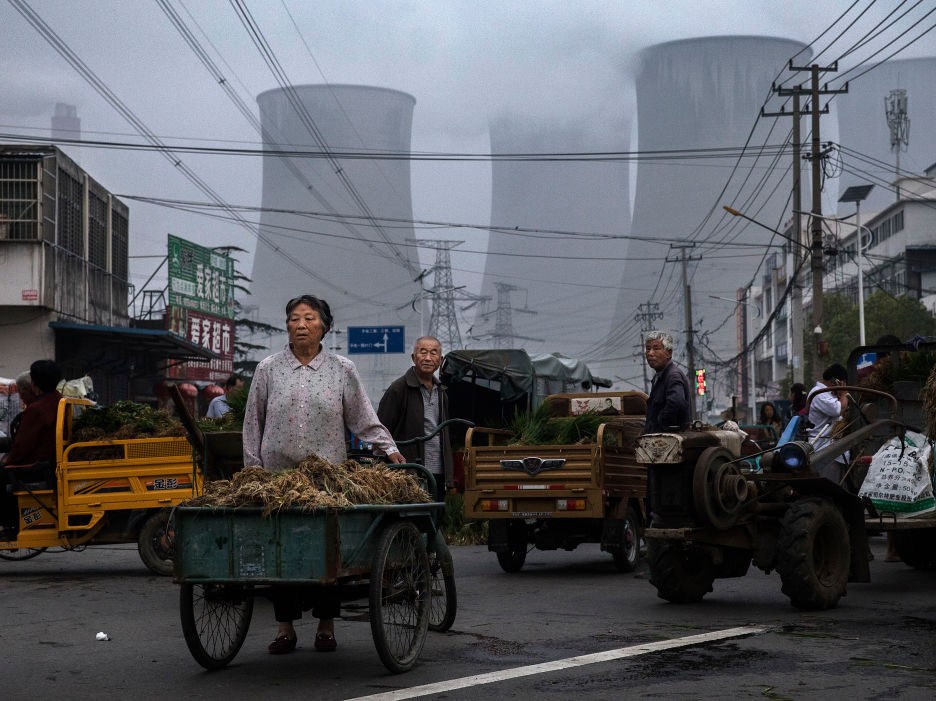 Chinese street vendors sell vegetables at a local market outside a state owned Coal fired power plant near the site of a large floating solar farm project under construction by the Sungrow Power Supply Company on a lake caused by a collapsed and flooded coal mine on June 13, 2017 in Huainan, Anhui province, China. (Photo by Kevin Frayer/Getty Images)

“China’s decision casts a shadow on the global climate effort. In light of the domestic economic uncertainties, the country appears hesitant to embrace stronger near-term targets, and this represents a missed opportunity to demonstrate ambition,” Li Shuo of Greenpeace East Asia told the SCMP.

“The planet can’t afford this being the last word. Beijing needs to come up with stronger implementation plans to ensure an emission peak before 2025,” Li said.

World Resources Institute vice-president Helen Mountford gave China credit for pledging not to build any more coal plants beyond its borders – after building three times as many coal plants as the rest of the world last year – but said Beijing must do more to “rein in greenhouse gas emissions this decade.”

The SCMP noted that Xi decided not to attend the COP26 summit in Glasgow, so he will not have to face any of these criticisms in person. The climate change movement never stays angry with China for long, so it will surely find a way to excuse the latest disappointment from Beijing.

CNN led the way on Friday by thundering that America is still the big problem because its “historical emissions,” dating back to the earliest days of the Industrial Revolution, are higher in total, even though China is currently generating well over twice as much carbon today.

“China is the world’s biggest user and producer of coal, consuming more than half the world’s supply. That’s in part because China produces so many products and materials for the world, which is why it’s sometimes referred to as ‘the world’s factory,’” CNN added sympathetically, previewing another talking point that will likely be heard from Chinese officials.