“Henan and Jiangsu provinces each reported three cases [on November 4] – their first since the latest outbreak began on October 17,” the SCMP relayed, citing data from China’s National Health Commission.

The commission does not include asymptomatic infections of the Chinese coronavirus in official case tallies. Henan documented 16 asymptomatic coronavirus infections on Thursday not counted in the province’s official caseload. Both Henan and Jiangsu are located in east-central China. Henan borders Hebei province, which surrounds China’s northern national capital, Beijing. Jiangsu is a coastal province located just north of Shanghai, China’s most populous city. 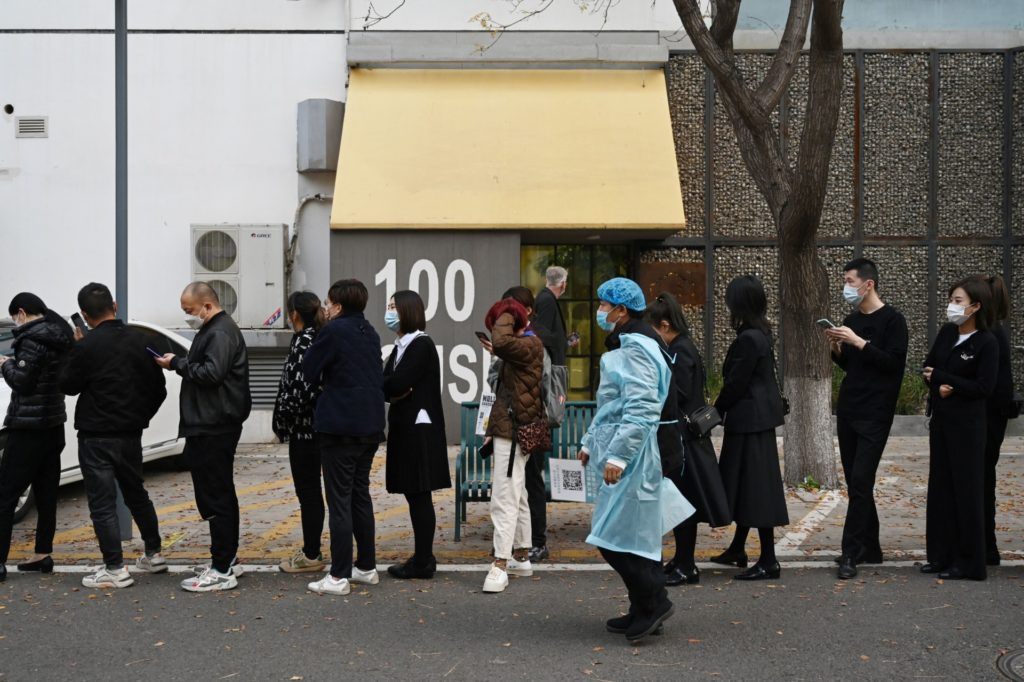 People line up to get Covid-19 coronavirus tests in Beijing on November 4, 2021. (Photo by GREG BAKER/AFP via Getty Images)

China’s northeastern Heilongjiang province, which borders Russia, has recorded more new daily coronavirus cases than any other Chinese region over the past week.

“After reporting the most cases for six straight days, it accounted for more than half of the latest infections with all but one of its 45 tally located in Heihe, the city on the Russian border,” the SCMP reported on November 4. “The other was in the provincial capital of Harbin.”

Hebei province reported 23 new symptomatic infections on November 4. Authorities detected 20 of the cases in the provincial capital Shijiazhuang, which is home to 11 million people.

China’s latest coronavirus outbreak began on October 17 after a tour group traveled from Shanghai to China’s Inner Mongolia Autonomous Region earlier that same month. According to the official narrative of the Chinese Communist Party (CCP), some of the tour group’s members contracted coronavirus from a foreign source in the Inner Mongolia Autonomous Region that likely originated in Mongolia. The tour group’s infected members, through their subsequent travels both regionally and nationwide, then spread coronavirus across China.

“Heilongjiang and other far northern regions are already bracing for winter, which could further worsen the epidemic,” the SCMP observed on November 4.

“For children, Covid-19 [Chinese coronavirus] symptoms will be relatively mild, but when combined with the flu, the symptoms will get serious,” Wu Liqun, the head of pediatrics at a Beijing hospital, told state broadcaster China Central Television (CCTV) on Thursday.