2021 was the year Communist China smashed the dream of freedom and democracy in Hong Kong, with only modest opposition from the civilized world.

The flicker of hope kindled by the 2019 protest movement was ruthlessly extinguished as decades-old newspapers and activist organizations were systematically dismantled by Beijing’s puppet government.

The massive 2019 protest movement was sparked by Hong Kong’s fear that a law making criminal extradition to China easier would damage the island’s autonomy, as laid out by the Basic Law established when the U.K. gave Hong Kong to China in 1997. 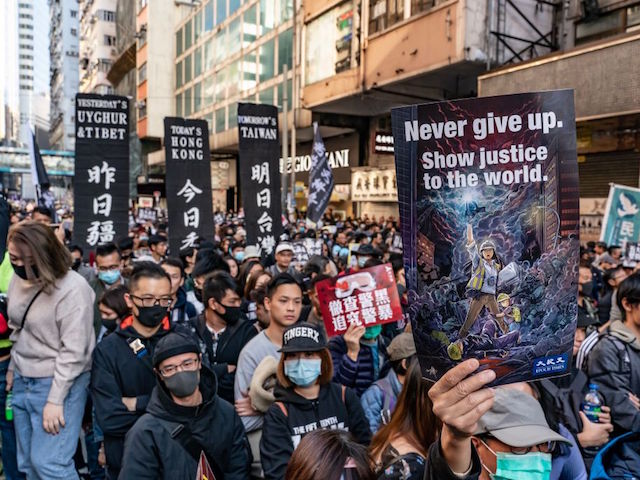 Pro-democracy protesters march on a street as they take part in a demonstration on December 8, 2019 in Hong Kong, China. (Photo by Anthony Kwan/Getty Images)

The guiding principle of the Basic Law was “one country, two systems” – Hong Kong would have its own legislature, and its people would have freedoms unknown to the subjects of the regime in Beijing.

At the height of the protest movement in 2019, pro-democracy activists dreamed of increasing their autonomy and loosening Beijing’s grip on the Hong Kong government. The fifth of their famous “Five Demands” was universal suffrage, which would have allowed the people to vote for all legislators and the chief executive, instead of only half the seats in the legislature or LegCo. 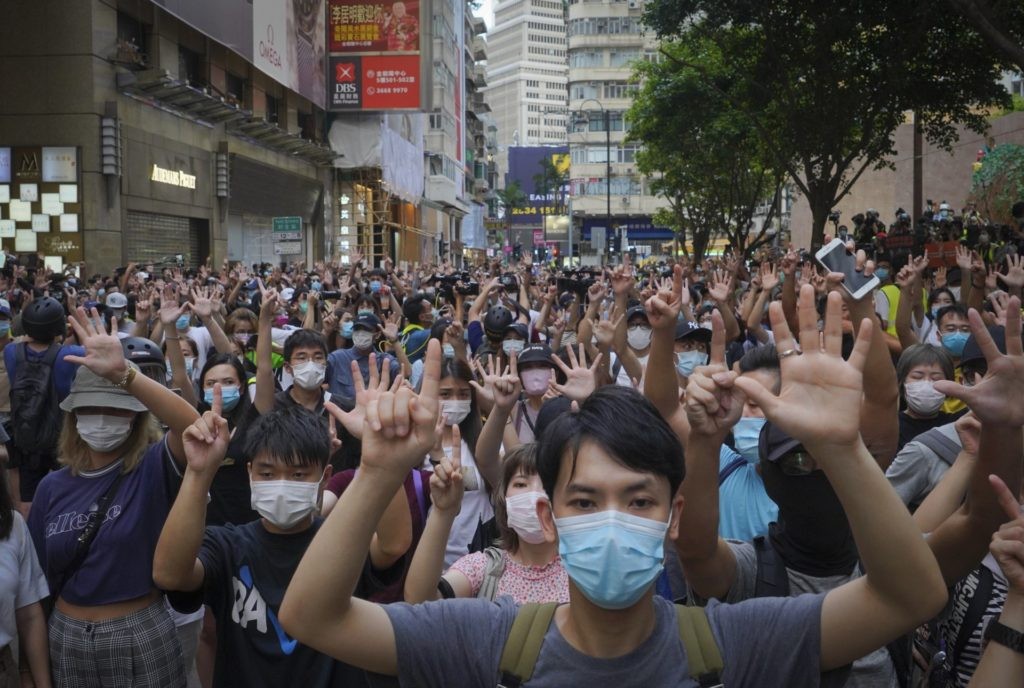 In this Wednesday, July. 1, 2020 file photo, protesters against the new national security law gesture with five fingers, signifying the “Five demands – not one less” on the anniversary of Hong Kong’s handover to China from Britain in Hong Kong. (AP Photo/Vincent Yu)

After failing to shut down the protest movement with police brutality, the puppet government in Hong Kong stepped aside and let Beijing impose a brutally totalitarian “national security law” on the island, bypassing its legislature and smashing the core tenet of Basic Law.

The law, which went into effect in June 2020, set the stage for 2021’s crackdown by criminalizing all opposition to the government as sedition and treason. Even the most reasonable criticism of human rights violations was suddenly deemed a threat to China’s national security. Critics of the regime were presumed to be “collaborating” with foreign powers and treated like enemy spies.

The national security law quickly strangled the protest movement, as demonstrators realized the gloves had come off and they would be punished as traitors and subversives for assembling in public. The law was viciously effective at shutting down student activist groups, the lifeblood of the protest movement. University administrations installed political officers and monitored the student body for any sign of dissent.

By the middle of 2021, hundreds of students had pulled out of Hong Kong universities as their parents made plans to flee overseas to escape the witch hunt. In September, the university system announced plans to forcibly “educate” students in the glories of the national security law at every level, from primary schools to college. This is tantamount to forcing the children of Hong Kong to listen to threats from the Chinese Communist Party for an hour a day during their entire academic careers.

The national security law was used as a cudgel to smash Hong Kong’s formerly vibrant pro-democracy media. Venerable anti-communist publication Apple Daily was forced to shut down in June. Incredibly heavy demand for its final issue was a final gesture of defiance from freedom-loving Hong Kongers, but the passing of Apple Daily also felt like a funeral for a friend. 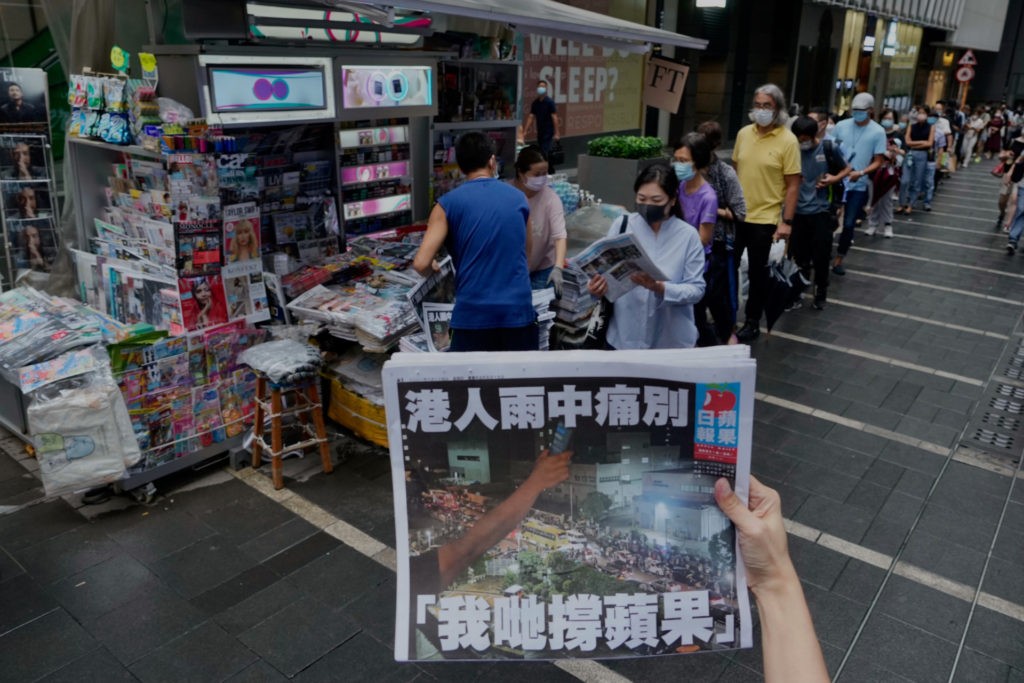 A woman tries to take a picture of last issue of Apple Daily in front of a newspaper booth where people queue up to buy the newspaper at a downtown street in Hong Kong, Thursday, June 24, 2021. ( AP Photo/Vincent Yu)

Apple Daily founder Jimmy Lai, 74, will probably spend the rest of his life in jail, along with some of his top executives. The government spent 2021 slapping them with one “sedition” charge after another, all the way through the last week in December. The Communists kept beating the corpse of Apple Daily until its parent company, Next Digital, was forced to liquidate. The message to other Hong Kongers who might dare to speak up for freedom and democracy was clear. 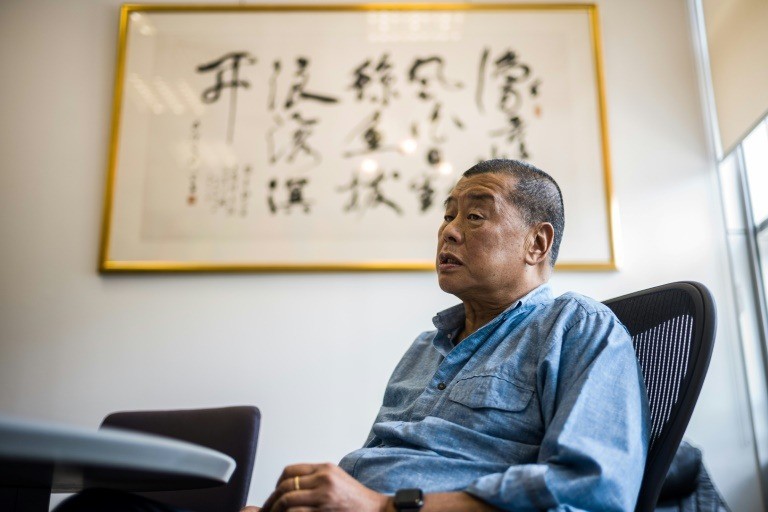 A similar playbook was followed in December to shut down Stand News, the last of Hong Kong’s major pro-democracy websites. One of the “charges” filed against Stand News under the national security law was that it committed an act of sedition by reporting on the abuse of protesters accused of sedition.

As with Next Digital, the Communist-controlled Hong Kong government stormed the offices of Stand News with hundreds of police officers and seized both its physical and financial assets, salting the earth and ensuring the site could never rise again.

The national security law was also used as a flamethrower to burn every trace of pro-democracy sentiment from the Hong Kong legislature.

The entire opposition quit LegCo en masse in November 2020, as new laws were passed enabling the puppet government to expel them without much in the way of due process. These outrages were justified on the grounds that pro-democracy legislators were committing treason and “sabotaging” the government by preventing legislation desired by Beijing from passing.

An obscene farce of an “election” was held in December 2021, with only loyal pro-Communist “patriots” permitted to run for office. Hongkongers stayed home in droves, protesting in the only way left to them. They should probably brace themselves for another mutation of the national security law that makes it illegal to refrain from voting in the next sham election. There are bills pending in LegCo that would force all Hongkongers to swear public vows of loyalty to Beijing.

The purge of pro-democracy voices from LegCo was accompanied by an assault on unions, culminating in the October breakup of the Hong Kong Confederation of Trade Unions (HKCTU), the city’s largest independent trade union. HKCTU was threatened with prosecution under the national security law because its ties to an international trade union supposedly made it a “foreign agent” that was colluding with “foreign forces.”

Hong Kong’s largest teachers’ union also disbanded in 2021 after the Chinese Communist Party labeled it subversive for colluding with student protesters in 2019. A few hours after a Communist Party newspaper in China called the 50-year-old Hong Kong Professional Teachers’ Union (HKPTU) a “poisonous tumor” that should be cut out of city life, the Hong Kong Education Bureau withdrew its accreditation.

The Chinese Communist Party rounded out its year of horrors in Hong Kong by eliminating every trace of remembrance for the 1989 Tiananmen Square massacre, an atrocity the regime in Beijing is trying to erase from history.

Chinese citizens have long been forbidden to commemorate or discuss the brutal slaughter of student demonstrators at Tiananmen Square, but in autonomous Hong Kong, huge candlelight vigils were held every year and striking artworks were created to ensure the memory of the fallen would endure.

The vigils were decisively crushed in 2021, first by using the Wuhan coronavirus pandemic as an excuse to cancel them in the name of public health, and then by using the national security law to persecute the organizers as subversives. The Tiananmen Massacre Museum was stormed by police in September.

In late December, government thugs working under cover of darkness tore down the Pillar of Shame, a 26-foot-tall statue of Tiananmen Square victims that has been on display in Hong Kong for over 20 years. Disregarding its Danish creator’s claim of ownership, the statue was unceremoniously tossed into a storage container at the University of Hong Kong.

Other Hong Kong universities quickly followed suit and purged their own Tiananmen Square sculptures. International observers mourned the fall of the Pillar of Shame as not only the memory-holing of the massacre but also the death knell for academic freedom in Hong Kong – a chilling warning to students that nowhere on the island was safe for thinking unauthorized thoughts.

The Chinese Communist Party paid little price for its scorched-earth campaign against freedom and autonomy in Hong Kong. The British government complained about China’s violations of the 1997 handover agreement, declaring in December that “the erosion of liberty in Hong Kong is an affront to freedom and democracy,” but few concrete steps were taken against the oppressive Chinese government.

“Just over a year since the introduction of the national security law, the mainland Chinese and Hong Kong authorities have used the law and related institutions against all opposition, free press and civil society in Hong Kong,” said British Foreign Secretary Liz Truss when rolling out the latest grim six-month report on the oppression of Hong Kong.

Chinese officials offhandedly dismissed the report as a hypocritical effort to “create trouble in Hong Kong” and “contain China.” This is the language used by the Chinese Communist Party to deflect every human rights complaint, all the way up to genocide.

As long as foreign money keeps flowing through Hong Kong, as long as Beijing still gets the prestige of hosting the Olympics, Communist oppression will continue. Words can be ignored, just as memories can be erased and statues can be torn down.