Protesters from New York’s Tibetan, Hongkonger, Southern Mongolian, and Kazakh communities and their allies rallied outside of Rockefeller Center on Tuesday demanding that NBC drop its coverage of the 2022 Beijing Winter Olympics.

Tuesday marked one month until the start of the Winter Games in the Chinese capital. Dozens of organizations representing the victims of Chinese communism around the world organized a “global day of action” to demand a boycott of the event. Among the demands the groups have listed are for the International Olympic Committee (IOC) to relocate the event, for NBC to drop its coverage, for sponsors to not fund it, and for athletes not to participate.

Human rights groups have objected for years to Beijing hosting the event on the grounds that China is one of the world’s worst human rights abusers. China is currently engaging in what both the administrations of President Joe Biden and Donald Trump have deemed a genocide against the Uyghur ethnic people of East Turkistan, as well as other Muslim-majority ethnic groups in the area. The Communist Party is believed to operate as many as 1,200 concentration camps there, where victims are subject to slavery, torture, forced sterilization, and other crimes.

The Party has long implemented similar measures in Tibet, where an estimated 500,000 people have been forced into concentration camps since 2020. Chinese officials have outlawed Tibetan Buddhism and removed Tibetan language instruction from classrooms, implementing teaching of Mandarin, a Han language that has no roots in the region. Tibetans have similarly accused Chinese officials of torturing and enslaving them.

In Hong Kong, China illegally ended the once-capitalist city’s autonomy by passing a law in 2020 that essentially outlawed dissent by criminalizing “subversion of state power” as a “national security” crime subject to a minimum of ten years in prison. China’s puppet government in Hong Kong has arrested or exiled nearly every prominent participant in the 2019 pro-democracy protests and implemented communist indoctrination in schools.

“We are demanding the International [Olympic] Committee relocate the venue at any cost, as the chosen venue is undeserving,” Ngawang Tashi, the vice president of the U.S. Tibet Committee, told Breitbart News in an email on Tuesday. U.S. Tibet Committee was among the several organizations participating in the protests in New York that day, which began at the Chinese Consulate and ended under NBC Studios. 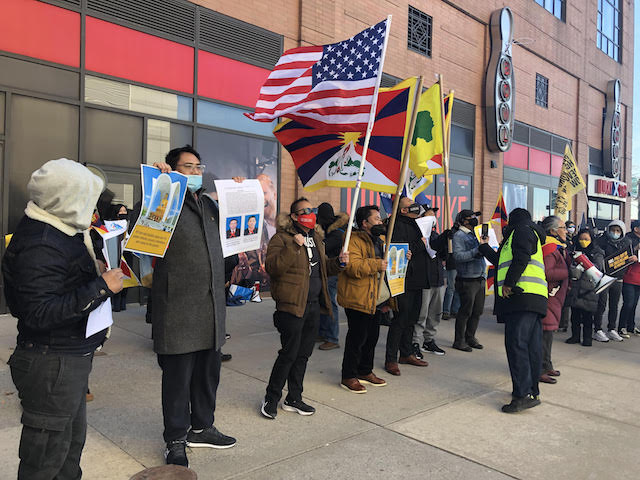 NBC Universal paid nearly $8 billion in 2014 to secure the rights of every Olympic Games ceremony through 2032. Beijing won the bid to host the Games for a second time a year later, meaning NBC had no way of knowing the Games would return to China when it signed its broadcast deal. The corporate media giant has nonetheless not shown any signs of recalibrating its decision in light of the event going to China and has not responded to protests. 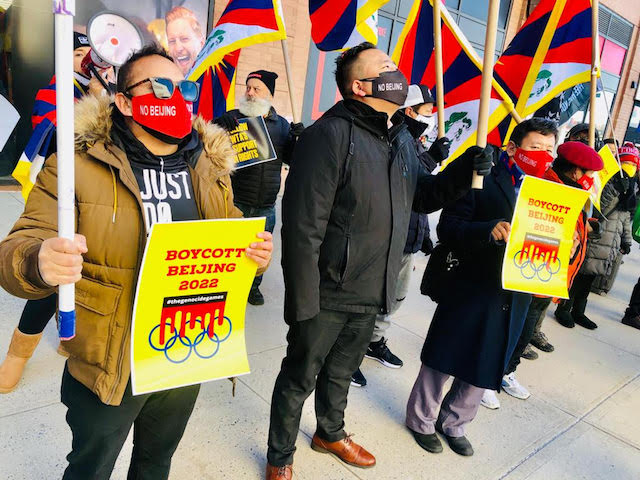 Among the organizations participating in the protest in New York on Tuesday were the U.S. Tibet Committee, Students for a Free Tibet, NY4HK, Support the Democracy Movement in Burma, the Southern Mongolian Human Rights Information Center, and several Taiwanese and Uyghur groups. 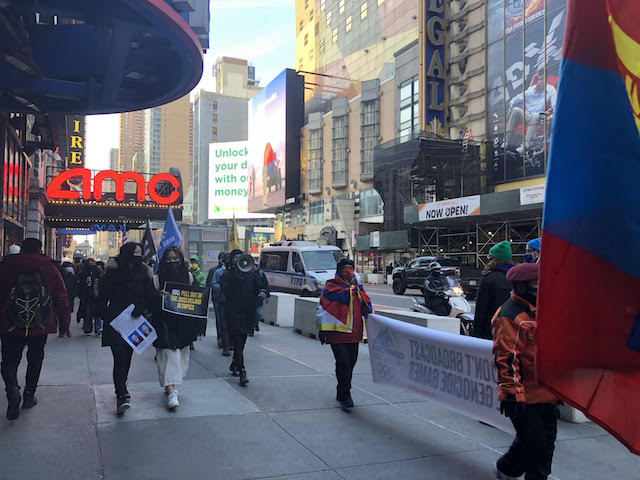 The Chinese Communist Party, Tashi observed, “has a history over 100 years of genocide” and authoritarian repression of its people, “and such a government [does] not deserve to host international games like the Olympic Games.”

In lieu of the IOC relocating the event, Tashi stated that the protesters would “demand the people of the world and leaders of the world to boycott this Winter Olympics in Beijing. We will continue to fight for our rights and will boycott the 2022 Olympic Games.”

Of NBC and the Olympic sponsors specifically, Tashi said protesters asked “NBC to stop broadcasting and sponsor[s to stop] dealing with” the 2022 Olympics. 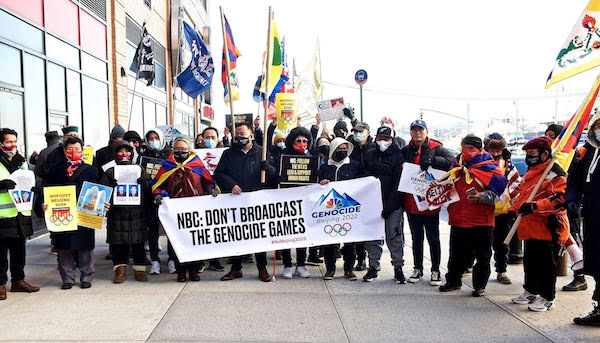 Tashi estimated that the protesters were about 60 people in New York and noted that the president of the Tibetan Youth Congress and a Hong Kong youth leader addressed the crowd at the Chinese consulate. He offered thanks to countries “who denied sending their diplomats to China, showing a symbol of truth and justice.”

While no government has committed to boycotting the Olympic Games, several nations have claimed to not be sending politicians to the Opening Ceremonies and other key events in protest of China’s human rights abuses, among them Biden administration.

Tashi confirmed that neither the IOC nor NBC have contacted the organizations behind the protests.

Similar protests occurred in Boston and Washington, DC, on Tuesday.

I’m gathering today with fellow Hong Kongers as well as Tibetan and Uyghur activists outside @NBCUniversal’s news studios in Washington to protest its broadcasting of the upcoming Beijing Winter Olympics. This is part of our Global Day of Action one month ahead of the games. pic.twitter.com/rIUo3joXIi

Protesters also organized against the Olympics in Australia and Germany.

Global Day of Action – Brisbane 🇺
Yesterday marks the one-month countdown until @beijing2022.#HongKong, #Tibet, #Uyghur groups have gathered in Brisbane to call for a total boycott of the @Beijing2022 Winter Olympics!#NoBeijing2022#BoycottBeijing2022#FreeHongKong pic.twitter.com/24rAKES76j

NBC’s Olympics woes did not begin with China. This summer, the 2020 Tokyo Summer Olympics — delayed a year because of the Chinese coronavirus pandemic — attracted such low ratings in America that NBC began offering extra commercials to its sponsors.

“NBC’s primetime coverage of the Tokyo Olympics on July 26 averaged 14.7 million viewers — for a 49% drop compared to the equivalent night from the 2016 Rio de Janeiro Games and 53% less than the 2012 London Olympics,” Fox News reported last year. “The opening ceremonies saw their lowest viewership since 1988.”