Critics describe BRI as a form of colonialism, a “debt trap” set by imperialist China for poor countries, and Sri Lanka often serves as Exhibit A for the prosecution.

“The president pointed out that it would be a great relief to the country if attention could be paid on restructuring the debt repayments as a solution to the economic crisis that has arisen in the face of the Covid-19 [Chinese coronavirus] pandemic,” Rajapaksa’s office said after his meeting with Wang.

Rajapaksa also asked Wang for unspecified concessions on China’s $3.5 billion in annual exports to Sri Lanka. No details of this request were provided by Rajapaksa’s office, but Sri Lanka’s exports to China dropped precipitously over the past two years, producing an enormous trade imbalance.

The BBC pointed to the loss of revenue from tourism as a factor in Sri Lanka’s debt crisis, which is raising fears of national default, although the central bank assured investors that plans have been made to make bond payments for at least another month. 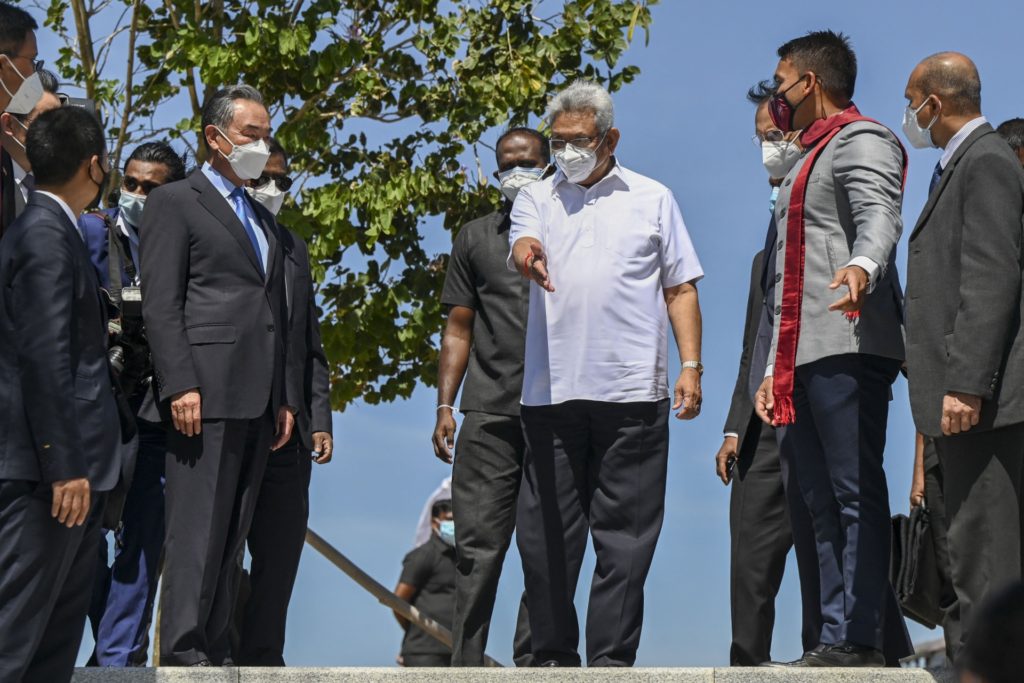 Sri Lanka President Gotabaya Rajapaksa (center R) gestures next to Chinese Foreign minister Wang Yi (3L) as they arrive at a sailing event on the occasion of the 65th anniversary of diplomatic relations between the Sri Lanka and China at during his visit to Colombo Port city project, in Colombo on January 9, 2022. (ISHARA S. KODIKARA/AFP via Getty Images)

Sri Lanka has been under a declared state of “economic emergency” since September. On Friday, its main energy utility began rationing electricity because it no longer has enough foreign currency to purchase fuel. 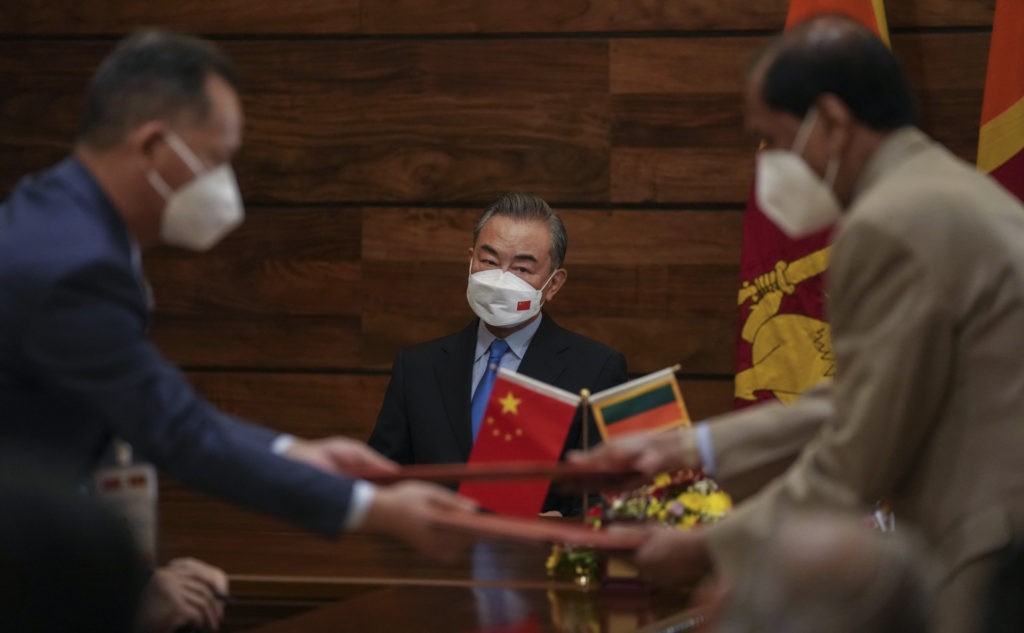 Sri Lanka’s government turned to some unusual solutions for debt repayment in the absence of hard currency, such as convincing Iran to accept $5 million a month in tea as repayment for a $251 million oil debt. The central bank pumped up its foreign exchange reserves in December by swapping an estimated $1.5 billion of its currency with China.

Critics of BRI say Sri Lanka used its huge loans from China to finance “unnecessary schemes with low returns,” as the BBC put it. Some of Sri Lanka’s biggest BRI projects, including major air and sea port renovations, appear more useful to China and other foreign interests than Sri Lankans, and the projects required ceding a troubling amount of Sri Lankan real estate to Chinese control.

Sri Lanka made headlines in early 2021 when China was effectively given control of the Hambantota port under pressure from Belt and Road debts, but current criticism revolves around numerous smaller BRI projects that do not generate nearly enough revenue to cover the loans taken out to build them.

Even BRI defenders admit some of those projects look like risky gambles that did not pay off, as in the case of Fudan University professor Lin Minwang’s comments to the South China Morning Post on Monday. Lin suggested Sri Lanka needed to step up and take responsibility for these boondoggles, “rather than universally blaming the Chinese side.”

“It can only be said that some projects are indeed facing difficulties, but it is hard to say if it has anything to do with debt,” said Lin.

The Chinese Foreign Ministry was evasive when asked for details of Sri Lanka’s debt restructuring request on Monday. Spokesman Wang Wenbin rhapsodized at length about the great relationship between China and Sri Lanka, ticking off their common regional interests, before insisting it is “untrue to say that joint Chinese investments are expensive and not profitable.”

“China-Sri Lanka cooperation is mutually beneficial and has been warmly welcomed by all sectors in Sri Lanka,” Wang insisted.

Wang deflected repeated questions about Sri Lanka’s debt by insisting Beijing is “providing assistance” to the “best of its capacity,” and remains confident Sri Lanka will overcome its “temporary difficulties.”

Chinese Foreign Minister Wang Yi growled on Sunday that “third parties” should not interfere in matters between China and Sri Lanka.