The Philippine federal government this week ordered local governments across Metro Manila to begin enforcing a public transportation ban on all people not vaccinated against the Chinese coronavirus, meaning anyone who cannot provide proof of coronavirus vaccination may not board buses, trains, boats, or planes in the Philippine national capital region, Agence France-Presse (AFP) reported Thursday.

The Philippine Department of Transportation [DOTr] instructed all mayors across Metro Manila — which contains 17 cities, including Manila — to start enforcing the “no vaccination, no ride/no entry” policy in a federal edict issued on January 11.

“All concerned attached agencies and sectoral offices of DOTr are directed to ensure that operators of public transportation shall allow access or issue tickets only to ‘fully vaccinated persons,'” the statement read.

The transportation department advised Metro Manila transit staff to identify a “fully vaccinated” person by his or her “physical or digital copies of an LGU (local government unit)-issued vaccine card, or any IATF-prescribed document, with a valid government issued ID with picture and address.”

“IATF” is the initialism used for the Philippines’ Inter-Agency Task Force for the Management of Emerging Infectious Diseases.

Unvaccinated people are forbidden from using public transport across Metro Manila as long as the region remains under a “COVID-19 Alert Level 3 level or higher,” the Philippine Department of Transportation stipulated on January 11. Metro Manila’s pandemic task force placed the national capital region — home to nearly 13 million residents — under a “level 3” alert for the Chinese coronavirus on January 3, with the status expected to remain in place through at least January 15. The Philippines’ IATF will determine when and if Metro Manila’s coronavirus alert level changes in the near future, the nation’s transportation department said Tuesday.

“[I]t’s high time to police those who are unvaccinated and to regulate their movements,” Manila City Mayor Isko Moreno Domagoso told reporters on January 12 when asked about the new public transport ban for the unvaccinated. Mayor Isko Moreno, who is running for the Philippine presidency in an upcoming general election in May, made the remark while attending the opening of a Chinese coronavirus vaccination site in Manila city.

A council of Metro Manila mayors passed a resolution on January 3 “urging the passage of local ordinances prohibiting unvaccinated individuals from going outside their residences, except for essential trips,” the Philippine Inquirer reported on January 4.

The resolution encouraged council members to “bar the unvaccinated from indoor and outdoor dining at restaurants and other food establishments, and from leisure or social trips to malls, hotels, sports, and other similar facilities.”

The mandate, which has since come into effect, additionally prohibits unvaccinated Metro Manila residents from “domestic travel via public land, sea and air transportation, except to buy essential goods and services such as food and water, for work or medical and health reasons,” according to the Inquirer‘s January 4 report. 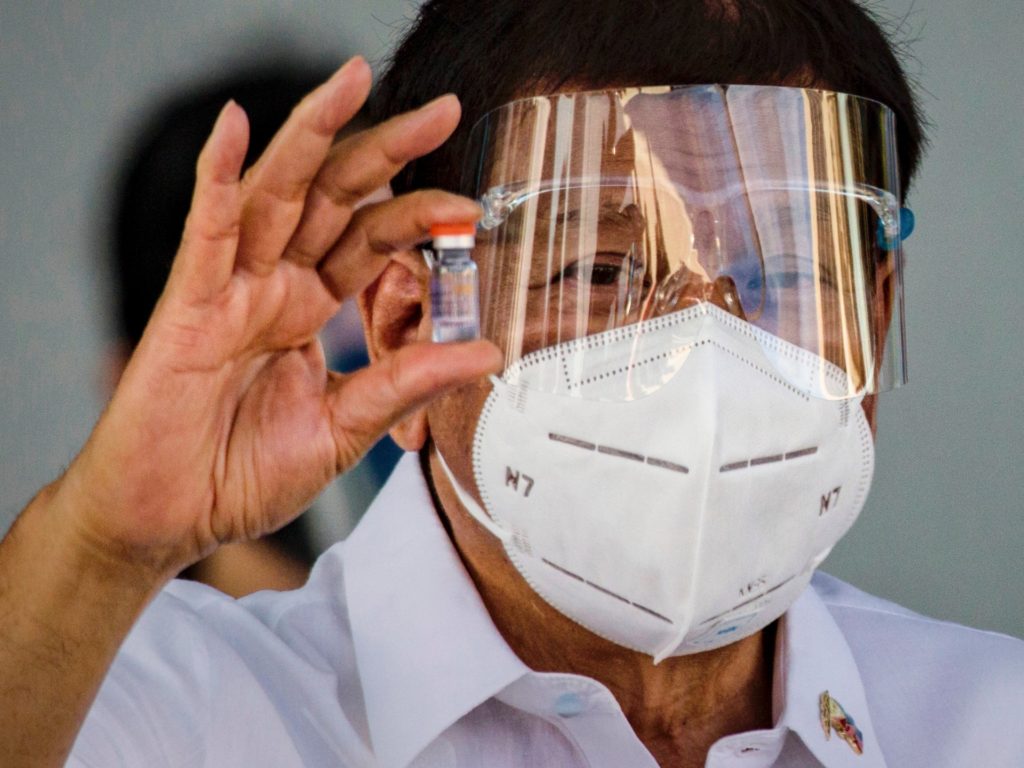 Philippine President Rodrigo Duterte holds up a vial of Sinovac Biotech’s COVID-19 vaccines as he witnesses the arrival of a shipment of the vaccines at Ninoy Aquino International Airport on February 28, 2021, in Manila, Philippines. (Photo by Ezra Acayan/Getty Images)

“Duterte in an televised address to the nation said he was asking community leaders to look for unvaccinated people and make sure they were confined to their homes,” Channel News Asia (CNA) reported.

“If he refuses, if he goes out his house and goes around the community, he can be restrained. If he refuses, the [police] captain is empowered now to arrest recalcitrant persons,” Duterte warned.