“Figures released by the United Nations’ refugee agency UNHCR showed that while around 12,000 Chinese nationals sought asylum overseas in 2012, the year that Xi took office as CCP general secretary, that number had rising to nearly 120,000 by 2021 [sic],” RFA reported on June 21.

“In total, around 730,000 Chinese nationals have sought asylum since 2012, with more than 170,000 living outside China under refugee status,” RFA reported citing the U.N. report. 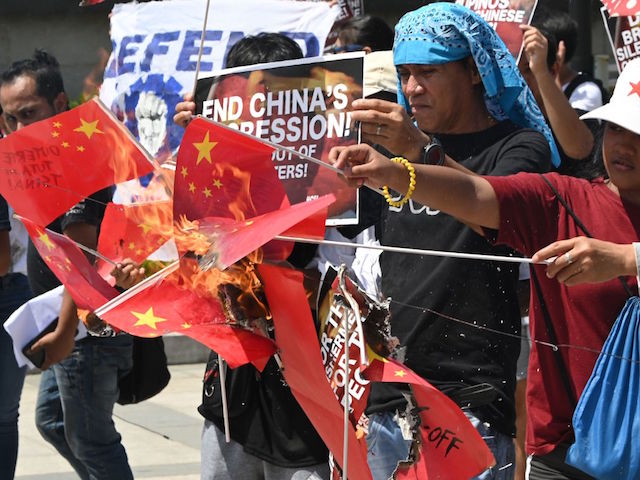 Activists burn Chinese flags and display anti-China placards during a protest at a park in Manila on June 18, 2019. (Photo credit should read TED ALJIBE/AFP/Getty Images)

The U.N. Refugee Agency’s own data set for Chinese asylum seekers appeared to show slightly different figures than those estimated by RFA on Tuesday, though the statistics did demonstrate a steady increase in asylum applications by Chinese nationals each year from 2012 to 2021.

Amnesty International defines an “asylum seeker” as a person who has left his or her native country and is “seeking protection from persecution and serious human rights violations in another country, but who hasn’t yet been legally recognized as a refugee and is waiting to receive a decision on their asylum claim.”

“[S]eeking asylum is for many a desperate act, reserved for those with few other options, which does not apply to the great many Chinese who have moved, and continue to do so, to the U.S, Australia, and beyond, often via naturalization, work visas or property purchases,” according to the China-focused human rights group Safeguard Defenders.

“The United States remains by far the most popular choice, with 88,722 persons seeking asylum there. The only other place that has been consistently popular is Australia, which saw 15,774 asylum-seekers last year,” the organization reported on June 16.