The Global Times, a Chinese government newspaper, demanded in an editorial Thursday that the United States fund the Taliban jihadist organization by unfreezing Afghan government funds after a 5.9-magnitude earthquake killed over 1,000 people in the country this week.

The earthquake most severely affected Afghanistan’s eastern Khost and Paktika provinces, largely leveling entire communities of shoddy construction on the impoverished Afghan-Pakistani border. Taliban leaders have requested support from the international community to address the disaster, thanking the governments of India, China, and Iran in particular for stepping in.

As of Wednesday, American officials stated that the Taliban had not officially requested aid through the United Nations to help those affected.

Taliban spokesman Zabihullah Mujahid has taken the lead in requesting international assistance and posting footage of the arrival of alleged humanitarian aid on social media.

China recognized the Taliban as the “interim government” of Afghanistan in October but has not formally accepted the jihadist organization as a full government. No state on the planet has recognized the Taliban, though the United Nations has allowed for interactions, including the delivery of humanitarian aid, involving Taliban officials since the terrorists took over the country in August 2021.

The state-run Global Times‘ editorial condemned the United States — which fought a 20-year war against the Taliban that ended abruptly with President Joe Biden extending, then withdrawing troops from, the war — for freezing Afghan government assets to prevent the Taliban from accessing them following its seizure of Kabul.

“After realizing that its geopolitical goals can hardly be reached, the US hastily and irresponsibly withdrew its troops from Afghanistan, leaving a big mess behind to the Afghan people,” the newspaper’s editorial staff denounced. “Not only that, the US also imposed unilateral sanctions against Afghanistan, shut the door upon a large number of Afghan refugees, and even robbed Afghanistan of its money.” 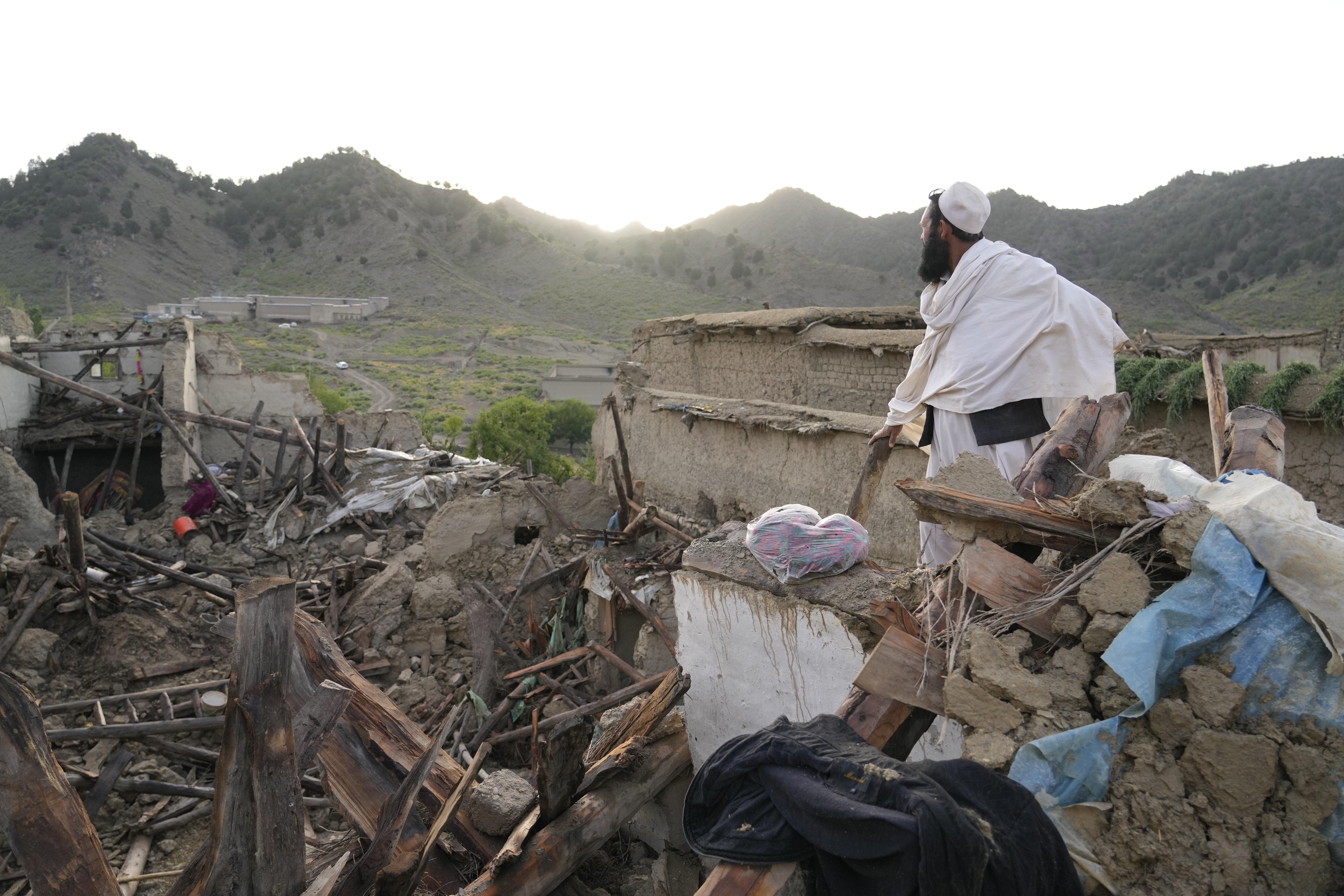 A man stands among destruction after an earthquake in Gayan village, in Paktika province, Afghanistan, Thursday, June 23, 2022. (AP Photo/Ebrahim Nooroozi)

The Times repeatedly condemned the Biden administration for expressing concern for the victims of this week’s earthquake, calling the remarks “crocodile tears” and “hypocritical, ironic and even cruel.”

“What makes people even more outraged is that Washington still freezes a huge sum of $7 billion in assets in the US belonging to Afghanistan’s central bank,” the newspaper asserted, without specifying which “people” were outraged. 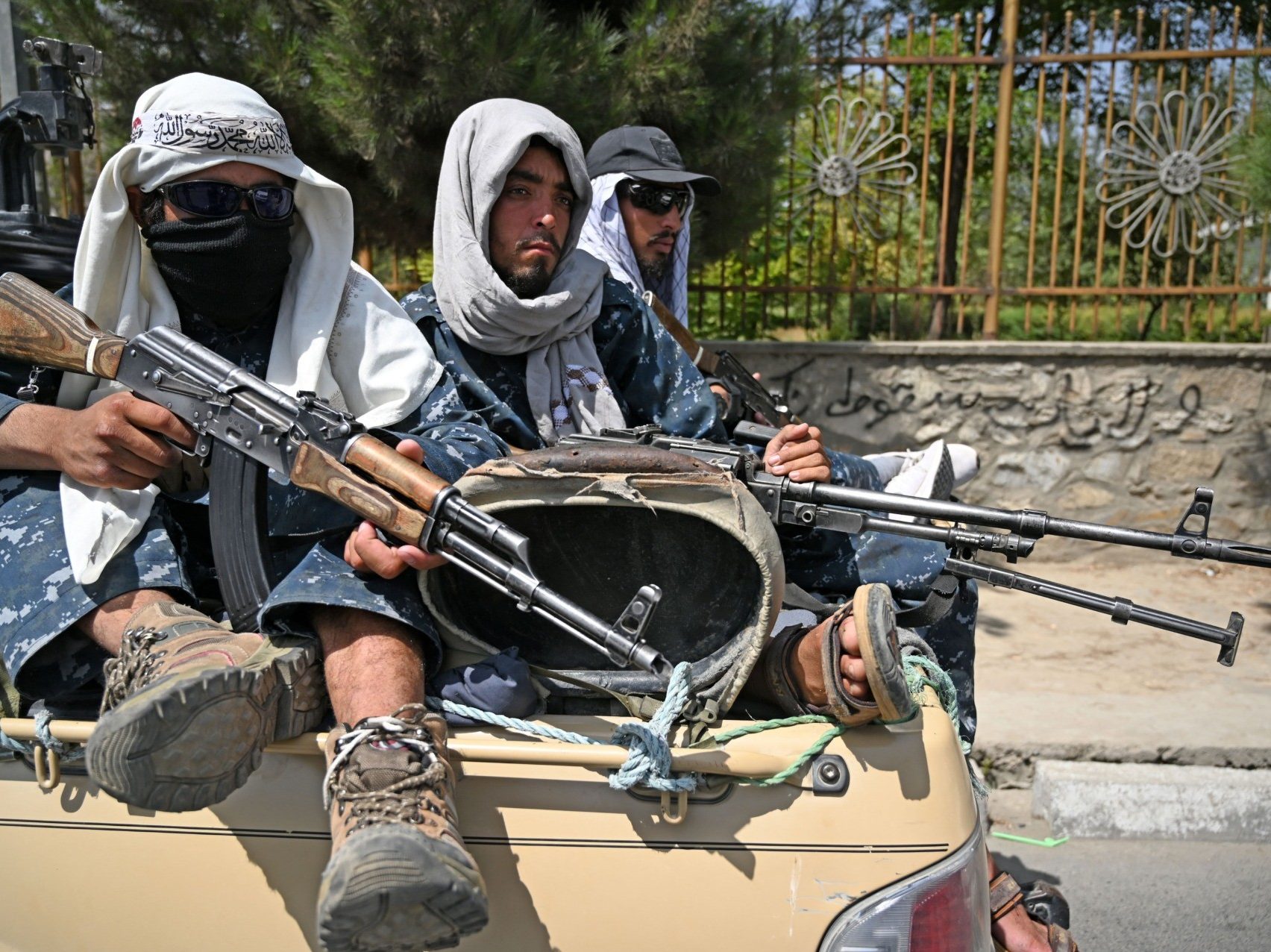 “The US is using sulfuric acid as Band-Aid for Afghanistan,” the editorial quipped.

The Chinese government publication quoted a statement from National Security Adviser Jake Sullivan disparagingly, attacking him for stating that America was “deeply saddened” while seemingly doing nothing to help those affected. It notedly omitted the parts of the statement that specified what America was doing to offer material help to Afghanistan. 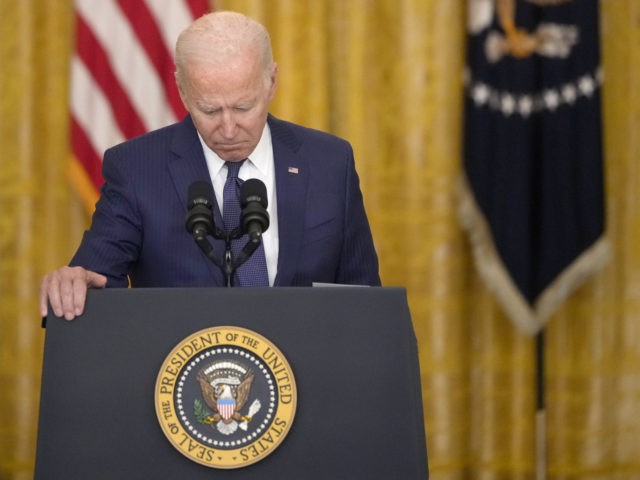 U.S. President Joe Biden speaks about the situation in Kabul, Afghanistan from the East Room of the White House on August 26, 2021 in Washington, DC. (Drew Angerer/Getty Images)

“President Biden is monitoring developments and has directed USAID and other federal government partners to assess U.S. response options to help those most affected,” Sullivan said in the part of his statement the Global Times did not publish. “The United States is proud to be the single largest donor of humanitarian aid to Afghanistan, and our humanitarian partners are already delivering medical care and shelter supplies on the ground. We are committed to continuing our support for the needs of the Afghan people as we stand with them during and in the aftermath of this terrible tragedy.”

“Rich countries – represented by the US – which often talk about ‘human rights’ are extremely stingy and hypocritical in the face of the humanitarian disaster they had created in Afghanistan,” it continued. “They uttered a few beautiful words and shed a few drops of crocodile tears, but they are apathetic and indifferent and have no sincerity at all.”

In reality, the United States is far from the only entity that froze Afghan government assets last year in response to the Taliban takeover, fearing the money would end up in the hands of terrorists and misused to abuse the Afghan people. The International Monetary Fund (IMF) and the World Bank cut the Taiban off from state funds shortly after its return to power.

“We are deeply concerned about the situation in Afghanistan and the impact on the country’s development prospects, especially for women,” said World Bank spokeswoman Marcela Sanchez-Bender at the time. “We have paused disbursements in our operations in Afghanistan and we are closely monitoring and assessing the situation in line with our internal policies and procedure.”

American officials have not ruled out aiding in Afghanistan earthquake relief. U.S. Deputy Special Representative to Afghanistan Ramiz Alakbarov said Wednesday that the government appeared to be waiting for Taliban leaders to reach out. Taliban leaders, he said, had not “formally requested that the U.N. mobilize international search-and-rescue teams or obtain equipment from neighboring countries to supplement the few dozen ambulances and several helicopters sent in by Afghan authorities.”

The Chinese government has repeatedly demanded that the American government not only recognize and not sanction the Taliban, but fund its success. It has yet to fully accept the Taliban as the government of Afghanistan, however. In April, Chinese Foreign Minister Wang Yi praised the Taliban for its performance at the helm of the country and appeared to accept the jihadist group as an “interim” government, without specifying what had to happen in that interim for a fully accepted government to take hold.

On Thursday, the Chinese government revealed through the Global Times that a Taliban ambassador to Beijing has been stationed in the Chinese capital for an unspecified period of time.

Zhu Yongbiao, executive director of Research Center for the Belt and Road … [said] that at a time when the Afghan Taliban government is plagued by a lack of international recognition,” the state outlet revealed, “China is gradually making public the fact that the Taliban government’s Charge d’affaires is already working in China.”

“Due to the urgency of earthquake relief, it is necessary to further expand assistance to Afghanistan,” Zhu was quoted as saying, “The Chinese government has no way to bypass the Taliban, and their cooperation and support are needed in reality, so that relief assistance can be more efficient and the Afghan people can receive assistance more quickly.”