SONOITA, Arizona–An American border rancher had no idea that his decision to save a pair of wounded horses roaming the desert would one day save his own life–actually on two separate occasions. The rancher, Bevan Olyphant, came across the horses ten year ago while visiting a neighboring ranch after they had been cut loose by Mexican narcotics smugglers.

“Jackson has saved my life several times. He can smell smugglers,” said Olyphant of one of the rescued animals. He said there have been two occasions where he would have unwittingly stumbled upon Mexican narcotics smugglers carrying AK-47’s on his ranch had it not been for the rescued horse. Olyphant said that spending several days in the desert makes one smell bad and that smell causes the horse to remember the people who so badly abused him. “He tenses up and starts snorting, he let’s me know when they are nearby,” he said.

“I didn’t need to throw a rope onto Jackson,” said Olyphant. “He weighed about 400 pounds less and he was lame.” 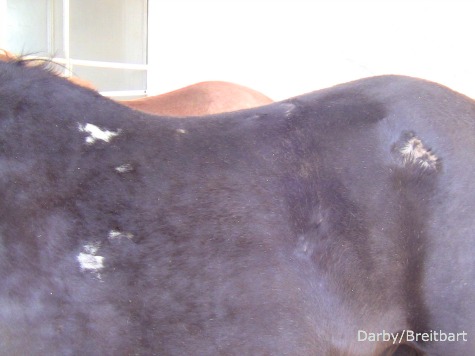 Jackson, and another horse named “Juggy,” had both been born in Mexico and raised to carry large dope loads for Mexican smugglers. Large scars on the animals backs and hips show the wear from wooden pallets having once been strapped directly onto the animals without any padding. Both animals have deep branding scars on their faces–just under their left eyes–from where their former owners had burned their marks.

“The State of Arizona said he’s a Mexican horse, but the state owns him [Jackson] because he came into the country illegally,” said Olyphant. He said the state had to put the animals up for auction. Olyphant told the auctioneers he would pay double the highest bid. “I did my homework and they wanted horse meat,” he said. “I knew what the price of horse meat was.”

Jackson is an estimated 20-years-old, with Juggy being older. Olyphant’s vast southern Arizona ranch sits 10 to 20 miles from Mexico. The notorious Sinaloa cartel controls the region in Mexico just south of the border and Olyphant often finds his ranch being used as a route for the cartel’s activities.

Though Juggy is now out to pasture, Jackson still helps the rancher round up cattle. Olyphant said he feels much safer when he is with Jackson.

Breitbart News provides video from a portion of the interview with the rancher below. The other horse in the video is named “Smoke.”