The nonprofit generally targets Republicans and is regularly cited by pundits and news outlets. More recently, the group engaged in what could best be called a smear campaign against John Lott, an economist, firearms researcher, and Founder of the Crime Prevention Research Center. For more than a decade, Lott has developed a unique public profile as an expert on guns and society, who combines advocacy with substantial data and academic rigor.

Media Matters has devoted 87 posts to attacking Lott during a seven year span, with the objective of discrediting him personally and countering the guns rights movement. Making this situation interesting is that Media Matters, in its campaign against Lott, has apparently crossed the boundary from reporting misinformation to systematically generating it.

In seven years of writing about Lott and referring to his work, the organization prevented Lott from speaking out on his own behalf on the site, despite his consistent endeavors to do so. When Lott tried to leave comments on Media Matters articles, a site administrator deleted them. Other comments never got posted at all.

In one instance the site even deleted comments from Lott, in which he explained to Media Matters readers why his eyebrows are disfigured due to surgery he had when he was young. 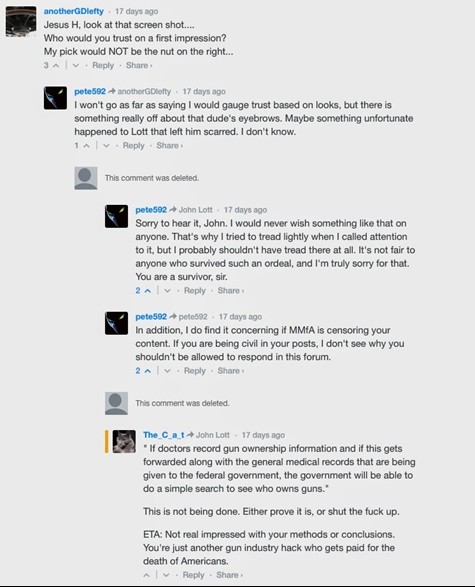 ​Media Matters did not correct the commenting issue after Lott made repeated attempts to personally reach out to the group’s staff members.

It was clear, however, that Media Matters was aware of the problem; the articles attacking Lott were often altered or edited after the researcher attempted to leave comments defending himself.

Lott wrote rebuttals on his own website. “Media Matters will not let me put up responses on their website and they won’t acknowledge that I have ever responded to their attacks because then they might have to respond to the substance of why their claims are wrong,” Lott wrote in one post, in response to a 2012 Media Matters article focused on the “discredited” researcher titled, “Who Is Gun Advocate John Lott?”

When contacted by Breitbart News for comment, Lott expressed frustration. “Media Matters is an organization that puts themselves out there as trying to get the truth out to people — but for seven years they would keep my posts off their website and would never acknowledge my responses,” he said. “It’s like they wanted to make sure that nobody knew there was a legitimate response to what they were putting out there.”

While many of Media Matters’ pieces scrutinize Lott’s professional work, the site also appeared to take personal jabs at him. At one point the site was using a doctored photo of him, in which the color of his hair and skin was edited to distort his appearance in an unflattering way.

Even the Washington Post picked up on the problem in April. The Post’s Erik Wemple contacted Media Matters to ask about the deletion of Lott’s comments on their articles. Although a technical issue was blamed for the issue, this explanation made little sense — the Media Matters commenting system required a site moderator to approve all comments before posting them.

Soon after the conversation with Wemple, however, Media Matters promptly acted by putting back up some of the comments that they had taken down.

It is unclear why Media Matters took action after speaking with Wemple — but had previously not done so despite Lott’s repeatedly reaching out to the group.

Given Media Matters’ willingness to block credible rebuttals from appearing on its site — effectively counteracting the organization’s supposed mission — it may come as a surprise that many large media outlets rely heavily on the group for information and statistics. The Huffington Post, Salon, and Politico have all cited the group’s research in news articles.

In the face of Media Matters’ politically-motivated campaigns, like the one launched against Lott, it is easy to question why a reputable news outlet would choose to be associated with the group or its findings.

Breitbart News made multiple attempts to reach Media Matters via email for a comment; those emails were not returned.