DONNA, Texas — In a city that has become a model of border-area corruption, Breitbart Texas has discovered that the legal counsel for the school board in Donna, Texas is apparently a convicted felon who spent time in federal prison on money laundering charges tied to drug trafficking and lost his license to practice law for several years.

The revelation comes just as newly elected Donna School board members, led by Alberto Sandoval, are preparing to oust Jesus Reyna, the current superintendent, over an alleged sex scandal involving his son-in-law. What is actually happening, as reported by Breitbart Texas, appears to be more of a political witch-hunt, with questionable evidence and a clear motive to force Reyna from office.

Robert J. Salinas, the attorney for the Donna Independent School District (Donna ISD), was hired soon after Sandoval and his group took office. What has not been publicly discussed is that Salinas pleaded guilty in 1994 to federal charges in connection with laundering money for a drug trafficking client, as revealed by court records obtained by Breitbart Texas. Salinas was then sentenced to 36 months in federal prison, and in 1995 filed a letter of resignation from the Texas Bar Association rather than face disciplinary action and having his license stripped.

After completing his prison term and his probation period, Salinas then asked to have his Bar license reinstated. Before 2012, the Texas Bar allowed attorneys to regain their license if they could prove that they had regained good moral character after completing their sentence; that regulation has since changed.

In 2005, Salinas applied to the Texas courts to have his license to practice law reinstated and was successful.

As previously reported by Breitbart Texas, Donna is the same city that made headlines during the 2012 Democratic primaries when campaign workers for the school board and county commissioners election were caught buying votes with cocaine, beer, and cigarettes. 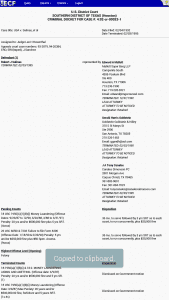