Five women have reportedly required emergency medical care after being injured during abortion procedures at a Planned Parenthood clinic in Houston within the past thirty days.

According to a report by Life News on Tuesday, the incidents happened at the Planned Parenthood Center for Choice, located at 4600 Gulf Freeway, and pro-life sidewalk counselors observed the women being transported by ambulance to nearby hospitals. Life News described four of the incidents, and the most recent one happened just days ago and was documented on a pro-life group’s Facebook page.

The first two emergencies took place on January 31, and February 6, 2015, according to Life News, when sidewalk counselors from Houston Coalition for Life observed ambulances leaving the Planned Parenthood clinic.

Operation Rescue covered the second incident in more detail, posting a report on their website describing how an ambulance was “seen headed in the direction of Ben Taub Hospital,” where other women injured by abortions at this same Planned Parenthood facility were also sent, and then it “turned off lights and sirens when leaving the Planned Parenthood abortion facility on Gulf Coast and only reactivated them after turning the corner onto another street.”

The next two incidents occurred on February 25 and 26, 2015, and again, sidewalk counselors observed women transported by ambulance from the abortion clinic. Houston Coalition for Life took photographs of the ambulances and posted them on their Facebook page.

“This afternoon another Ambulance was seen transporting someone from the Planned Parenthood on I45. That makes 4 in less than 30 days!” said one post dated February 26. “If you saw a ‘clinic’ with an ambulance leaving on average once a week, would you want to trust their medical practices?” 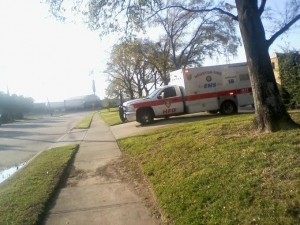 Then, on February 28, Houston Coalition for Life added a new post to their Facebook page, describing a fifth woman taken by ambulance to the hospital: “Another Ambulance carried a person out from Planned Parenthood today (February 28th) This is the 3rd one seen this calendar week and the 5th in 30 Days. We will be posting picture and more updates Monday. Please pray that anyone who is unfortunate enough to enter that place of horror also exits without being harmed – unborn baby included.”

These five women are only a small fraction of those who require emergency medical care from botched abortions. As many as a thousand women are hospitalized in Texas every year due to complications suffered during abortions, according to court records reviewed by Operation Rescue.

The 2013 Texas abortion law that made headlines when it was filibustered by former State Senator Wendy Davis, HB 2, mandated that abortion clinics meet the same requirements as ambulatory surgical centers, and doctors who perform abortions must have admitting privileges at a nearby hospital. Planned Parenthood is challenging this law in court.

The condition of the women observed being rushed to the hospital is unknown, as is whether the abortions were completed. Operation Rescue has requested the 911 records for this Planned Parenthood facility, which is among the very little publicly available information.

“Even though this Planned Parenthood abortion clinic is licensed as an Ambulatory Surgical Center, it is evident that safety problems still exist there,” said Operation Rescue President Troy Newman. “It is imperative that the Texas Department of Health take seriously complaints about this facility and act to shut it down…It is obvious that Texas has a long way to go to fully protect women from shoddy abortion practices.”

Life News also reported that Operation Rescue “has documented at least five other medical emergencies” at this same Planned Parenthood clinic, noting that these are only what pro life activists were able to observe, and many others could have happened without their knowledge.