Three groups with seemingly divergent viewpoints came together in Dallas to peacefully express their views about the situation in Baltimore. Peaceful, respectful, but a smaller than expected turn-out was how the #DallasToBaltimore demonstration went in Dallas on Friday night, May 1. The groups gathered to show solidarity with Baltimore, a city torched by the incendiary behavior of its residents in the wake of the tragic death of 25-year-old Freddie Gray.

However in the Big D, three groups pooled their protesting resources together. An anti-police protest was led by Mothers Against Police Brutality (MAPB). Backing the Blue rallied on behalf of the police. Both groups congregated on the steps of the Frank Crowley Courts Building downtown at 5pm, with differing messages. 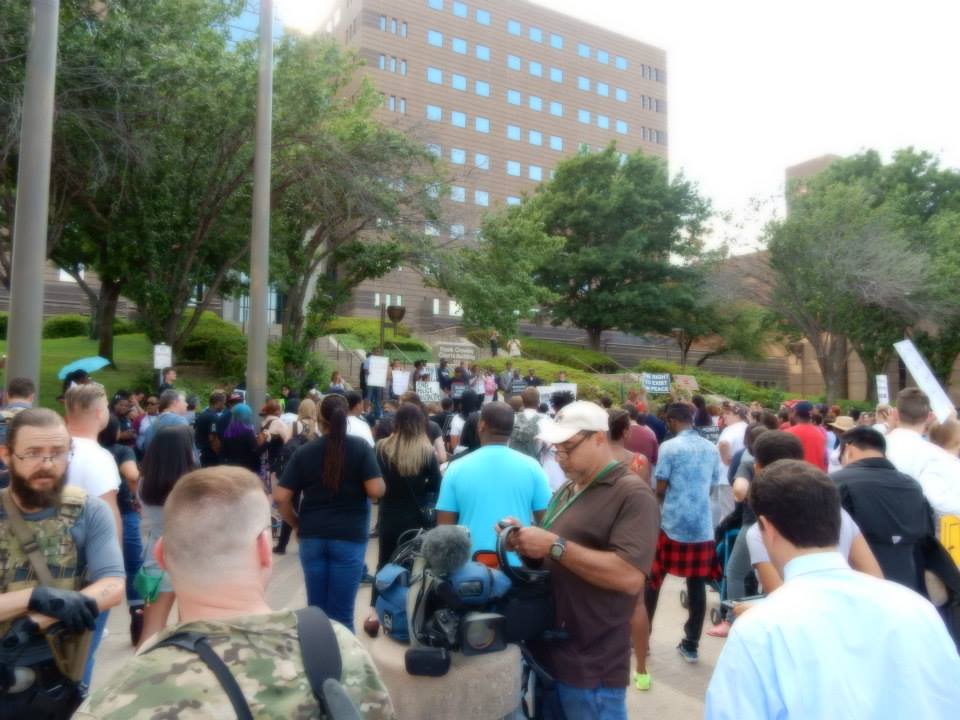 Then, there was the Texas Organizing Project (TOP), who gathered separately in front of Dallas City Hall and called for comprehensive immigration reform. TOP had planned their rally weeks ago, according to the Fox 4 News and they joined MAPB for the downtown march.

They chanted, “What do we want? Immigration reform. When do we want it? Now!” Later, when they marched, their procession was front-ended by the American and Texas flags, the LGBT Rainbow flag held up the back-end.

A dozen people from an open carry group were there in solidarity at the sedate yet upbeat event. At its height, there were probably a few hundred people participating in the protest. 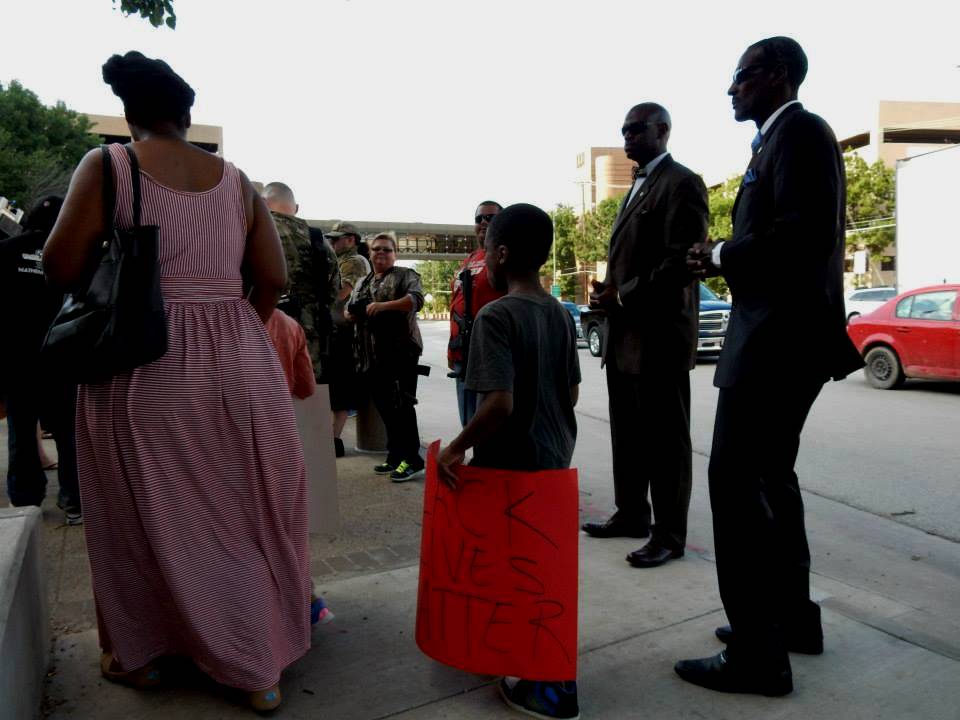 The “Dallas to Baltimore” solidarity anti-police demonstration happened hours after the announcement came that six Baltimore, MD police officers were indicted for Gray’s death. Allegedly, he died of injuries sustained during his arrest and ride in police van on April 19. Of those officers involved, three were white, three were black, Breitbart News reported.

Annie Kobus, organizer for the “Backing the Blue” event told Breitbart Texas‘ Bob Price, “I respect their rights to protest but that I don’t care for the attack on the character of the good men and women who are protecting and serving our communities. I explained that I am out here to show moral support for them..” A leader of the MAPB group agreed. “We shook hands and then went to neutral corners,” Kobus added.

“I was standing close to where the police bike officers where being dispatched and was able to thank each one as they rode by,” Kobus continued. “The last one to ride by turned his bike around and handed me a bottled water and thanked me for being there. I will never forget that unexpected gesture.”

Some downtown busineses closed early to better ensure employees got home before foot and vehicular traffic became and issue, according to NBC DFW. After the respective groups rallied, they marched. The Dallas Police Department (DPD) monitored, steered foot traffic and guided vehicles on the ground, by bicycle and in squad cars.

DPD tweeted several times to let folks know that Air 1 was in the air over the Dallas metro area to help guide officers on the ground to better protect all participants. They also tweeted about road closures in real time,”Streets in the North Downtown area have been temporarily closed as officers work to make sure everyone is safe.”

.@DPDAir1 is in the air over Downtown Dallas to help guide Officers on the ground to better protect all participants. pic.twitter.com/6admCBXz99 — Dallas Police Depart (@DallasPD) May 1, 2015

Signature cause mantras were heard like “What do we want? – Justice. When do we want it? – Now,” “No justice, no peace,” “Don’t shoot” and “Justice now.” The merged groups began to dwindle as night fell. A smaller group of 50-75 protestors remained and walked across the downtown Margaret Hunt Hill Bridge, another smaller group went into the city’s West End. A respectably sized third group tried to take the demonstration onto I-35, a major freeway artery. Police tailed them with approximately 20-30 squad cars to prevent the protestors from blocking traffic.

In all cases, they turned around without incident. Shortly before 9pm, they made their way into Dallas but it appeared that a marcher had either been injured or fallen ill. Dallas Fire & Rescue was on scene and individual was placed in ambulance. Fox 4 News since reported that following the police escorted jaunt into the city’s West End district, the protestors turned around abruptly and they began walking in front of slowly moving squad cars. One of them hit a man, who was taken to the nearby Parkland Hospital. His condition was unknown at the time of this report. The protest marches ended with no reported arrests, said the Dallas Morning News. Officer Juan Fernandez, a DPD spokesman, told them that people would be able to march and protest as long as they remained peaceful. That it was. WFAA 8 tweeted about one anxious incident during the march where protestors surrounded one police vehicle a little before 9pm. “Tense moments.” They wrote. “Crowd is now marching again.”

There were also Dallas-centric messages like “Dallas Police Stop Killing Our Sons,”  “Clinton Allen Unarmed, Shot Seven Times,” referencing a 25-year-old who was killed by an officer in 2013. The officer reportedly had a history of trouble. He shot the unarmed Allen in a struggle but, according to the Dallas Morning News, authorities said Allen was choking the officer and had PCP in his system at the time of the confrontation.

One final sign read “Dallas is Baltimore” and if the world saw one thing during the polite protests on Friday night, they saw — Dallas is not Baltimore.