BROWNSVILLE, Texas — Indian authorities, along with the Interpol and U.S. authorities, are working at extraditing a convicted murderer who not only became a famous fugitive featured on national television, but also became a symbol of the deep-rooted corruption on the Texas border.

Convicted murderer Amit Livingston was featured on the now defunct America’s Most Wanted TV show following his escape from custody after he pleaded guilty, and was sentenced to 23 years in prison, for the murder of his girlfriend Hermilia Garcia Hernandez in 2007. 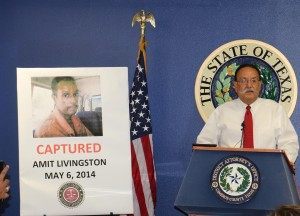 After years on the run, Indian authorities arrested 46-year-old Muddamalle Amit Livingston in May 2014 in the city of Sainikpuri, Hyderabad where he had been living under a false name and using false documents, India’s Deccan Chronicle reported.

According to information provided to Breitbart Texas by the Cameron County District Attorney’s office, Livingston was tried and convicted in Hyderabad in connection with the false identify, on the charge of failing to register as a foreigner, and sentenced to one year in prison. Once the one-year sentence was served, Livingston was transferred to New Delhi, where he is expected to be extradited.

This week, Cameron County District Attorney Luis V. Saenz announced that the process was underway to bring Livingston to Texas, where he is expected to serve out the 23 year sentence that he received in 2007 before fleeing. 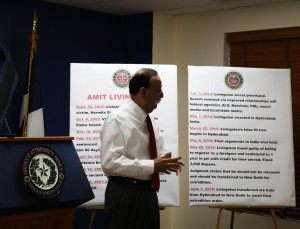 Livingston was able to flee in 2007, even after pleading guilty, thanks to the help of former 404th State District Judge and former Cameron County District Attorney Armando Villalobos, who took part in a convoluted scheme in order to be able to split the $500,000 used to secure his release during trial, court records obtained by Breitbart Texas from a massive corruption case in Cameron County revealed.

Limas accepted Livingston’s plea and sentenced him the same day freeing up the bond.  Moments after sentencing him Limas, gave Livingston 60 days of freedom in order to get his affairs in order before turning himself in to serve his sentence. As expected, Livingston fled and spent years on the run.

The unusual move by Limas was part of a brokered deal with Villalobos, who was the DA at the time, and attorney Eddie Lucio (not related to the two Texas politicians by the same name), who had been representing the victim’s children in a lawsuit. The two attorneys were able to use the bond money to pay off the lawsuit and split the money from the attorney’s fees.

In 2011 Limas pleaded guilty to a series of federal corruption charges and testified against multiple other attorneys, a scandal that rocked the legal system in Cameron County. The scandal landed former DA Villalobos and multiple attorneys who had been bribing their way through the legal system in prison.

The hunt for Livingston was reignited by Luis V. Saenz, who took office at Cameron County DA in 2013 and began trying to repair the damage left behind by Villalobos. By the time Saenz picked up the case, it had been dormant for five years.

“As many of you know, the Livingston case was at the heart of a corruption scandal, and this extradition will finally close a chapter in Cameron County history,” Melissa Landin with the DA’s office told Breitbart Texas.