MCALLEN, Texas — In one of the poorest counties in the nation, Presidential Candidate Hillary Clinton and her supporters are set to hold a lavish banquet. Hidalgo County is home to some of the nation’s poorest families, many of whom would not ever be able to afford to attend. 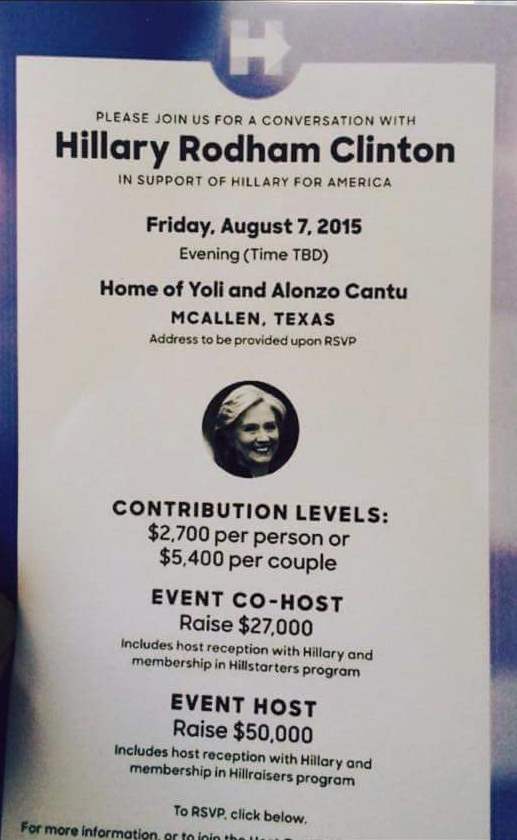 The event will be held in the home of Alonzo Cantu, a local developer with a long history of fundraising for Secretary Clinton and her husband, former President Bill Clinton. In 2007, Cantu was profiled by the Washington Post for his ability to raise vast sums of money for his candidates. In February, 2011, Texas Monthly’s Paul Burka and Patti Hart named Cantu as one of the most powerful people in the Lone Star State.

In the Rio Grande Valley, which is right on the border with Mexico, Cantu is considered to be a political powerhouse. He has a long history of making donations to officials at the local, state and federal level in order to keep their attention.

“Because of his financial interests, Cantu’s influence over potential donors is substantial,” the Washington Post reported about Cantu’s ability to bully donors into handing over cash.” He has raised money from doctors who work at the hospital where he holds an ownership interest, from bankers who work at the bank he co-owns, and from the scores of tradesmen who contract with his primary business, Cantu Construction and Development Co. The company is one of the McAllen’s dominant residential and commercial builders.

Cantu’s vast financial network allows him to hustle his clients or business partners for campaign donations.

“When Alonzo comes through the door, you want to give to him,” the Washington Post article quotes Gerardo J. Reyna who donated money and is described as Cantu’s brother in law and the owner of a company that provides most of the floor coverings for the homes and offices built by Cantu. “The last thing you want to do is get on Alonzo’s bad side.”

Most recently, a political action committee, Border Health PAC, has been behind the efforts to create a hospital district that would be taxing entity and thus further tax the residents of the area. Cantu serves as a board member of the PAC. The district’s opponents claim that the measure is similar to double dipping since the region is expected to get a medical school through the UT System which already has funding.

As Breitbart Texas previously reported, an outspoken military vet who posted videos against Cantu’s hospital district ended up being harassed by local police.

Clinton famously said she and the former president were “dead broke” when they left the White House in 2000 and moved into their $11 million Westchester County mansion in New York. In July, 2014, she told Fusion TV’s Jorge Ramos she regretted the comment. “It was inartful,” she said. “It was accurate.” There are many “dead broke” people living in the town where she will be scarfing down elegant food and raking in large bundles of cash. Not many of McAllen’s dead broke live in $11 million mansions.

It is not known if Mrs. Clinton’s schedule will allow her an opportunity to learn from McAllen what “dead broke” really means.