RIO GRANDE CITY, Texas — The Texas Rangers have begun an investigation into border law enforcement officials over cash evidence missing from the vault.

The investigation is still in the early stages. Rumors about the investigation; however, have sparked a wildfire of controversy over the long history of cases dealing with border law enforcement officials and corruption.

Breitbart Texas obtained a letter that 229th District Attorney Omar Escobar sent to the Texas Rangers on January 6, asking for the assistance of an outside agency to look into cash that was taken from the evidence vault pointing to possible charges of theft by a public servant or abuse of official capacity. “The developments of this case necessitates the involvement of the Texas Rangers,” Escobar stated in the letter. 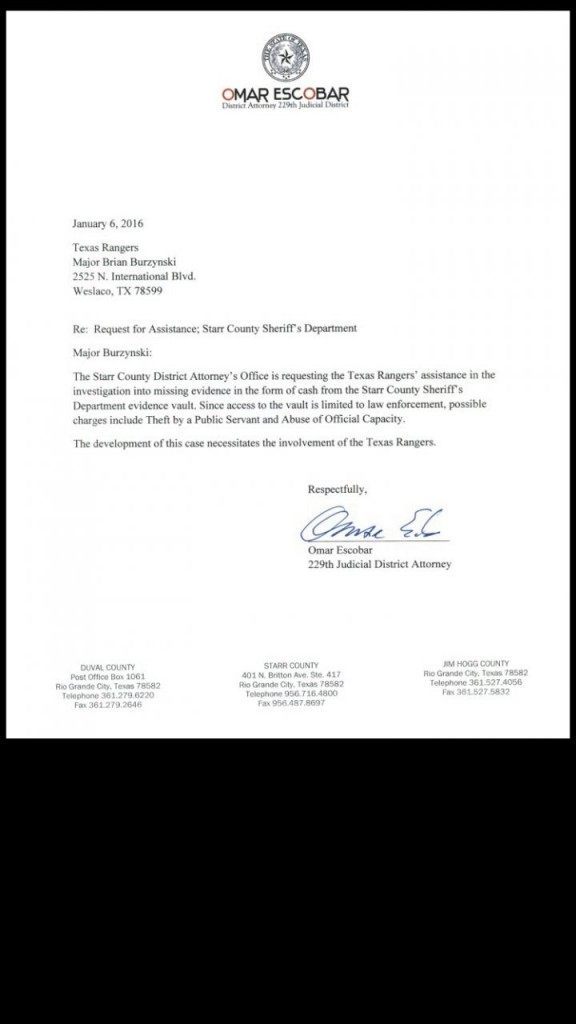 Sources close to the case claim that the money went missing in September. However, in statements made by Starr County Attorney Victor Canales (a separate office form 229th DA’s Office) to local news outlets, he claimed that the Starr County Sheriff’s Office learned of the missing funds in December and then contacted him. He subsequently contacted the Texas Rangers.

The Starr County Sheriff’s Office provided Breitbart Texas with a statement claiming the office itself is not the target of the investigation.

“The case does involve missing seized money from a secured area; however, it was the Starr County Sheriff’s Officer that initiated the investigation,” the statement revealed.

Starr County is the same border region that has been the topic of much debate following the arrest of their former tax collector and 15 others including most of her staff late last year. These arrests, as Breitbart Texas previously reported, have been tied to multiple bribery and corruption charges.

Since that time, Starr County Judge Eloy Vera has been the target of criticism over claims that he forced the interim tax collector out of office by not hiring new staff to replace the staff that was arrested. According to his detractors, the move was done so he could have a political ally appointed. During the meeting to have his new appointee named, Vera ordered sheriff’s deputies to throw out protesters who had donned Guy Fawkes masks to the meeting.

In response to the criticism over the tax collector position, Vera told local TV reporter Analise Ortiz, “The tax assessor-collector chaos isn’t something commissioners caused, the voting public caused it.” 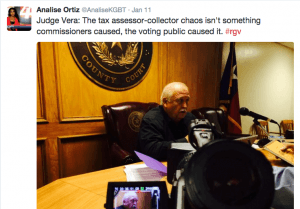 Starr County is the same county where, as Breitbart Texas reported, Justice of the Peace Salvador Zarate ended up behind bars on bribery charges after he allegedly took a cash bribe from two individuals on Christmas Eve 2014 in exchange for a lower bond. When authorities asked him about the money, the former judge is quoted as having said “You’re going to leave me without my Christmas money,”

As previously reported by Breitbart Texas corruption in Starr County and in their law enforcement officials dates back years: