HOUSTON, Texas — Republican presidential candidate and Texas Ted Cruz greeted 1,200 excited followers in his hometown and told them, “Donald Trump does not get to exploit the immigration laws and take advantage of American workers, and then pretend he is going to be a champion for American workers.”

“For too many years, we have seen deal-makers in Washington, that cut deals that benefit big business, benefit the special interests, and leave in the dark, the working men and women in this country.” Cruz said on the eve of the Super Tuesday primary in Texas. “You know, no issue captures that more powerfully than immigration.” 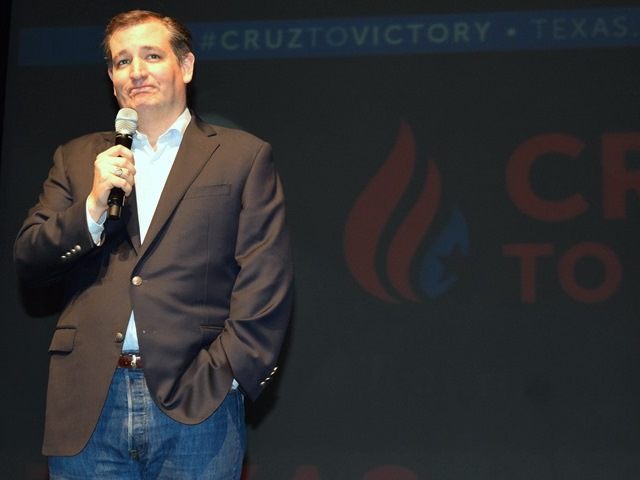 He continued, “When you allow 12 million people to come into this country illegally, it takes away jobs from millions of Americans, from millions of legal immigrants, and drives down wages for everyone.”

He said “the unfortunate truth” is “both parties are responsible.” He said, “Democrats support illegal immigration because they think they can get votes.” Cruz added, “You know there is a new politically correct term for ‘illegal immigrant.’ It’s called ‘undocumented Democrats.'”

“The unfortunate truth is that an awful lot of establishment Republicans in Washington, also support illegal immigration because Wall Street and the U.S. Chamber of Commerce and big business, view it as cheap labor. Drive down the wages, all the better,” he said.

Cruz reminded the crowd of something they already understood, that in a Republican primary, every candidate must say they oppose illegal immigration. He invoked laughter when he said, “politicians sometimes say one thing and do something else.” 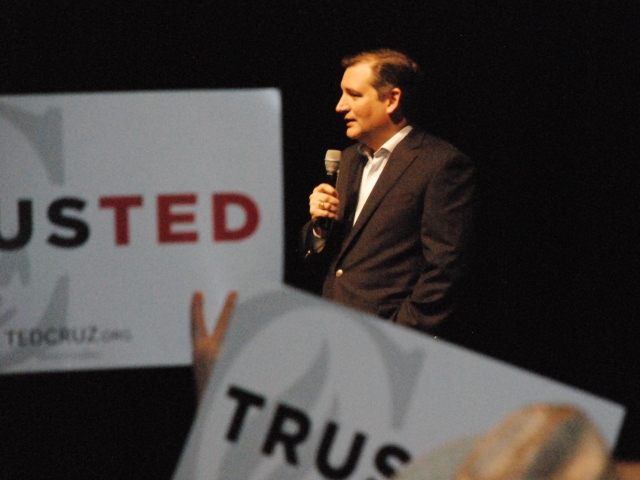 He continued, “If you want to know where anyone stands on illegal immigration, the question to ask is in 2013 when we had the battle over amnesty, where did you stand?” Cruz said that Marco Rubio decided to stand with Barack Obama, Harry Reed and Chuck Schumer and lead the fight to pass the Gang of Eight amnesty bill.

Cruz said he “made a very, very, different decision to stand with millions of working men and women across this country and lead the fight to defeat amnesty.”

He quipped, “I am told that Donald Trump talks a fair amount about immigration.” He said “That leads to the natural question, in 2013, in the amnesty battle, where was Donald?” A few in the crowd yelled – “Hiring illegals.” Cruz laughed and added, Trump was funding the Gang of Eight.

Cruz told his supporters gathered at Houston Baptist University that the New York businessman gave over $50,000 collectively to five of the eight senators who were part of the Gang of Eight.

“You don’t get to fund open-border Democrats for four decades, and then suddenly when you run for president, discover and announce that you are for securing the border. It doesn’t work that way,” Cruz said.

He said that during the last presidential debate Americans learned that a $1 million judgment had been assessed against Trump for hiring illegal immigrants. Cruz said that Trump answered that this occurred a long time ago. Cruz asked. “What about last week?”

Cruz related that the news broke recently that Trump brought in hundreds of foreign workers to work at his hotel in Florida. Cruz said Trump went on television and said Americans aren’t qualified and aren’t willing to work as waiters and waitresses. He asked those in the audience to raise their hands if they had every worked as a waiter or waitress.

Cruz said that of the 300 Americans that applied for jobs at Trump’s hotel, the presidential candidate hired only 17 Americans. The Texas senator said he understands that foreign workers work for much lower wages, and they “are held captive” because they can’t go work for a competitor, and that this is good for “big business.”

Cruz charged, “Donald Trump does not get to exploit the immigration laws and take advantage of American workers, and then pretend he is going to be a champion for American workers.”

He also told the pachyderms gathered that on Monday, the news broke that the New York Times editorial board has a secret tape of an interview they conducted earlier this year with Trump.

Cruz urged as to Trump, “You know all of that immigration stuff, you know that wall I said I am going to build. I don’t mean any of it. I don’t intend to do any of it. None of it is true.” Cruz said the Times said they could not release the tape because Trump’s interview contained off-the-record conversations. 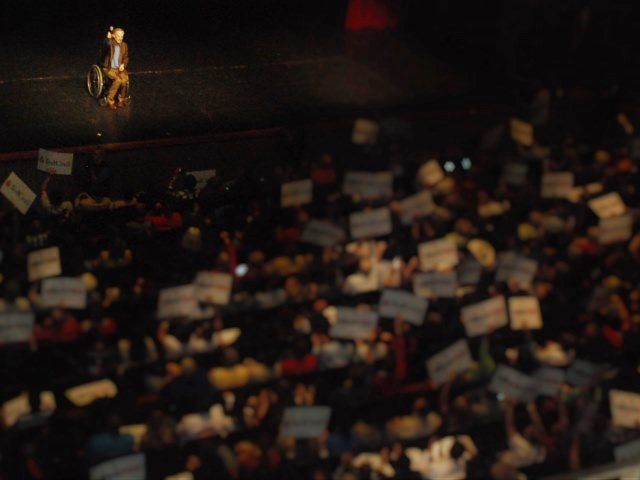 Texas Governor Greg Abbott takes center stage to urge attendees to get out the vote for his former employee, Ted Cruz. (Photo Courtesy of Steve Kusner)

Cruz said, “Donald, I call on you now, allow the Times to release the tape!” The freshman senator from Texas said that voters deserve to know what Trump told the Times before they vote.

Cruz was in Houston with Texas Governor Greg Abbott, former Texas Governor Rick Perry, Louie Gohmert, and Lt. Gov. Dan Patrick. All four Texans have endorsed him. As reported by Breitbart Texas, Cruz spent his last day before the election with the men traveling the state of Texas.

Lana Shadwick is a writer and legal analyst for Breitbart Texas. Follow her on Twitter@LanaShadwick2