HOUSTON, Texas — Floods ravage Texas as massive slow-moving thunderstorms dumped over a foot of rain in some parts of Texas shutting down major cities with street flooding.

Residents of Houston are being urged by officials to stay home on Monday as major freeways began to look more like rivers than streets. Up to 10 inches of rain fell overnight in widespread areas of northwest Houston. Some areas received as much as two feet of rain in isolated areas, Fox 26 reported.

“Stay off the roads unless it is an absolute emergency,” Houston Mayor Sylvester Turner told residents during a Monday afternoon press conference.

Monday is also income tax filing day for Houstonians. Officials from the Harris County Office of Homeland Security and Emergency Management tweeted out that they are working with IRS officials for an extension.

In Waller County, located northwest of Houston, Sheriff Glenn Smith called out for assistance in a large number of water rescue calls.

If you have a boat and are not flooded in and are able to assist, please contact the Waller County Sheriff’s Office at 979-826-8282. Ask for dispatch. Let them know, the size of boat and the area you are in. Thank you all.

Houston Mayor Sylvester Turner told reporters Monday morning that seven of the cities numerous bayous were at or over their banks, Fox 26 reported.

Fox 26’s Sally McDonald reported from Sping, located north of Houston. McDonald reported from a subdivision with street flooding where residents said they haven’t seen this level of flooding since Tropical Storm Allison in 2001. Allison dumped over 40 inches of rain in Texas, mostly in Houston, causing billions of dollars in damage. McDonald then moved to an apartment complex where water rescue operations were underway. 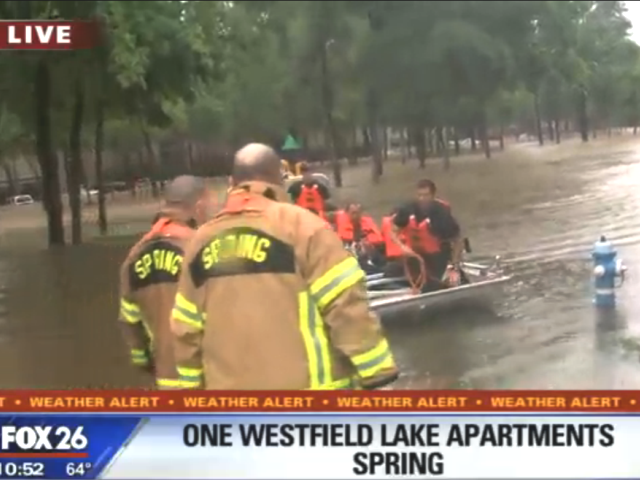 In what has become a common scene, Harris County Judge Ed Emmett (the county’s top executive officer) stepped before the television cameras at the county’s emergency operation center and announced a disaster declaration for the county. Emmett called the rainfall a “very significant event.”

The county judge told reporters over 1,000 homes have been flooded so far. “Some of these have never flooded before,” Emmett told reporters. He said the of the county’s 22 bayous and creeks, 13 were already out of their banks.

The judge reiterated the safety phrase, “Turn around – don’t drown.” When asked how this event compared to Tropical Storm Allison, Emmett said “We’re not there yet,” but added more rain is forecast over the next few days for the Houston area.

Fox 26’s Greg Groogan reported from southwest Houston where Brays Bayou was at flood stage. High water rose to within a foot or so of a bridge crossing the raging bayou.

CenterPoint Energy is reporting more than 80,000 customers are currently without electricity. 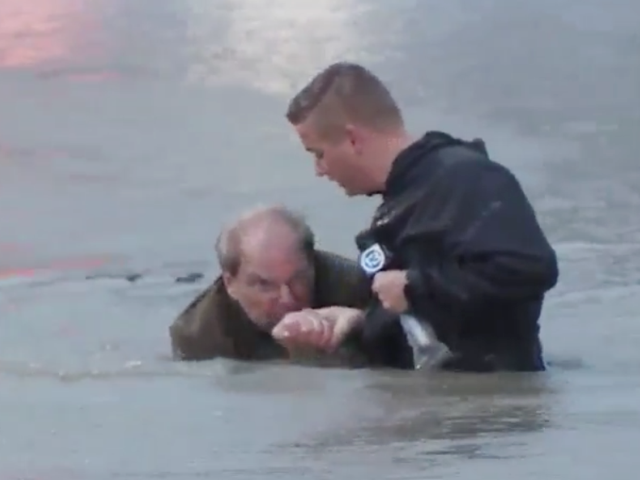 The Harris County emergency management officials reported more than 1,200 water rescues had occurred. In one rescue that was not likely included in that number, an ABC 13 reporter waded into a flooded street to rescue a driver whose car became flooded in the heavy rains.

Rains continue on Monday and are expected to continue for most of this week.