The Austin American-Statesman issued an apology after tweeting a cartoon of Texas Governor Greg Abbott with his pants in flames while sitting in his wheelchair. The cartoon was tweeted on Wednesday afternoon in connection with an opinion piece that was previously published in April, before the governor’s accident where he was severely burned.

The Austin newspaper tweeted the cartoon on Wednesday in connection with an editorial about the 5th Circuit Court of Appeals ruling on the Texas Voter-ID law. The cartoon by M. Scott Byers shows Governor Abbott sitting in his wheelchair saying, “In fact, voter fraud in Texas is aah, rampant!” The cartoon was attached to a tweet linking to an opinion piece by Glenn W. Smith about the ruling. Smith claims “voter suppression is a recipe for income inequality.” 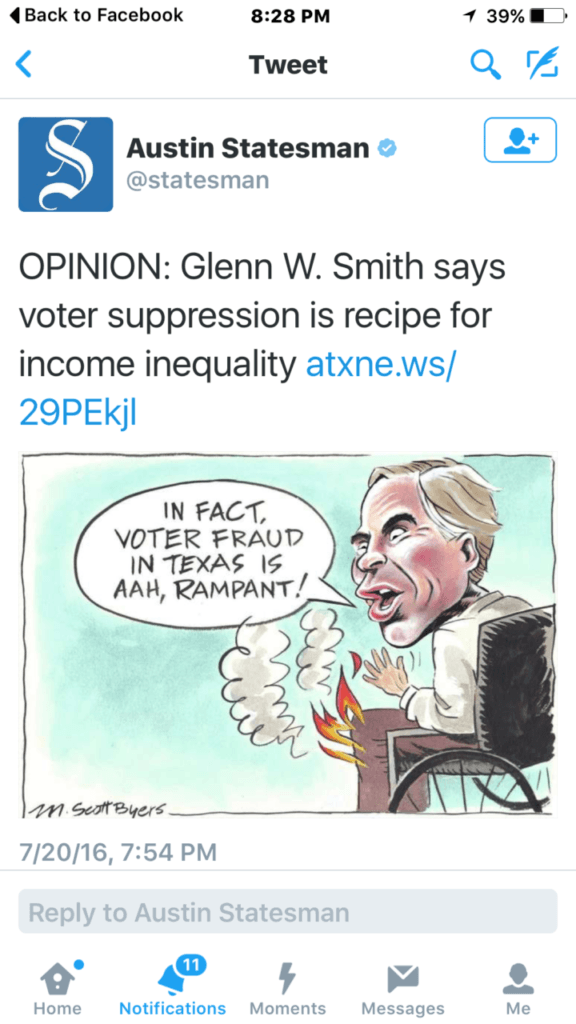 Breitbart Texas spoke with Michael Adams, an Austin American-Statesman editor, who confirmed the tweet had been sent out. He said they quickly recognized the cartoon’s bad taste following the accident that left Abbott severely burned on both of his lower legs and feet. The cartoon shows the governor’s lower legs in flames. The governor spent several days in Brooks Army Medical Center’s burn unit receiving skin grafts and treatments for infections.

Adams said they quickly took down the cartoon and deleted the tweet. The new outlet then tweeted an apology to its readers and to Governor Abbott. The tweet, issued at about 8 p.m.  Wednesday evening, stated, “We reposted an April voter ID commentary with its original cartoon, now obviously inappropriate in light of @GovAbbott accident.” The second part of the tweet states, “We have deleted the tweet, and apologize to our readers and especially @GovAbbott.”

We reposted an April voter ID commentary with its original cartoon, now obviously inappropriate in light of @GovAbbott accident. (1/2)

We have deleted the tweet, and apologize to our readers and especially @GovAbbott. (2/2)

On the issue of the 5th Circuit’s opinion on the Texas Voter ID law, Abbott issued a statement saying, “The 5th Circuit rightly reversed the lower court’s finding of discriminatory purpose, but wrongly concluded the law had a discriminatory effect. Voter fraud is real, and it undermines the integrity of the election process. As Attorney General I prosecuted cases against voter fraud across the State, and Texas will continue to make sure there is no illegal voting at the ballot box.”

Smith previously teamed up with Byers on another editorial piece mocking Governor Abbott’s call for a constitutional convention of states to reign in the out-of-control federal government. The opinion piece asks the question “What would Texas be like under Abbott’s disunion constitution?”