The Guardian scrambled to rebut Breitbart Texas’ analysis of its fake news article about border crossing numbers and deportations. The left-leaning paper adopts a dubious combination of semantic games; statistical sleight of hand; and cherry-picking data to draw generalized conclusions–all while misleading its own readers of its ability to defend original reporting on the border.

“[W]e refute Breitbart’s claims about the original Guardian story, which the site called a mix of falsehoods, inaccuracies and misleading information designed to minimise the “crisis” of an unsecured border,” the Guardian wrote in its rebuttal.

“The rightwing site accused the Guardian of disseminating false information for reporting a fundamental and demonstrably provable fact: that the number of undocumented border crossers is near a historic low,” the article continues. Note that the article references “border crossers”. The term refers to anyone crossing the border illegally whether captured or not.

The news outlet goes on to defend its original story by referencing Customs and Border Protection (CBP) reports about border apprehensions along the southwest border. The article attempts to further justify its claims by going back more than 40 years, something not referenced in the original article.

A leaked report from the Department of Homeland Security (DHS) disclosed that nearly half of those crossing the U.S. borders go undetected, according to an AP article reported by Breitbart Texas in October. The report revealed that only 54 percent of those crossing the border illegally during FY 2015 were captured. The agency had previously publicly claimed an 81 percent success rate the AP reported, though they knew internally that this was not true.

The President-Elect’s campaign and the voters who supported him were not focused on 40-year-old numbers during the campaign. Clearly the emphasis was on the disturbing trend of Unaccompanied Alien Children (UAC) and Family Unit Apprehensions (FMUA) that CBP officials have been reporting. Those numbers continue to rise at an alarming rate. The crimes committed by people illegally in this country were also raised by the campaign.

Breitbart Texas Managing Director Brandon Darby challenged The Guardian’s writer on his use of the phrase “border crossers” via Twitter.

The author responded, changing his assertion to “current border crossing numbers are very low looking back 40 years, right?” In his original article, the author did not say “very low” nor did he reference a 40-year report in the original article.

@brandondarby But let’s get back to main issue: current border crossing numbers are very low looking back 40 years, right?

Darby responded by reasserting the distinction between illegal border crossings and apprehensions along one border of the country.

The author finally admitted the conflation of the two separate statistics claiming that “apprehensions are a barometer for overall crossings.”

@brandondarby apprehensions a barometer for overall crossings, one thing everyone agrees on. what’s your point?

Darby then attempted to discuss the other inaccuracies of The Guardian‘s article. The author responded “I gotta hit the road. But happy to resume this thread another time.”

@brandondarby Look forward to reading that. I gotta hit the road. But happy to resume this thread another time.

The Guardian‘s response article attempted to defend its false claim that President Obama “deported a record 2.5 million people.” Breitbart Texas disputed this claim, as has the Center for Immigration Studies. The fact is, the Obama Administration has doctored the reports to classify people turned back at the border as “deportations” rather than “returns”. Therefore, The Guardian parroted the claim that Obama deported 2.5 million–more than any other–but the original article did not disclose that the Administration changed the definition of “deportations”.

In defending its claim, the response article admits to the change in statistical reporting by the Obama Administration–a fact the paper neglected to inform its readers of. They wrote, “If you include returnees as well as deportees, the Clinton and Bush administrations sent back far more people than the Obama administration.”

The article uses a misleading chart the Guardian compiled from a DHS report that portrays a dramatic increase in “U.S. Immigration Removals.” However, when you dig into the statistics behind the graphic a surprising set of numbers are revealed. 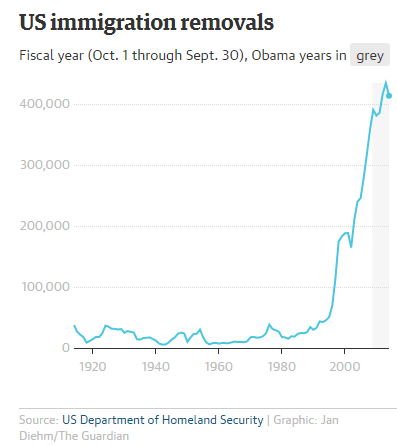 The Obama Administration has been allowing the massive numbers of UACs and FMUAs to remain in the United States after they are apprehended at the border. These numbers also impact the ratio of apprehensions versus unreported border crossers as a very high percentage of the UAC and FMUA border crossers turn themselves in to the first Border Patrol agent they find.

The Guardian’s rebuttal also attempts to defend its claim that President-Elect Trump called all Mexicans rapists and criminals. The author defended the charge stating, “The Guardian did not say he referred to all Mexicans.”

Here is what the original article stated: “Donald Trump denigrated Mexicans, calling them rapists and criminals.” The article says “Mexicans,” not “some Mexicans,” or not “a percentage of Mexicans.”

The article then deflects from the original claim by throwing in statistics about the crime rate of all immigrants:

In vowing to promptly remove 2-3 million criminal aliens, Trump appears to draw on, and inflate, the 1.9 million non-citizens identified by Homeland Security as removable criminal aliens.

However most of those 1.9 million are here legally. Only 820,000 are undocumented, according to an analysis by the nonprofit Immigration Policy Center. Which means that of 10 million undocumented adults in the US, 8.2% have a criminal record and 3% have committed a felony. The respective rates for the US adult population are 27.8% and 8.6%.

So, like Trump, the Guardian admits that some Mexicans are rapists and criminals.