The report (attached below) issued by ICE Inspector General (IG) John Roth last week details several failures under the previous administration that built a tremendous backlog for deportation officers (DO). Those failures include imbalanced workloads for DOs, unachievable goals, a lack of clear policies and procedures, and insufficient training.

ICE deportation officers work on deporting aliens who are in a detained or non-detained status. This report focuses on the efforts by ICE DOs working with the immigration court’s non-detained docket. The non-detained aliens are considered to be under “supervision,” Roth states in his memorandum dated April 13. His report covers the period where massive numbers of Unaccompanied Alien Children (UAC) and Family Unit Aliens (FMUA) began crossing the borders in 2014. During FY 2014, Border Patrol agents apprehended nearly a half-million illegal border crossers, a 16 percent increase over the previous year and a 34 percent increase over FY 2012, the report states. The surge led to a tremendous increase in workload for ICE DOs charged with detaining, deporting, and supervising these aliens.

As a result, the Obama Administration announced its “Priority Enforcement Program” (PEP) in November 2014 claiming to focus on the removal of certain criminal aliens including those convicted of felonies, multiple misdemeanors, and “significant” misdemeanors (e.g., domestic violence, sexual abuse, and sexual exploitation). It also prioritized aliens who entered, or re-entered, the country illegally and could not prove continuous presence since January 1, 2014. Breitbart Texas Editor-in-Chief Brandon Darby reported on the PEP, calling it “catch and release 2.0.”  Border Patrol agents and sheriff’s across the southwest complained that the Obama Administration placed handcuffs on law enforcement instead of the criminals.

As a result of this failed program, ICE DOs are now supervising more than 2.2 million aliens as of the end of August 2016. Of that number, 368,574 of the aliens are convicted criminals. During FY 2015, the first year of the PEP, ICE DOs removed or returned only 235,413 aliens – including 139,368 convicted criminals.

The ICE OIG report details systematic failures within the organization that creates inefficiencies in capturing and removing “supervised” aliens.

ICE does not collect and analyze data about employee workloads to determine where resources should be applied and apply reasonably achievable caseloads for DOs, the report concludes. Roth continues, stating that ICE failed to provide “well-defined policies and procedures” to its employees. The agency also neglected to communicate the department’s priorities for deportation to its officers.

“These management deficiencies and unresolved obstacles make it difficult for ICE to deport aliens expeditiously,” Roth stated. “ICE is almost certainly not deporting all the aliens who could be deported and will likely not be able to keep up with growing numbers of deportable aliens.”

Roth cites an imbalance between caseloads assigned to DOs working non-detained aliens and those assigned to supervise detained aliens. He said that despite the different requirements for supervising the two classifications of aliens, ICE could not explain the reasons for manpower assignments in the locations visited during the inspection.

“Many of those working with non-detained aliens reported they had difficulty fulfilling all their responsibilities, such as working with embassies and consulates to obtain travel documents necessary for deportation, interviewing aliens under their supervision, and running criminal checks on aliens in their docket,” Roth wrote in the report. “Yet, ICE has not collected or analyzed workload data to determine the time and effort DOs need to adequately supervise and facilitate the deportation of non-detained aliens. Without workload data, ICE cannot ensure its caseload distribution is balanced and that non-detained workloads are achievable. ICE also cannot measure performance and apply lessons learned to ensure effective and efficient supervision and deportation of aliens.” 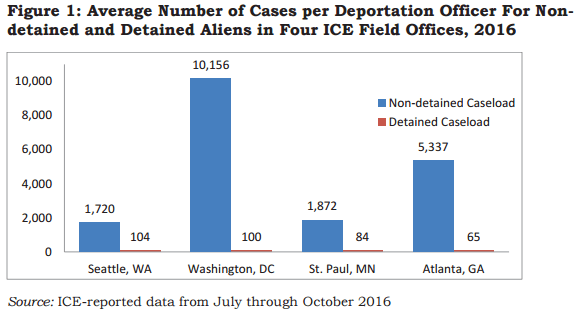 “ICE personnel at all four field offices agreed that the workloads of DOs supervising non-detained aliens are unmanageable, yet ICE has not tried to determine what is achievable and what would alleviate the burden,” the IG continued.

The OIG report supports this, stating that DOs are frequently asked to perform “collateral” duties including:

Across the board, Roth reported that DOs report they do not have the time necessary to obtain required travel documents to deport the aliens under their supervision. “According to the DOs, their collateral duties leave them time only to deal with daily scheduled check-in appointments and unscheduled visits by aliens, answer phone calls from aliens, and input new cases into the electronic system,” the report explains. “One DO also reported that because of competing work responsibilities criminal background checks are not conducted every time a non-detained alien checks in with the field office.”

Roth states in the report that ICE management fails to adequately collect data to determine how much staff is needed to handle the non-detained aliens under their supervision.  He continues; explaining that in 2009, ICE did develop a staffing model to reorganize the DOs throughout filed offices. However, the staffing model “has never been used to allocate human resources at field offices.”

Roth’s report points out the agencies failure to adequately communicate its policies or to provide DOs with readily accessible guidelines to assist the DOs in supervising and deporting aliens. “Guidance is often communicated to field office personnel orally or by email, rather than through formal, documented policies and procedures,” the IG report states. “These deficiencies hinder proper supervision of non-detained aliens, including those who may be fugitives or who commit crimes. Field office staff confirmed that ICE’s available policies and procedures did not help them properly manage their non-detained cases.”

The report confirms that the ICE deportation policies and procedures are “outdated and unclear.”

“Officials we interviewed said ICE considers the 2003 Detention and Removal Operations Policy and Procedure Manual (manual) ‘the official guide’ to operations,” Roth explained, “but ICE has not periodically reviewed the manual or revised it since 2008.” He said that rather than properly amend and update the manual, ICE officials would simply “affix a memo to the front of the appropriate chapter” to indicate changes in policies.

Because of the failure to properly manage and communicate policies and changes, ICE field office policies and procedures tended to vary widely from office to office.

The report accuses management providing inadequate training and incomplete documentation of training for DOs. “From July to September 2016, ICE headquarters scheduled non-detained training for all 24 field offices but did not plan for recurring training nor document training attendance to ensure all required staff attended,” Roth stated. “In our opinion, the training did not fully cover all necessary information.”

The report explains complications in attempting to deport aliens to certain countries. It states that for some nations, it is nearly impossible to repatriate foreign nationals.

For ICE to deport an alien to his or her home country, the country must agree to repatriation. As of August 2016, ICE had identified 23 “uncooperative” countries to which it generally cannot deport aliens. To help deport aliens to these countries ICE may request diplomatic intervention by the Department of State, which determines whether and what action to take against the country. ICE officials also said that some countries, such as China, Bangladesh, and India, restrict the number of aliens for whom they will issue travel documents and accept for repatriation. Finally, ICE has identified 62 countries that are cooperative, but with which it has experienced delays in obtaining required travel documents. Deporting aliens to these 62 countries also requires more time and effort working with embassies and consulates to obtain travel documents and approval for alien repatriation.

In July 2016, Senator John Cornyn (R-TX) introduced a bill to provide remedies for countries that refuse to accept the deportation of their citizens, Breitbart Texas’ Lana Shadwick reported. The measure is similar to legislation filed by Representative Ted Poe (R-TX) that called for restricting diplomatic visas to countries that deny or unreasonably delay the repatriation of their citizens subject to deportation from the U.S.

“The bill would require that the Department of Homeland Security (DHS) establish procedures to determine whether a foreign country systematically and unreasonably refuses or delays the repatriation of nationals who are in the United States, and have been convicted of a felony or crime of violence, or are a threat to national security or public safety,” a statement from the Senator Cornyn’s office reported. “Once it has been established that a country meets this criteria, DHS and the State Department would then notify their government that the United States may deny visas to their citizens.”

That same month, the Center for Immigration Studies’ Jessica Vaughn reported that nearly 1,000,000 illegal aliens ignored deportation orders from an immigration judge, including nearly 200,000 criminal aliens. Her report confirms the refusal of countries to accept repatriation as one of the primary causes contributing to the hi number of non-removals by ICE.

Roth’s report concludes with a statement indicating inadequacies in ICE’s management of the agency’s deportation operations. “These weaknesses are hampering ICE’s ability to adequately supervise aliens awaiting immigration hearings, as well as efforts to deport those who should be deported, including some convicted criminals,” the IG concluded. “Factors beyond ICE’s control may virtually prohibit www.oig.dhs.gov 9 OIG-17-51 OFFICE OF INSPECTOR GENERAL Department of Homeland Security deportation to some countries. In general, however, a more organized, diligent, and complete approach to management would help ICE deport aliens expeditiously and keep up with growing numbers of aliens who should be deported.”

The report, attached below, lists a series of recommendations:

Recommendation 3: Based on a completed comprehensive review, develop a plan to identify and implement appropriate staffing of Deportation Officers.

Recommendation 5: Collaborate with the Department of State to identify potential mechanisms to address issues that hinder deportation efforts.

ICE officials concurred with all five recommendations contained in the report, Roth stated. Management states they have begun implementing changes to correct the identified weaknesses.