Arlington, Texas, Police Department officials (APD) confirmed to Breitbart Texas that the now deceased shooter in Wednesday night’s attack on a sports bar/restaurant was prevented from doing “significant harm causing significant loss of life” by a man with a license to carry a concealed handgun. The gunman entered the restaurant with two “fully loaded handguns” and two knives, according to police.

The gunman, 48-year-old James Jones, entered the Zona Caliente Sports Bar in Arlington Thursday evening and began shouting what witnesses described as “strange and incoherent things,” APD Spokesman Lt. Christopher Cook told Breitbart Texas in a phone interview Thursday. Upon hearing the commotion, restaurant manager Cesar Perez, 37, approached Jones to attempt to calm him down. Cook said at that point, restaurant video revealed that Jones pulled one of his guns and shot Perez, killing him.

Hearing the argument escalating at the other end of the bar, a man having dinner with his wife became concerned that the situation was growing dangerous. He instructed his wife to get on the ground before the shooting began, Cook explained.

When Jones opened fire on Perez, the customer pulled his own handgun from concealment and “engaged the bad guy,” APD said.

“When the suspect was struck the first time,” Lt. Cook explained, “the video shows he appears unaware of where the gunfire is coming from. He turns towards the door, perhaps thinking police have entered, and begins firing multiple shots in that direction.” He said the concealed handgun license holder continued firing until the suspect was no longer a threat.

“The suspect died at the scene,” Cook told Breitbart Texas.

Cook verified the civilian was properly licensed to carry the handgun and the restaurant is one that it is legal for a License to Carry holder to enter (a “blue sign” establishment). He said the shooting will be referred to the Tarrant County grand jury, per normal procedure, but he expects the intervenor will not face any charges. 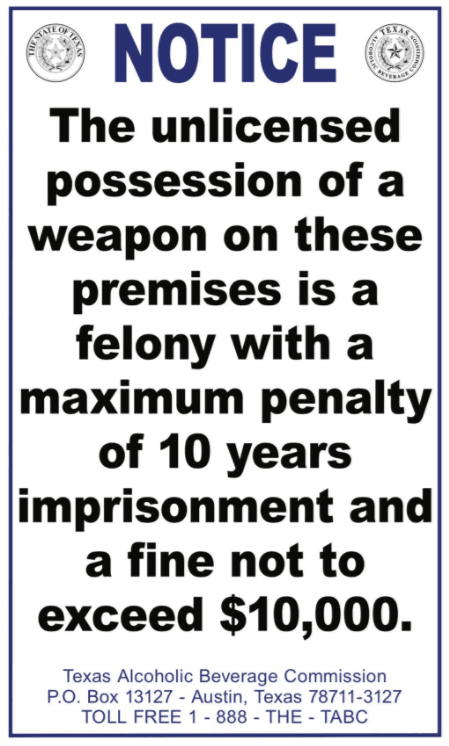 “He probably saved a lot of lives,” Cook said in a grateful tone.

The APD spokesman explained that when the medical examiner arrived, officers discovered the second, fully-loaded handgun and two knives. “He had two handguns and two knives and could have done significant harm and caused significant loss of life if he had not been stopped.”

Cook explained APD is conducting a “deep dive” search on Jones’ background. He could not confirm if the gunman has a criminal history. He said they are investigating to determine if he was under the influence of drugs or alcohol or drugs, or if he had any mental health issues. The motivation behind the attack is still unknown. Cook confirmed that Jones does not have a license to carry a handgun. He expects investigators will conduct a search of the suspect’s home and computers for signs of a motive.

“One of the firearms had no serial number,” Cook stated. “That concerns us. It appears he came to the restaurant with the intent to do harm.”

Restaurant employees told police they had never seen Jones before.