Officers with U.S. Customs and Border Protection (CBP) seized drugs worth more than $7,200,000 on one day at the Port of Nogales in Nogales, Arizona. Nogales shares a border with Sonora, Mexico, and is Arizona’s largest border city.

On Saturday afternoon, a K-9 drug detection officer alerted on a tractor trailer carrying bell peppers at the Mariposa Commercial Facility. CBP officers took the produce off of the tractor and discovered that the 46-year-old Mexican driver had 13,700 pounds of marijuana hidden in the produce. The drugs have an estimated street value of $6.85 million. 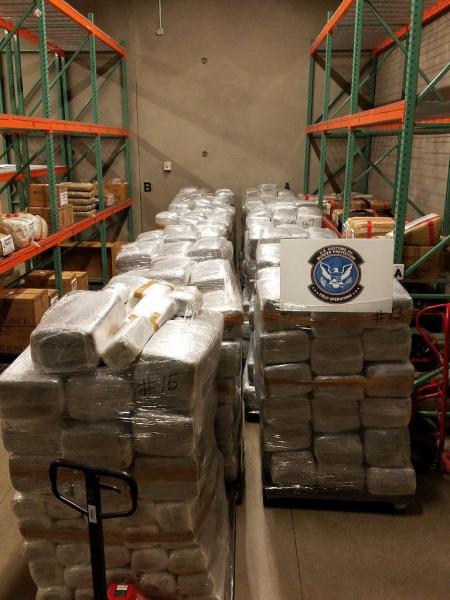 Officers located more than
13,700 pounds of marijuana
co-mingled with a shipment
of bell peppers. (Photo: U.S. Customs and Border Protection)

Officers at the Dennis DeConcini Crossing also busted a 29-year-old Mexican man. His vehicle was referred to be inspected when he reached the border crossing. A CBP drug-detection canine alerted on the Ford SUV, and officers found more than 34 pounds of cocaine hidden in the back seats. Officials estimate the value of the drug at almost $386,000.

Officers seized the vehicles used to transport the contraband along with the drugs.

In April, Breitbart Texas reported that border officials arrested a Mexican woman after she was found to be carrying the highly dangerous drug, fentanyl, in a baby stroller that was also carrying two small children. CBP officers at the Nogales Port of Entry observed the woman crossing the pedestrian lanes. They directed her to a secondary inspection station where a K-9 officer alerted to the possible presence of drugs in the stroller. “Fentanyl can kill you,” DEA Deputy Administrator Jack Riley advised in a statement sent to law enforcement officers in 2015. “Fentanyl is being sold as heroin in virtually every corner of our country. It’s produced clandestinely in Mexico, and (also) comes directly from China. It is 40 to 50 times stronger than street-level heroin. A very small amount ingested, or absorbed through your skin, can kill you,” he said.

Breitbart Texas reported in late January that a previously deported Italian mobster was caught trying to sneak into the country through Nogales. Salvatore Marciante had been previously deported after serving time in federal prison for drug trafficking and violent assaults. The Italian drug Mafia mobster had been a permanent legal resident living in New York until he was convicted in 1995 and lost his legal status. After he had served time, officials deported him back to Italy.