Police in New York City expressed frustration about not being able to stop naked panhandlers from harassing the public because most of them are illegal aliens. Their status makes it difficult to enforce tickets because of Mayor de Blasio’s sanctuary city policies.

The city established “Designated Activity Zones” (DAZ) in 2016 to provide a place for “costumed characters” a place to work for tips. Some of these panhandlers, called desnudas, are nude women wearing painted on costumes. Law enforcement officers frequently decline to ticket panhandling violations because most of them are illegal aliens, the Daily Mail reported.

A proposal to license desnudas and other street merchants failed because “most of the panhandlers are illegal immigrants and they wouldn’t register anyway,” a law enforcement source told the New York Post. “Besides, the administration at City Hall isn’t interested in going after illegals in this capacity.”

The Post reported that during the first twelve months following the DAZs’ creation, police officers only issued about one ticket summons per day. This despite what they claim to be “flagrant flouting” of the zone rules.

City officials dispute the alleged lack of enforcement of the DAZs. Police spokesman Peter Donald responded to a Post email inquiry, writing, “[T]he enforcement data tells a different story. There have been a number of arrests and hundreds of summons issued to costume characters over the past year in Times Square.” 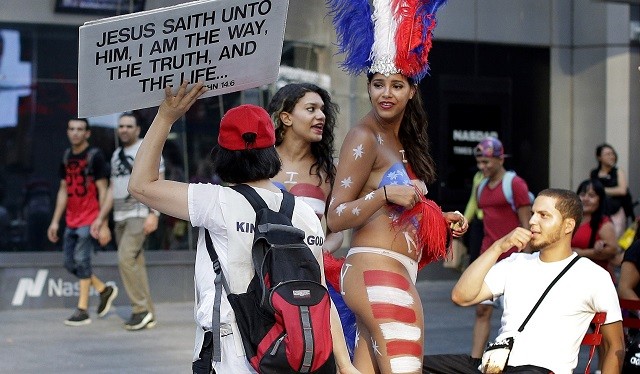 City officials created the DAZs after media outlets “ugly incidents” that included a “Spider-Man” that refused to release a 13-year-old child until the father paid a $10 tip, and a “Batman” who grabbed a $50 bill from the wallet of an Irish tourist. The City created a total of eight zones.

Times Square Alliance President Tim Tompkins expressed his frustration with the panhandlers and the lack of enforcement. 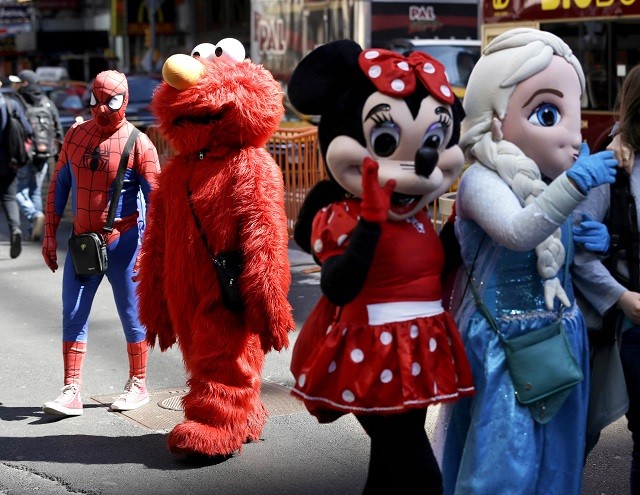 Other incidents include costumed characters crashing photos and demanding tips. “Suddenly, there’s three Minnies in your picture,” he explained. “And a Batman, and a Spider-Man. And they all want cash. And they’re all outside the zone.”

He said when the panhandlers see the police, they rush back into the zone boundaries. “It’s a total f—ing scam, and it happens thousands of times a week,” he exclaimed. “It’s those same three f—ing Minnie Mouses.”

Editor’s Notes: All photos in this story are file photos and are not accusations of wrongdoing by panhandlers.