Osteen and his wife, Victoria, are pastors of the non-denominational congregation located in the former Compaq Center. Lakewood Church is situated roughly six miles from downtown Houston and is on Highway 59 which has arteries to and from the Interstate 610 Loop, Interstate 45, and Highway 288.

The Compaq Center was home to the Houston Rockets and hosted other events prior to the campus being acquired by Osteen’s church.

After the tropical storm and hurricane rocked the city on Friday, Osteen tweeted, “Victoria & I are praying for everyone affected by Hurricane Harvey. Please join us as we pray for the safety of our Texas friends & family.”

Victoria & I are praying for everyone affected by Hurricane Harvey. Please join us as we pray for the safety of our Texas friends & family.

The response to Osteen’s request to have others join he and his wife in prayer for the flood and hurricane victims was met with instant ridicule and criticism on Twitter. Here are some responses in Twitter Moments linked here.

Even another clergyman, Pastor Greg Locke, tweeted, “Joel Osteen, as a Pastor you have a huge obligation to show the love of Christ at this very moment.”

Joel Osteen, as a Pastor you have a huge obligation to show the love of Christ at this very moment.
OPEN THE DOORS. #HoustonStrong

Here is a screenshot of a few other responses to Osteen’s Tweet requesting that others join him and his wife in prayer. 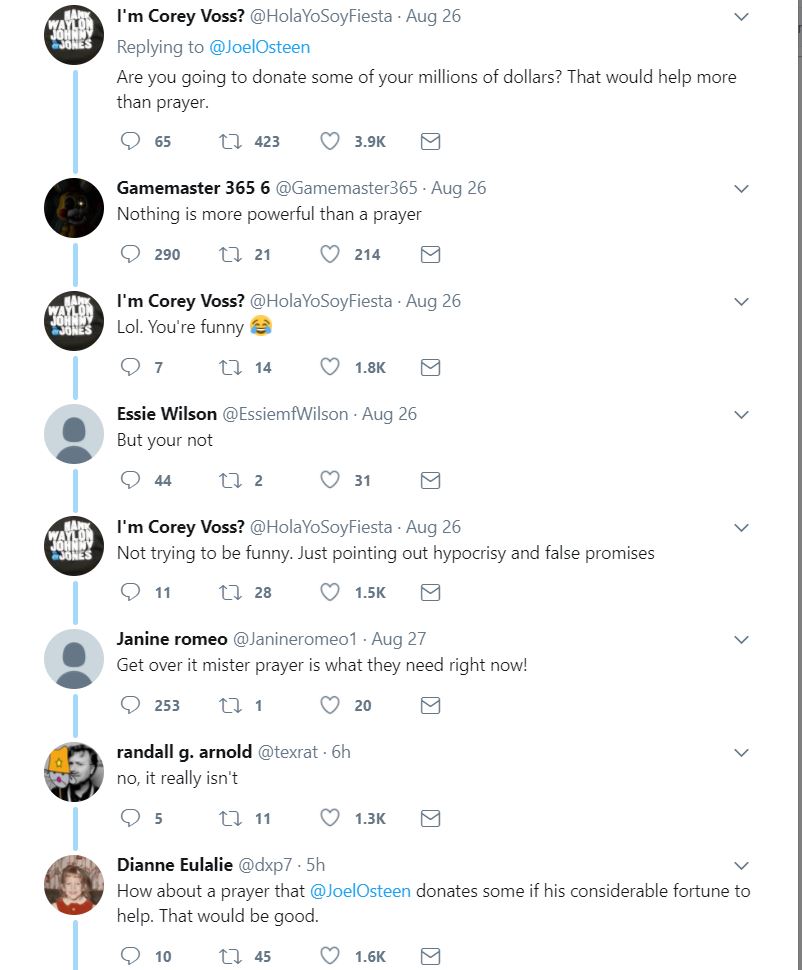 .@JoelOsteen I’m calling you out. Your church is not Flooding let people in! It’s GODS HOUSE REMEMBER?
https://t.co/ga62Jddhdo

The Twitter video sensation told viewers he was from the South and that those in New York, Utah, the East Coast, and the West Coast, and other places in the country did not need to tell him what to say about the church closing its doors. He said people in Houston were dying and needed a place to stay. “This is about southern folks right now!”

Osteen tweeted earlier Monday afternoon, “Our hearts break as we see the damage and destruction in our city. Please join us in helping Houston recover.”

Our hearts break as we see the damage and destruction in our city. Please join us in helping Houston recover. Visit https://t.co/jXMX5VB3qS pic.twitter.com/00HtzOmeQL

The tweet contains a “Hurricane Relief Update,” and a link with a message that stated:

We want to let you know that our hearts are with each of you and your families during this difficult time. We are praying for you and we are praying for our city, and for all of those affected by the devastating flooding and rains caused by Hurricane Harvey. We love you and we love this city. And we want to help.

Over the last couple of days, as the enormity of this storm was being realized, we have been working to organize relief efforts for the Houston area with our friend Franklin Graham and the disaster relief organization that he oversees, Samaritan’s Purse. Samaritan’s Purse has been, since it’s inception, organized to respond to situations just like Hurricane Harvey, and we are grateful to be able to partner with them to provide assistance to the Houston area.

We know the need is great. That much is clear. We do not yet know all the ways we can help. However if you would like to register to volunteer with us, please do so by clicking the link below. Or, if you would like to donate to our relief efforts, please do so here in this page. We are working just as fast as we can on this and will update you with more information as it becomes available.

In the meantime, know that our prayers for strength and comfort for each of you will continue, as well as our prayers for God’s help as we navigate the upcoming days and months together.

We love you. And we are praying. Together, we will make it through this difficult time.

A Tweet by the pastor eleven hours earlier said, “Jesus promises us peace that passes understanding. That’s peace when it doesn’t make sense.”

On Sunday the Houston pastor Tweeted, “God’s got this.”

There’s a simple phrase you have to get down in your spirit, “God’s got this.”

Twitter users took photos of the building calling out Osteen and the church showing that it was not flooded, nor was the area around the church apparently affected.

Oh, thank you, sweet, merciful lord for sparing Joel Osteen’s 16,000 seat Lakewood Church. Now, if only it had opened its doors to the needy pic.twitter.com/4lzn1MsMcW

@JoelOsteen howdy neighbor! How come you aren’t letting your neighbors take shelter from the storm? Looks pretty unflooded to me pic.twitter.com/rK6iZWGLpD

A video posted by a self-proclaimed fan of Osteen’s reveals the roadways in front of the church are open and not flooded. Twitter user Sean Salisbury posted the video on Monday evening at 6:40 CDT.

Just offer shelter and a dry place for those who need you and want to know you care. .@JoelOsteen those who can’t get here still need you! pic.twitter.com/MdHAHWGprR

Those on Twitter also tweeted what are supposed to be photos of Joel Osteen’s mansion in Houston’s River Oaks, a few miles away.

Breitbart Texas has provided continual coverage of the aftermath of the tropical storm and the Category 1-4 hurricane that has spread havoc in Houston and around coastal Texas. Tens of thousands have been displaced from their homes in the Bayou City and at least eight people have died.

Editor’s Note: This article has been updated with additonal information.