Prosecutors in Montgomery County, Maryland, charged a known MS-13 leader for ordering the beating of a 15-year-old girl with a baseball bat who had been forced into prostitution. Two other Salvadoran nationals are also named in the case.

Law enforcement officials said that Miguel Angel “Noctorno” Ayala-Rivera, a 24-year-old MS-13 member who illegally entered the U.S. from El Salvador, ordered his fellow gang members to beat a 15-year-old girl with a baseball bat. “Noctorno” reportedly pimped out the victim along with other underage girls, the Daily Mail reported from Montgomery County court records.

According to a law enforcement source, “Nocturno” and his two fellow MS-13 members dragged the teenage girl into the backyard of their Kensington, Maryland, hideout. “Noctorno” and four other men took turns beating her with a baseball bat, the news outlet reported. She received a total of 28 blows on various locations on her body. Records indicate she suffered an “indented” buttocks, discolored arms and legs, and visible bleeding from her neck-down.

Court records state that a second source told police that “Noctorno” ordered her beating because she was “not doing a good job as an MS-13 prostitute.”

Police uncovered the beating of the teenage sex trafficking victim while investigating the gang members following their arrest for an alleged series of armed robberies in Maryland and Washington, DC.  They reportedly stormed into numerous check cashing stores armed with handguns and would demand cash. Records indicate the men would often conceal their faces.

Police recovered a modified TEC-9 pistol in the front seat of a van the men were driving following an alleged robbery in Silver Spring, Maryland. The arrest followed a high-speed pursuit where one of the suspects died after being struck by a police car as he attempted to flee on foot. 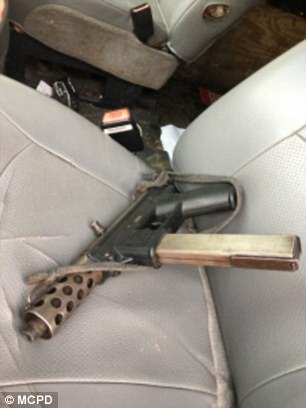 Breitbart Texas reached out to U.S. Immigration and Customs Enforcement officials for more information about the suspects’ immigration history. No response was immediately available.

Texas Governor Greg Abbott and Department of Public Safety Director Steve McCraw also attributed the increase in MS-13 gang violence in Texas to the influx of Unaccompanied Alien Children, Breitbart Texas reported. Their comments came during the announcement of a gang task force operation in Houston that Abbott said would make the city “hostile territory for gangs.”