Border Patrol agents in Eagle Pass, Texas, received an Amber Alert from authorities in Coahuila, Mexico, on May 31. The alert stated that the “non-custodial father” of a Honduran 3-year-old boy had taken her and that she could be in danger, according to information obtained by Breitbart Texas from U.S. Customs and Border Protection (CBP) officials. 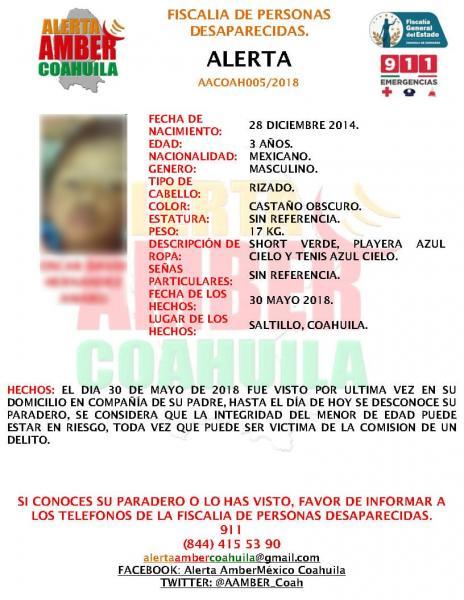 Amber Alert for Honduran 3-year-old who was allegedly kidnapped in Mexico by his non-custodial father.

The Texas National Guard assigned Army Sergeant Javier Olmos to an electronic monitoring station. The station monitors cameras and other means of electronic surveillance near the Eagle Pass Port of Entry, officials stated.

Sgt. Olmos spotted a man and a small child who had just crossed the Rio Grande River not far from the port of entry. He directed Border Patrol agents to the scene. The agents quickly made contact with the illegal immigrant and took them into custody.

“I started to scan the area with the camera system and saw them walking across the golf course,” Olmos explained. “At the time, I didn’t know they were the subjects in the Amber Alert. We got the news that this was the child in the alert after they were processed.”

Agents returned the little boy to Mexican Consular officials who took him back to his mother. Officials processed the 28-year-old father according to CBP guidelines.

Sgt. Olmos is a 10-year veteran of the Texas Army National Guard. In civilian life, he works as a police officer in El Paso.

The recovery of the Amber Alert toddler was Sgt. Olmos’ second score of the morning. Earlier on Thursday, Sgt. Olmos alerted Border Patrol agents to the crossing of another illegal immigrant. Agents arrested the man and, during a background screening, learned the Honduran man was a previously deported sex offender.

Immigration officers deported the Honduran man in 2011 following his conviction in Utah for aggravated sexual abuse of a child. Olmos spotted the man crossing the border utilizing camera surveillance equipment and directed agents to his location.

National Guardsmen like Sgt. Olmos have assisted Border Patrol agents in apprehending more than 400 illegal immigrants after they crossed the border from Mexico. The guardsmen are not performing direct law enforcement work but are proving to be effective in border monitoring and other duties outside of directly enforcing the law.