“The most obvious and direct cause of the flood of children from Central America is the 2008 human trafficking law that ended the rapid deportation of unaccompanied minors who come illegally from countries other than Mexico and Canada,” the Washington Post wrote in July 2014. “The law, which cleared both houses of Congress by unanimous consent and was signed by George W. Bush in his final days in office, was bipartisan and well intentioned — but it was exploited by the very traffickers it was meant to target, who encouraged this huge emigration of children from Central America.”

The Trump Administration could not agree more with the Post’s article.

“Once again it is Congress’s job to change the law. We’re calling on them to do exactly that,” White House Press Secretary Sarah Sanders told reporters on Monday in response to criticism of President Trump’s policies regarding families and minors at the border by former First Lady Laura Bush, Breitbart News’ John Nolte reported.

“And, frankly, this law was actually signed into effect in 2008 under her husband’s leadership, not under this administration,” she added. “We’re not the one’s responsible for creating this problem; we’ve inherited it. But we’re actually the first administration stepping up and trying to fix it.”

The manner in which Presidents Obama and Trump handled what became an overwhelming crisis stands in sharp contrast.

Shortly before President Obama’s re-election in 2012, he introduced a program that allowed some young people who were brought to the U.S. illegally by their parents to remain in the U.S. without fear of removal. The administration action became known as the Deferred Action Against Childhood Arrivals (DACA) program. The impact on the southwest border was immediate as scores of families and unaccompanied minors began to move to the southern border with hopes of being included in similar programs in the future. 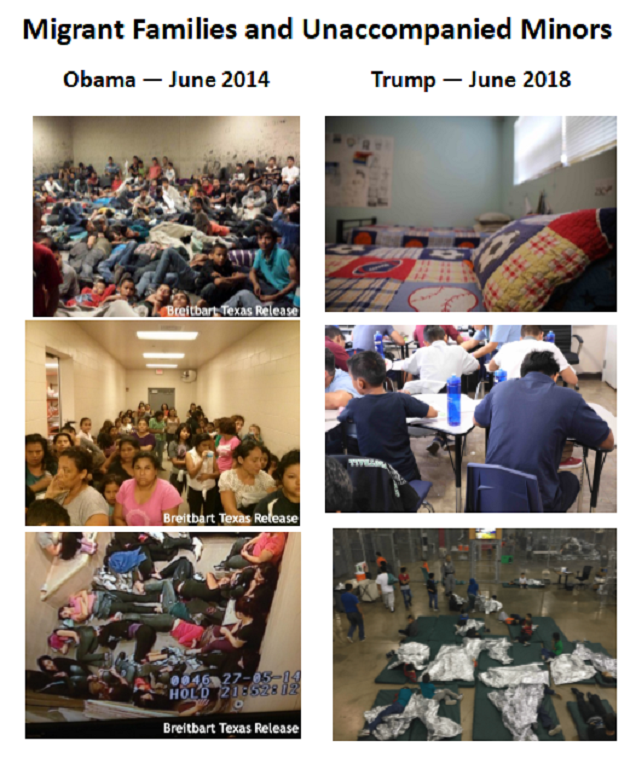 The U.S. Customs and Border Protection’s Southwest Border Migration Reports began to show a sharp rise in the apprehensions of migrants. This stood in sharp contrast to the years of decline in border apprehensions from 2000 to 2012.

A surge of unaccompanied minors and families began to cross the U.S.-Mexico Border, mostly in Texas, following the Obama Administration’s adoption of catch and release procedures.

See all 30 images published by Brandon Darby via Breitbart Texas in June 2014:

This month, U.S. Department of Health and Human Services released video of the Southwest Key immigrant detention facility used to house children whose parents are being prosecuted for immigration violations.

During a debate on the Senate floor in July 2014, Senators agreed the law signed by George W. Bush appeared to be the cause of the wave of migrant children and families, the Post article continued. Senator Jeff Flake (R-AZ) called it “the root of it or the main part of it,” while Senator John Cornyn said, “We need to change that 2008 law” because it creates a perception that “these immigrants who come across will not be detained.”