Mexico’s immigration authorities issued a warning about individuals in Guatemala who are building Molotov cocktails and other makeshift incendiary devices to be used against federal police officers guarding their southern border. The alert follows an incident where a group of migrants in what’s being dubbed the second caravan threw rocks at officials at the Guatemala-Mexico Border and tried to break through international barriers. Mexican law enforcement confirmed that some of the protesters in the clash carried firearms.

The warning was issued by Mexico’s National Migration Institute (INM). The agency claimed it learned of various individuals in Tecun Uman, Guatemala, were building Molotov cocktails with the intent of using them against Mexican border authorities. In a public statement, INM asked the Guatemalan government to intervene, adding the violent actions were those of “criminals and not of a vulnerable migrant population.”

The group in Guatemala appears to be part of another caravan of migrants trying to make their way into Mexico and then the United States. As Breitbart News reported, that group clashed violently with authorities at one of the border fences in Guatemala as they tried to make their way into Mexico. Ten police officers sustained various injuries and one Honduran national died, Mexico’s Secretariat of the interior confirmed in a statement. 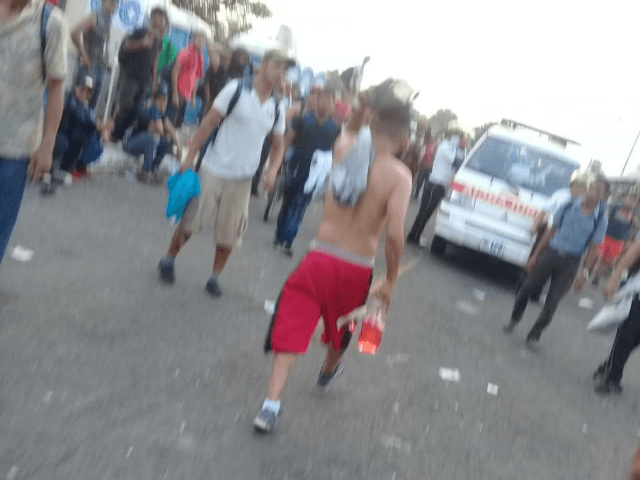 Due to the violent nature of the protest, authorities in both Mexico and Guatemala are working to identify the individuals who are believed behind the clashes and those preparing the improvised incendiary devices, said Mexico’s Secretary of the Interior Alfredo Navarrete Prida. The official also confirmed that in the most recent clash, some of the suspects carried firearms and Molotov cocktails.

The group in Guatemala is separate from the migrant caravan, which is currently in Mexico and is making its way to the United States. Mexico’s government asked the members of the northern caravan to follow immigration law so they could receive temporary employment, state-funded healthcare, and education. However, the group turned down the offers and is preparing to continue north. From that caravan, 422 migrants requested assistance from Mexican authorities to return home.

Tony Aranda and “J.M. Martinez” from the Cartel Chronicles project contributed to this report.