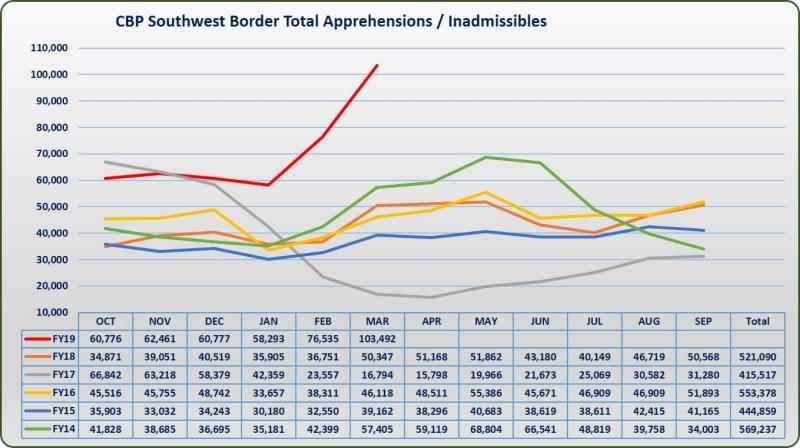 This chart from CBP depicts the total number of migrants apprehended by Border Patrol agents or determined to be non-admissible by CBP officers.

During a briefing hosted by CBP Office of Public Affairs, United States Border Patrol Chief Law Enforcement Operations Directorate Brian Hastings told reporters that during March, Border Patrol agents apprehended 92,607 migrants. This is up from nearly 66,884 in February — a 35 percent increase. When compared to the first six months of Fiscal Year 2018, FY2019 has seen a greater than 100 percent increase, he stated. So far this year, Border Patrol agents apprehended more migrants than in all of FY 2017.

Of the more than 92,000 migrants apprehended after illegally crossing the border, 33,000 were Family Unit Aliens, 8,900 were Unaccompanied Alien Children, and 30,000 were single adults.

Hastings reported that Family Unit Alien apprehensions for this fiscal year are up 375 percent over the previous year’s numbers.

The record number of migrant family apprehensions forced Border Patrol leaders to divert 40 percent of agents from their national border security duties and place them on humanitarian duties including processing, transportation, medical screening, and hospital watch, Hastings stated. Currently, Border Patrol agents are referring 63 migrants per day to medical facilities at a tremendous cost to the agency and taxpayers. Hastings said that Border Patrol has spent $4 million on “hospital watch” so far this year. This cost is for the agents who have to stay with migrants who are in the hospital due to illness or injury. This is on pace to exceed $12 million for this fiscal year.

He predicted that the agency will make more than 31,000 hospital referrals in FY 2019 compared to about 2,000 for all of last year.

In total, Hastings predicted that the Border Patrol budget will be depleted by more than $90 million for cost related to the humanitarian services created by the current crisis.

Due to overcrowding, Border Patrol officials directly began releasing non-criminal migrants on their own recognizance to NGOs or to bus stations. Since the new policy began on March 19, Hastings said that more than 11,000 have been released. All migrants undergo a criminal background and medical check prior to being released.

These large groups represent a security risk for the agents, he said, as the agents are heavily outnumbered when they encounter the group. Secondly, he said the large groups tie up Border Patrol agents who must be pulled from front-line duties to provide initial screening, transportation, and processing of the migrant group.

The director of operations said the criminal organizations in Mexico exploit this as an opportunity to move drugs and other high-value human cargo across the border while agents are tied up with the large groups.

On average, Border Patrol agents apprehended more than 3,000 migrants per day during the month of March.