Federal officials called a cartel-connected smuggling tunnel under the Arizona-Mexico border “the most sophisticated tunnel in U.S. history.” The 1,300-foot structure stretched from a neighborhood in San Luis, Mexico, to its destination in San Luis, Arizona. Officials detected the tunnel prior to its completion, officials said.

“This appears to be the most sophisticated tunnel in U.S. history, and certainly the most sophisticated I’ve seen in my career,” Carl E Landrum, acting chief patrol agent, Yuma Sector, said in a written statement provided to Breitbart Texas by U.S. Immigration and Customs Enforcement officials. “We will continue to work closely with our partners – Homeland Security Investigations and state and local agencies to provide the best national security possible.” 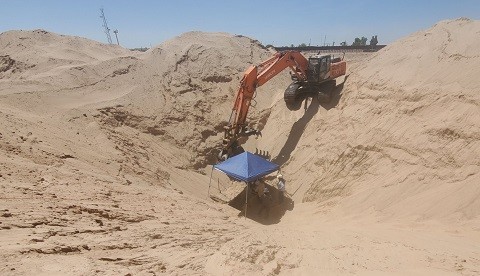 Agents deployed a camera 25 feet into the ground where they observed a gap that confirmed the tunnel’s existence.

Officials brought in heavy equipment to excavate. This led to what officials called the “most sophisticated tunnel in U.S. history.” The 1,300-foot tunnel contained extensive reinforcement, a ventilation system, water lines, electrical wiring, and a rail system for moving drugs and/or human cargo through. The 25-foot deep tunnel measured three feet wide and four feet high.

The termination on the U.S. side had not yet been completed.

“Homeland Security Investigations and our esteemed law enforcement partners swiftly and effectively worked together to uncover and dismantle a cross-border tunnel for smuggling purposes into the United States,” said Scott Brown, special agent in charge of HSI Phoenix. “Despite the international pandemic, HSI and our law enforcement colleagues remain resilient and committed to pursue dangerous criminal trans-border smuggling activities along the southwest border.”

Breitbart Texas reached out to ICE and CBP officials for additional information regarding the tunnel operation. An immediate response was not available.