A coordinated effort between a U.S. Customs and Border Protection Air and Marine Operations (AMO) aircrew and U.S. Border Patrol agents led to the seizure of “thousands of pounds” of suspected methamphetamine.

An AMO Multi-Role Enforcement Aircraft aircrew from the San Diego Air and Marine Branch patrolling the California coastline near Santa Barbara during the early morning hours of August 19 observed a “super panga” with four people on board. As the boat approached the beach, the AMO aircrew relayed the information to U.S. Border Patrol agents, according to a preliminary statement from U.S. Customs and Border Protection officials. 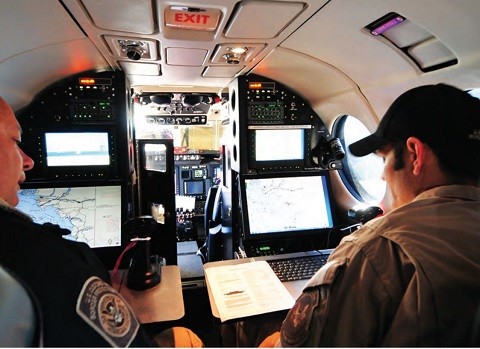 Breitbart Texas reached out to San Diego Sector CBP officials for more details about the meth-smuggling incident. Officials responded saying that the information on the weight and value of the drugs seized was still under investigation. They could not provide any additional information at this time.

“The citizens of this country can rest assured that CBP is ever vigilant in their duty to protect the American people and stand ready to combat those criminals that would deliver this poison to our streets, saving American lives,” San Diego Air and Marine Branch Timothy Sutherland Director said in the prepared statement.

“The SDAMB has already made a big impact in the illicit drugs entering via California this fiscal year,” San Diego Air and Marine Branch officials stated. “In FY20 year to date through July 31, SDAMB has contributed to the seizure of 480 lbs. of cocaine, 199,307 lbs. of marijuana, 191 lbs. fentanyl, 114 lbs. of heroin, and 2,948 lbs. of methamphetamine. SDAMB seized, 80 weapons, 81 vehicles/vessels, and contributed to the apprehension of 2,618 individuals.”

Breitbart Texas reports extensively on the efforts of the Air and Marine Operations units along the U.S. Mexico border and in off-shore drug interdictions.

Just three weeks ago, an AMO aircrew from the San Diego Sector interdicted another shipment of methamphetamine headed to the California coast, Breitbart Texas reported.