El Centro Sector Border Patrol agents arrested a pair of human smugglers at an interior immigration checkpoint in California. During a search of their vehicle, agents found a pistol.

El Centro Sector agents assigned to the Highway 111 checkpoint observed a silver BMW approaching for inspection. Agents noted a male driver and a female passenger, according to information obtained from Border Patrol officials. 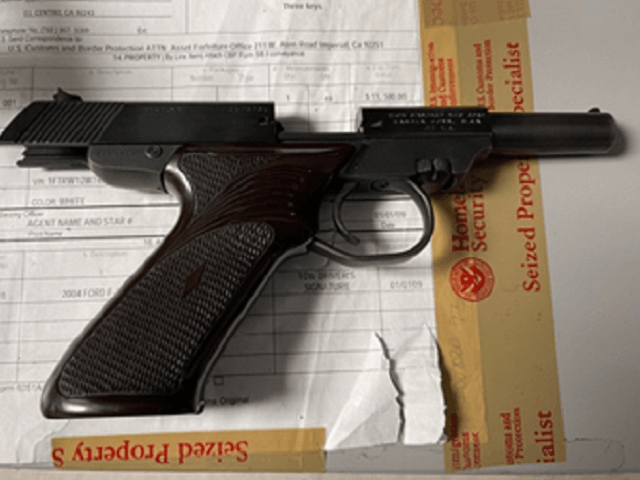 Agents requested permission to inspected the trunk of the BMW, officials stated. When they opened the trunk, the agents found two men laying inside the locked compartment.

The agents conducted an immigration interview and identified the men as Mexican nationals illegally present in the U.S.

During a search of the BMW’s interior, agents also found an unregistered .22-caliber pistol with six rounds of ammunition.

Officials stated the agents arrested the driver, a Lawfully Admitted Permanent Resident, and the female passenger, a U.S. citizen.

The illegal immigrants will be repatriated to Mexico, officials stated.

Under Title 42 Coronavirus protection protocols put in place by the Centers for Disease Control and Prevention, nearly all migrants apprehended near the border are expelled to Mexico within two hours of their arrest in the United States, CBP officials previously told Breitbart Texas.

El Centro Sector Border Patrol officials stated that firearms-related incidents are up by 250 percent in the first few months of Fiscal Year 2021 which began on October 1, 2020.

The driver and passenger were processed for charges related to 8 USA 1324 — Alien Smuggling.

During the first two months of FY21, El Centro Sector agents arrested 7,202 illegal immigrants while or shortly after they illegally crossed the border from Mexico into California, according to information published by U.S. Customs and Border Protection.