The Electric Reliability Council of Texas (ERCOT) called for Texans to conserve electricity on Monday afternoon.  For the second time this year, the council blamed “a significant number of forced generation outages” and record demand for the “tight grid conditions” that are expected to last until Friday, June 18.

“We will be conducting a thorough analysis with generation owners to determine why so many units are out of service,” ERCOT Vice President of Grid Planning and Operations Woody Rickerson said in a written statement. “This is unusual for this early in the summer season.”

ERCOT’s chart shows the demand and capacity lines nearly colliding at about 2 p.m. on Monday. At that point, demand began to fall and capacity remained stable. 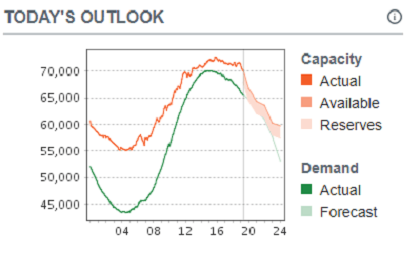 Texas Sports Reporter Matt Stepp called out ERCOT for not being able to provide reliable electricity in both the cold of winter and the heat of summer.

ERCOT in February “we shut down because it was just too cold, our grid is built to handle the Texas Summer”
ERCOT in June “ohh my bad, its also too hot”

In February, millions of Texans lost electrical power for days and record cold temperatures blanketed the Lone Star State, Breitbart Texas reported. Now, as temperatures approached or exceeded the century mark across most of the state, ERCOT’s grid does not appear to be up to the task.

ERCOT’s Warren Lasher, senior director of systems planning did not appear to have an explanation for this week’s anticipated shortages in power production.

“I don’t have any potential reasons [for the plant outages] that I can share at this time,” Lasher told the Texas Tribune. “It is not consistent with fleet performance that we have seen over the last few summers.”

He quickly shifted the blame to power producers, saying, “We operate the grid with the resources that we have available. It’s the responsibility of the generators to make sure their plants are available when demand is high.”

Between now and Friday, ERCOT officials recommend the following:

Consumers can find more information about the demand and supply factors on the council’s website, www.ercot.com.