Drought monitoring officials report nearly 98 percent of the western U.S. is facing some level of drought. The record drought will impact the cattle industry at all levels.

As of June 16, more than 26 percent of the West is experiencing exceptional drought — the most intense level, according to a report from U.S. Drought Monitor published by AGWeb.com. Nearly 96 percent of the West is reporting some level of drought conditions. The previous high for this type of dryness during the past 20 years hit only 12 percent. 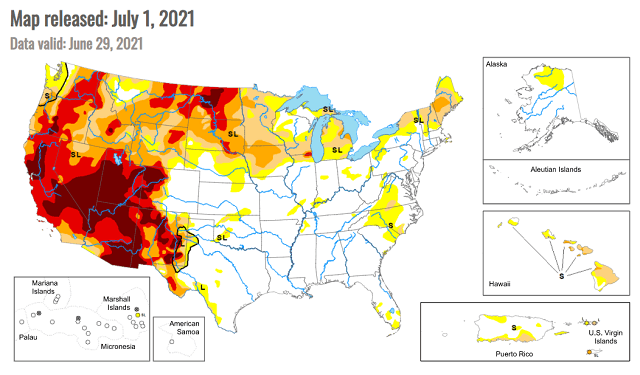 The drought is impacting cattle ranchers from California to North Dakota, the article states.

“We’re getting late along in the growing season,” Allen Schlag, National Weather Service hydrologist in Bismarck, said in mid-June. “We’ve missed out on a good portion of grass production and there’s no making it up. A lot of grasses have headed-out and, once that happens, it doesn’t get any taller. From that standpoint, it does not matter one bit how wet we are between now and July 4.”

Pasture conditions since May 1 are at their worst levels since 1995, a U.S. Pasture and Rangeland Condition report states. The group says conditions should continue to worsen over the next through the end of July.

Cattle producers are looking into culling their herds as grass becomes scarce, the article states. The drought could rival the 2010-2014 period where cattle ranchers reduced beef cow herds by 6.3 percent — a reduction of more than two million cows.

The herd in Texas, the nation’s largest cattle producer, fell from 5.03 million in 2011 to 4.37 million the following year. Since then, the number of cows in Texas slowly climbed back to only 4.7 million, the report states.

Andrew McGibbon’s 90,000-acre ranch in southern Arizona reports the drought is not only drying up pastureland and evaporating water troughs, but it is also killing trees, according to National Geographic.

“We’re having the death of trees like I’ve never seen in my lifetime,” McGibbons said. “Thousands of trees are dying.” He said this includes species that have adapted to Arizona’s desert landscape, including oak and mesquite.

According to the U.S. Department of Agriculture, cattle slaughter rates are up from last year. Officials said that could also be related to an inventory catch-up from last year’s COVID-19 pandemic.

“Drought is always this recurring challenge for ranching,” University of California, Davis, rangeland management expert Leslie Roche told National Geographic. “In California, [ranchers] depend on rainfed systems. Being dependent on such a highly climate-sensitive resource makes them vulnerable.”

Technology is helping ranchers adapt to the increasing drought conditions. The implementation of soil-moisture sensors allows ranchers to move cattle to the most optimal grazing location, the report states. Researchers are also reported to be selectively breeding cattle to better withstand the heat and be able to survive in drought-stricken conditions.