MCALLEN, Texas — More than one hundred visitors and residents in the Texas border city of McAllen attended a rally and march to the border wall to shed light on the dangers of child trafficking. One guest speaker at the event, Karla Jacinto, recounted her story as a victim of child trafficking at the age of 12.

Retired ICE-Homeland Security Investigations Agent Victor Avila, who survived a brutal cartel attack in Mexico, also spoke to the crowd about child trafficking cases he investigated during his career. 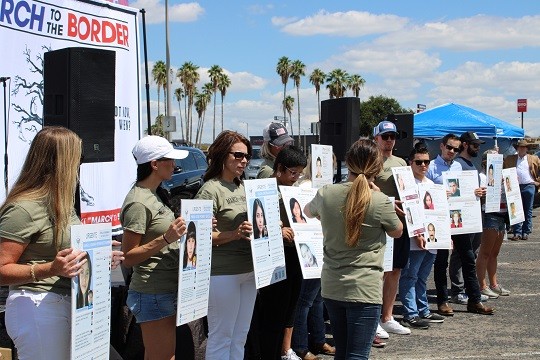 More than 100 people gather at a March to the Border rally in McAllen, Texas, to learn about child trafficking. (Photo: Randy Clark/Breitbart Texas)

The event, attended by more than 100 residents and visitors to McAllen, opened with an invocation by Dr. Nilsa Alvarez who recounted the open cases of missing and exploited migrants. Dr. Alvarez asked the crowd to pray for those victims and their safe return to desperate family members. The event culminated with a march to the border wall gate.

Karla Jacinto shared intimate details of being a victim of child trafficking after becoming enamored with a man who later forced her into prostitution in Mexico at the age of 12.  She says a dysfunctional home environment that included physical and sexual abuse made her an easy target for exploitation.

She said the man she initially thought she loved waited three months to finally reveal his plans for her. The man, she says, forced her into prostitution and at one time forced her to work as a prostitute even while she was pregnant. After delivering her child, she says the baby was taken from her.

She says she was faced with being forced to cross illegally into the United States by her captor on multiple occasions. Luckily, she avoided being trafficked across the border to be exploited further. She was ultimately rescued by a person she credits with helping her to find the strength and recognize her self-worth as a human being. She now advocates on behalf of victims and shares her story to bring awareness to the issue.

Victor Avila, a retired ICE investigator, survived an attack by  Los Zetas Cartel gunmen in Mexico in 2011. Avila was shot 3 times in the attack that killed his partner, HSI investigator Jaime Zapata. Avila told the attendees of the march about the process traffickers use to exploit children.

“There is force, fraud, and coercion involved in human trafficking, sometimes it’s one, others it’s all three” Avila explained.

The former federal agent says in one case he investigated, human traffickers killed and disposed of a newborn child at a brothel in New York by encasing the baby in concrete. The body was kept where the victims could see it.

“Think about how that affects the victims, the breakdown of the psyche, the mental, physical, emotional state of them,” Avila stated. “People sometimes think victims are shackled, no, they are mentally coerced.”

The event was coordinated by Landon Starbuck, an artist and advocate for ending child trafficking and exploitation. Starbuck told Breitbart Texas she is concerned about the lack of advocacy for the thousands of unaccompanied migrant children crossing our borders.