Texas National Guardsmen and Border Patrol agents in the Del Rio Sector spent Father’s Day apprehending and processing a group of more than 400 migrants. The gigantic group of migrants crossing near Normandy, Texas, continued to grow in size on Sunday morning.

Breitbart Texas observed a large migrant group being apprehended and processed in Normandy on Sunday morning — about 20 miles north of Eagle Pass, Texas. The group continued to grow in size to more than 400 migrants. 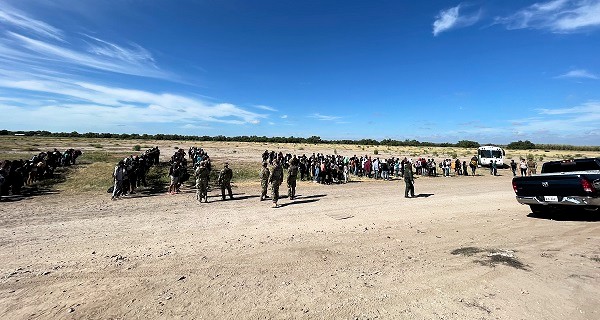 Breitbart observed the group being detained by soldiers with the Texas National Guard and a local sheriff’s deputy while a single Border Patrol agent began separating the migrants by nationality. Photos show only a single bus available to begin transportation.

One of the groups, apprehended near Normandy, Texas, approached 500 migrants in size.

In May, Del Rio Sector agents apprehended 44,388 or the 222,656 migrants taken into custody along the southwest border with Mexico, according to the Southwest Land Border Encounters report released last week.