According to police, officers responded to a domestic disturbance at a home in Lincoln at 2 PM. Lincoln is also home to the University of Nebraska. Joseph was arrested and taken to Lancaster County Jail, according to a police report.

On Wed, Nov 30 @ 1:54pm LPD was dispatched to a home near S 34th & Tree Line Drive on a domestic disturbance. Upon concluding the investigation, Robert ‘Mickey’ Joseph, age 54 of Lincoln, was arrested for Strangulation and 3rd Degree Domestic Assault. He was lodged in jail. pic.twitter.com/aiyzvVi8it

Nebraska Athletic Director Trev Alberts released a statement in which he made it known that Joseph was being placed on “administrative leave.”

“I was made aware of the charges against Coach Joseph and given the nature of the allegations and based on university police he has been placed on administrative leave,” Alberts said. “We will have no additional comment at this time.” 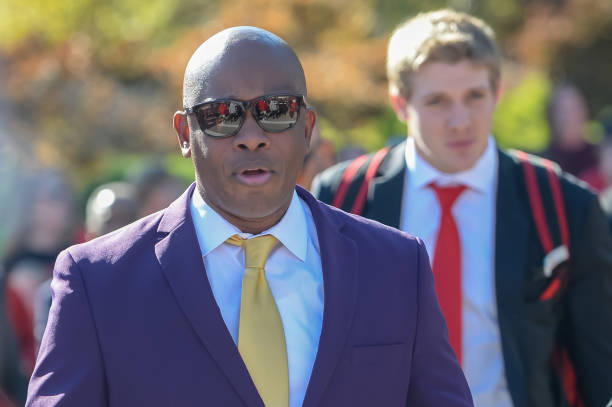 Interim head coach Mickey Joseph of the Nebraska Cornhuskers leads the team on the walk to the stadium before the game against the Illinois Fighting Illini at Memorial Stadium on October 29, 2022, in Lincoln, Nebraska. (Steven Branscombe/Getty Images)

Joseph is a Nebraska alum and served as the team’s wide receivers coach before being given the interim tag following the firing of Scott Frost. Nebraska announced this week that former Baylor Bears and Carolina Panthers coach Matt Rhule would become the new head coach.

While Joseph will clearly not continue as head coach, there was a possibility that he could have joined Rhule’s staff in his former capacity as wide receivers coach. However, it is unclear, especially in light of his arrest, whether Joseph will remain at Nebraska in any capacity.