Indian H-1B visa workers are pressuring Illinois Democrat Sen. Dick Durbin to quit his opposition to a bill that gives fast-track green cards and citizenship to Indians who agree to take jobs from American college graduates.

The H-1B visa workers in the United States are not citizens or even green card holders, but they are still protesting Durbin because he blocked GOP Sen. Mike Lee’s green card giveaway bill for Indians.

On September 26, Lee tried to pass the S.386 bill through the Senate via the no-vote Unanimous Consent process. Durbin blocked the bill, and no GOP senator publicly opposes the legislation, which would allow companies to pay imported Indian graduates with 100,000 green cards per year. The bill is backed by a variety of investors and technology companies that profit from the U.S.-India Outsourcing Economy.

Many Indians have been imported to take high-tech jobs throughout Durbin’s home state of Illinois. On October 10, roughly 600 of these imported workers turned out to demand passage of Lee’s green card giveaway bill, which is dubbed by advocates the “Fairness for High Skilled Immigrants Act.” Advocates claimed a turnout of 5,000, but the video shows roughly 600 marchers:

This is truly historical.The 5000 of us who showed up today represents the voice of over a million high-skilled immigrants who are stuck in decades long backlog. The only relief that has any chance of passing is #S386 #HR1044.We are confident that our Senator will hear our appeal pic.twitter.com/1N06CUyRqt

The Chicago march was protested by a loose alliance of Americans who want to protect their careers and by non-Indian migrants who would be pushed to the back of the ten-year green card line by Lee’s bill.

On the right side of the Chicago scene were corporate America Indians screaming for monopolization of green cards – on the left side were Americans standing in support of Senator Durbin and fairness for the ROW. pic.twitter.com/ukMN5YCjXv

The Indian workers also attended an October 13 protest at a meeting of Democratic politicians in Illinois. More than 100 of the visa workers stood at the entrance to demand fast-track green cards. The leading lobby for the visa workers, Immigration Voice, posted a video of the protest.

IT IS STILL GOING ON! We are told there are more than 300 people who spontaneously gathered there. Live-streams can be taxing on the battery, so here is a livestream from a different phone, outside of a Democratic Party breakfast where Senator Dick Durbin is the keynote speaker.

These people are just asking the Senator to recognize them as equal to any other human being in human being waiting for an employment based Green card.

However, because of his hate towards Indian immigrants and their families, Senator Durbin insists on making sure they are sub-human by denying them Green Card equally & is the only Senator opposing the bi-partisan Fairness for High Skilled Immigrants Act.

Illinois has a large population of Indian visa workers because U.S. investors and Indian companies use a variety of visa programs to keep at least 600,000 Indian graduate workers in the U.S. labor market. These workers perform jobs held by American graduates and also transfer additional white-collar jobs back to India-based offices.

Indian managers recruit many of the Indians in this U.S.-Indian Outsourcing Economy for well-paid jobs at high-status firms, such as Cisco, Google, and Intel. But most of the Indians work in software sweatshops for low wages. The Indians take the sweatshop jobs in the hope that their employers will nominate them for some of the 20,000 extremely valuable green cards awarded to Indians each year.

The Indian marchers and protestors in Illinois want to change the pro-diversity “country caps” law, which sets the 20,000 annual cap for Indian immigrants. They want the caps removed so that they could get at least 100,000 green cards of the 120,000 EB-1, EB-2, or EB-3 green cards awarded each year.

The American professionals who oppose the S.386 giveaway bill have organized their own groups, including U.S. Tech Workers, White-Collar Workers of America, Protect US Workers, and Progressives for Immigration Reform,

The lobby group of Indian H-1B visa-workers who pushed @SenMikeLee & @S386 is painting @SenDickDurbin as a segregationist Indian-hater. Yikes. That is not the best way to persuade Senators to rewrite the immigration system to benefit you (& US investors) https://t.co/ovzOKDQ1uH

Companies have imported roughly 35,000 H-1B workers into Durbin’s Illinois, along with thousands of additional L-1, OPT, and H4EAD workers. Roughly 75 percent of these visa workers are hired in India for a wide variety of U.S. jobs, including healthcare jobs at Southern Illinois Medical Services. But most are hired to maintain and operate computer systems for a wide variety of companies throughout Illinois’s economy.

For example, in 2010, Walgreens hired a U.S. company named Genpact to transfer 500 jobs from Deerfield and Danville, Illinois, to Indian workers. In 2012, Genpact announced that its workers were running the information technology needed by 9,800 Dollar General Corp. stores, including:

One of the most prominent Indian firms in Illinois is HCL. In 2018, HCL asked the federal government for visas to import another 747 visa workers on three-year, extendable H-1B visas. But HCL’s operations are not trouble-free: In 2017, HCL was sued by MillerCoors for $100 for failure to deliver on a $53 million outsourcing contract.

Roughly 36 percent of these workers are promised pay of less than $80,000 a year, according to Department of Labor data provided by H1BFacts.com and SAITJ.org: 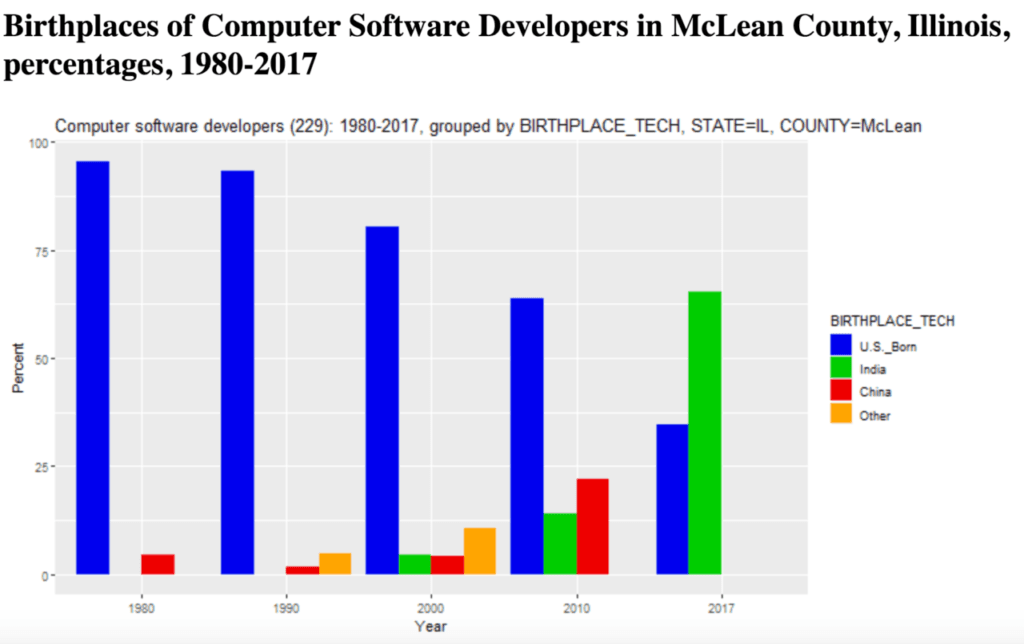 But these visa worker firms push many American middle-class professionals out of jobs and into poverty:

A picture of my entire house furniture and personal belongings in a storage facility because employers prefer to hire cheap foreign tech labor on #H1B VISAS and our government won't pass legislation to put American workers first. No to #S386 #NoS386 #S386IsNotFair #immigration pic.twitter.com/p3Kz7isOXM

The vast number of Indian visa workers who have been imported into Illinois has dramatically shifted the workforces in several Illinois countries, according to census data studied by R. Davis, a technology expert in California. 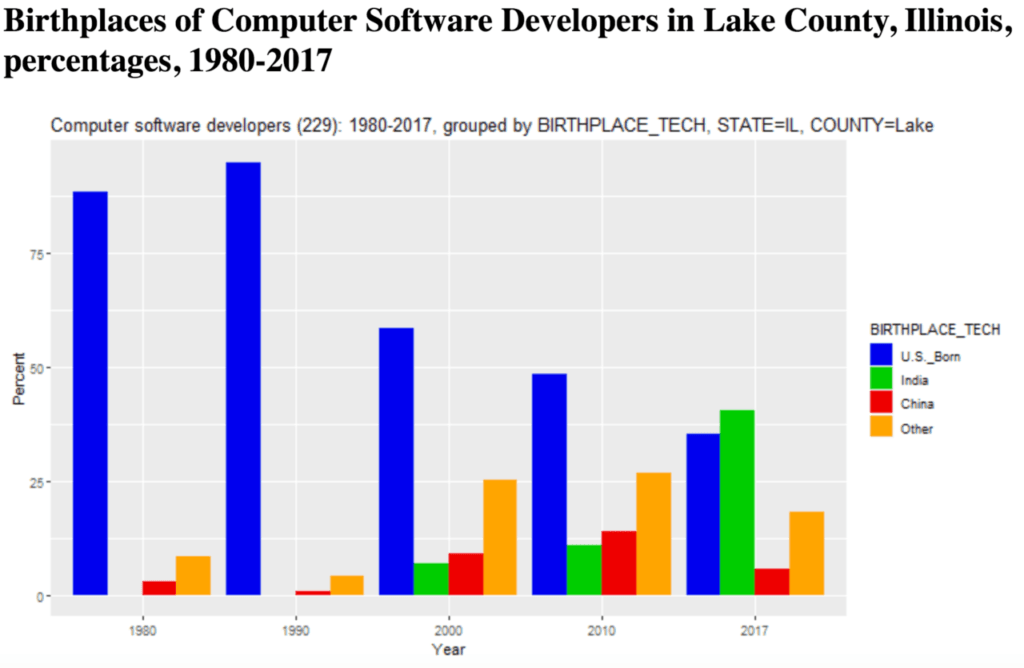 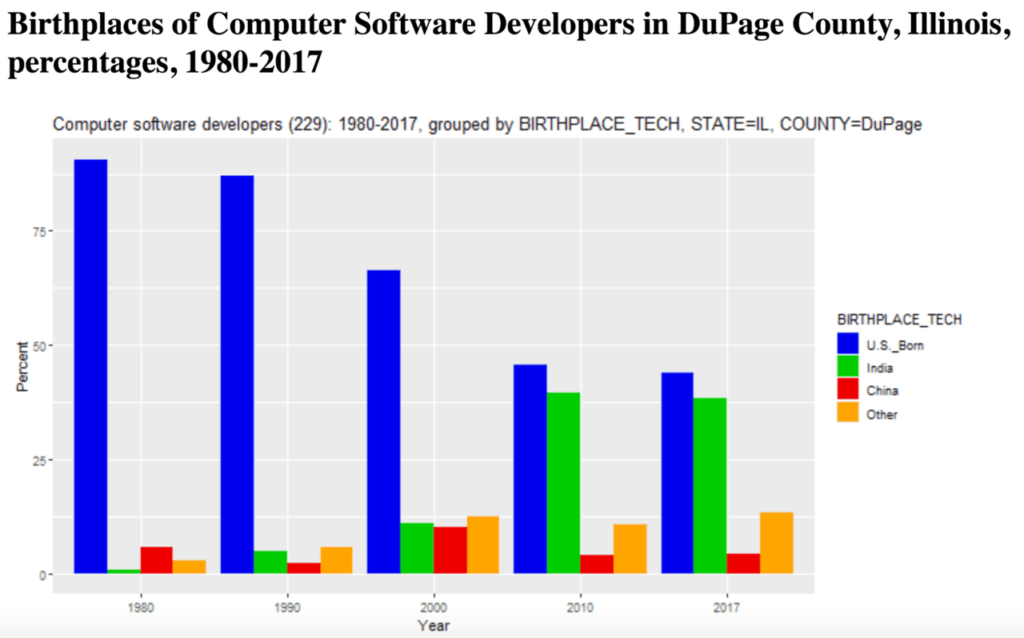 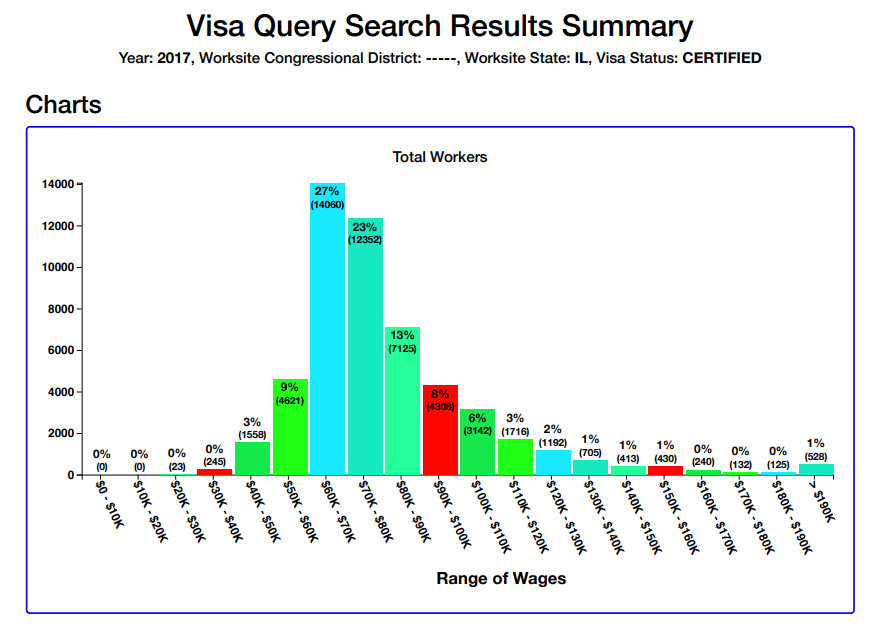