The Trump administration can declare a minor victory in the trade war.

A trio of economists from the Federal Reserve Bank of New York have posted an article on the bank’s blog, Liberty Street Economics, that challenges the claim that U.S. households are paying for tariffs on Chinese imports.

Five months ago, Liberty Street Economics wrote about a controversial study that claimed to show the tariffs were costing American households hundreds of dollars a year in the form of higher prices for imported goods. That study was at odds, however, with data on consumer prices, which have down no evidence of price hikes due to tariffs.

The key flaw in the earlier study was that it assumed that the fact that import prices were not falling to offset the higher import duties meant that the duties must be passed on to U.S. consumers. Breitbart News pointed out that this was a wrong-headed reading of the data on import prices.

Since someone must be paying the tariffs, the economists decided that U.S. importers must be paying them—and then passing on the costs to consumers. Note that they do not have direct evidence of either of these things. The idea that the importers are paying is just an inference from the unit price data and the idea that the tariffs are passed through to consumers is based on nothing more than an assumption that higher producer prices must get passed along to consumers.

The first problem with the study is that it is too reliant on reported import prices—and these are not very reliable, especially in the immediate aftermath of tariff changes.

Import values are supposed to be based on the actual prices paid by importers to foreign manufacturers, less the cost of insurance and shipping. But around one-quarter of all imports from China are valued under a different methodology because they are transactions between related parties—foreign arms of multinational corporations. The official values of these imports tend to be sticky because they have to be estimated according to various customs rules because the U.S. government is wary that companies will underprice imports to dodge any duties imposed. This puts upward pressure on reported values, at least temporarily.

The new post from the New York Fed acknowledges this:

Affiliates of multinational corporations may be leaving reported import prices unchanged for accounting reasons. In doing so, the multinational would be letting higher tariffs reduce the reported profits of its U.S. operation (rather than those of its Chinese operation).

Breitbart News also highlighted that the study simply assumed that the tariffs could and would be passed on the U.S. consumers rather than absorbed by importers in the form of narrower margins.

The latest New York Fed blog post also acknowledges that economists do not know if tariff costs will be passed on:

Who pays the tariff tax depends on how it is split between lower profit margins (for wholesalers, retailers, and manufacturers) and higher prices for consumers. Estimating this split is difficult since the distribution of any tax increase on profit margins and prices depends on the details of market structure, such as the number and size of competing firms.

Another problem with the earlier Fed study was that it did not give enough weight to the cost of lost business to China.

The second problem is that the economists missed a very important way China is paying for the tariffs: in lost sales. Imports of tariffed goods fell sharply, according to the paper. This is partly because U.S. consumers bought more items produced domestically, and partly because multinationals shifted their supply chains to avoid the tariffs, moving production from China to Vietnam or Mexico. These lost sales are a cost to China—an indication that China is paying a price for the tariffs.

Now the Fed has corrected this oversight. Indeed, China’s share of U.S. imports is crashing.

Regardless of whether consumers or businesses bear the burden, sustained high tariffs on Chinese goods will encourage a search for alternative suppliers. The chart below shows the change in China’s share of total U.S. imports by product category relative to 2017. China’s market share has already fallen by roughly 2 percentage points for machinery and electrical equipment and by close to 6 percentage points for electronics. A broader look at the trade data shows that China’s lost market share has gone largely to Europe and Japan for machinery and to Malaysia, South Korea, Taiwan, and Vietnam for electronics and electrical equipment. 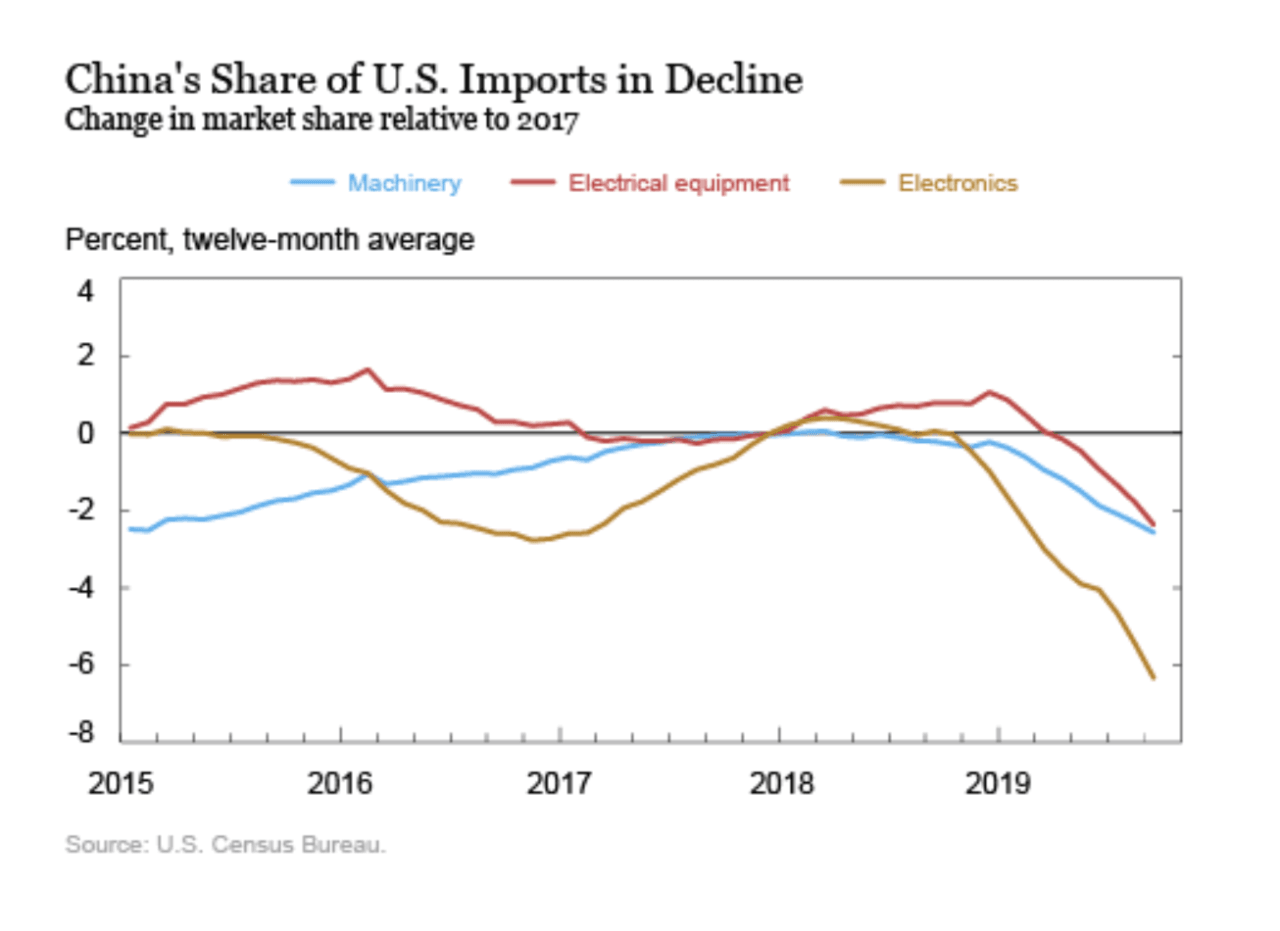 The original Liberty Street Economics post got a lot of attention from mainstream media outlets eager to claim that tariffs were hurting U.S. households. Time will tell if this overdue corrective gets the same attention.